Last weekend we attended the Giant Bicycles Demo up at Spooner Lake State Park hosted by Bike Habitat. Giant and Liv (Giant’s women’s line) had a wide variety of 2015 model year bikes to try out, both mountain and road machines. Here’s a look at what we saw. 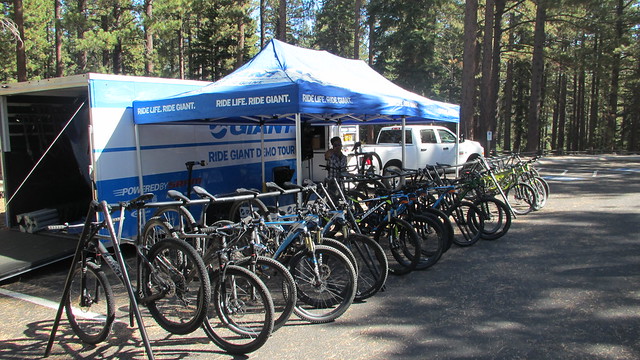 We browsed the selection of mountain bikes at the Giant tent and settled on a couple Trances and the new Stance. While they were getting the bikes all setup for us, we browsed the rest of the bikes and learned about all the new technology. The women’s line was quite extensive as well. There was a bike for almost every type of rider and pocket book. 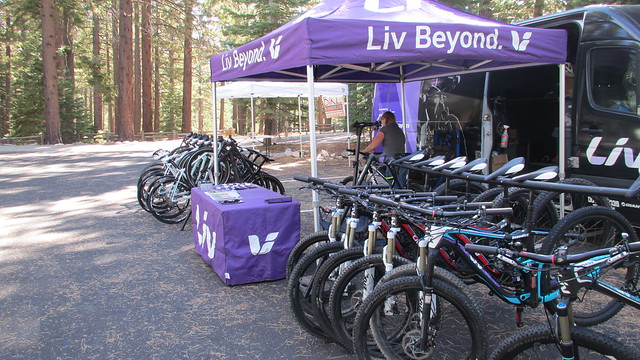 Liv – The ladies’ side

My son and I went with the Trance Advanced 27.5 1. Notable features of this high end model are the 27.5″ wheelset (Giant’s current off-road standard), 1×11 (10-42) drivetrain, superlight advanced-grade composite (carbon fiber) mainframe with 5.5 inches of suspension travel, 120-140mm adjustable travel fork, lightweight composite wheel system, and an adjust on-the-fly seatpost (seat height can be adjusted while riding via a lever on the handlebars). It’s a bike you can ride fast all day over a wide variety of terrain. With a price tag of $5,575, it was a real treat to get to take this bike out. 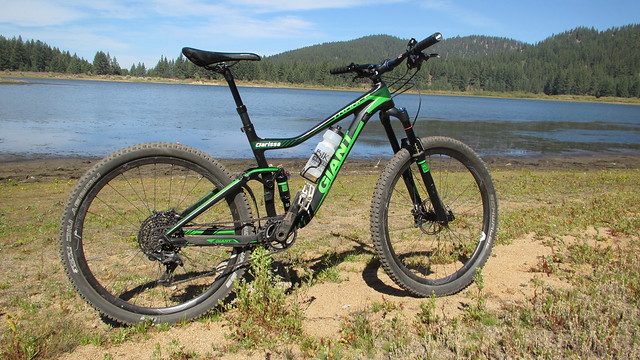 The other bike we took out was the Stance 27.5 1. It’s fairly similar in geometry to the Trance, but made for the average trail rider with a much more affordable parts package. This particular model retails for $1,875, but there is a $1,450 version of the bike as well. Notable features of the Stance were the 27.5″ wheelset, aluminum frame with 4.7 inches of suspension travel, 120mm travel fork, and a 2×10 drivetrain. I think it’s a great parts package for the price. 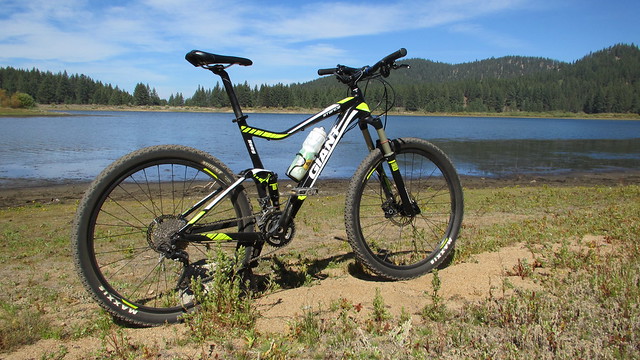 For the test ride, we did a lap around Spooner Lake, then headed up to Spencer’s Cabin and back. Although this route is what you’d call beginner level without much to challenge these bikes, we still encountered a variety of terrain: sand, hard pack, rocks and roots, bridges with step-ups and drops, and a few quick climbs and descents. It was enough to test the technology and get a feel for the bikes’ personalities. 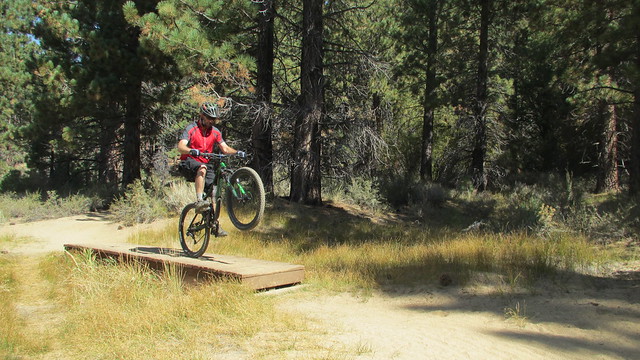 Easy to get the wheel up on the Trance

As you’d expect, the lightweight Trance was very responsive and plush. It had me looking for any root or rock to jump off. The big 27.5″ wheels felt good getting up and over the obstacles, and getting the lightweight front end up was a snap. I was also impressed with the adjust on the fly seatpost. I’ve never really considered one, but it worked so simple. It’s easy to imagine tackling some of the trickier challenges knowing you wouldn’t have to stop riding to adjust your seat. Also in the simpler category was the 1×11 drive train. With only 1 shifter on the handlebars, there’s no worrying which chainring you need to be in. The wide-ratio 10-42 rear cassette paired with the 32 tooth front chainring should be able to handle most any climb or descent. 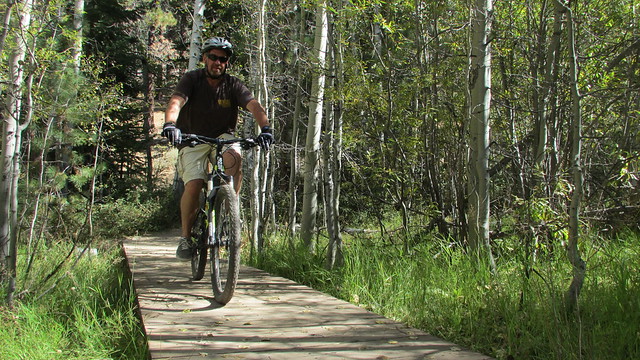 I was eager to see how the more affordable Stance compared, so we swapped bikes along the loop. I immediately noticed the front end of the bike was a bit heavier, but I wasn’t far down the trail when my body adjusted to the Stance’s different personality. It was equally at home on the smooth and twisty lake shore trail, and a lot of fun to ride. Although slightly more complicated than the Trance, the 2×10 drivetrain on the Stance worked great. Definitely less fiddling with the shifters than with the triple chainrings I’ve been riding for more than two decades. 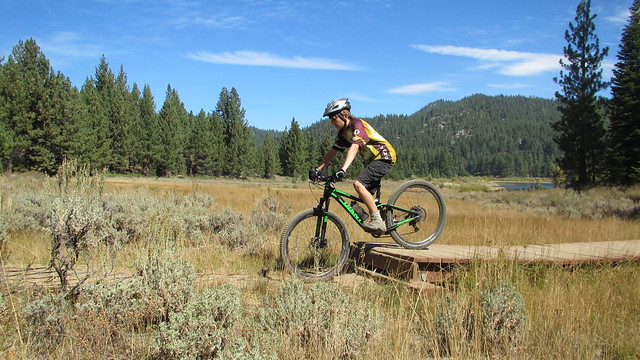 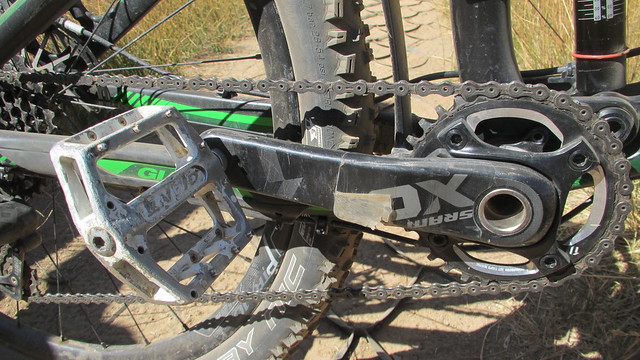 Single Chainring of the 1×11 system 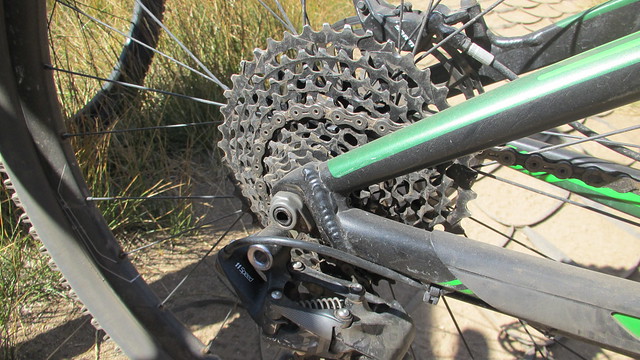 We headed back to the demo tents, and reluctantly returned the bikes. It was a shame we didn’t have some more challenging terrain to ride these bikes on. I’ve been riding 29ers for several years now, and this was my first time on 27.5″ wheels. They definitely rolled fast and made getting over the obstacles easy. They may not have floated over the sand as easily as a bigger wheel, but this may have been due to over-inflated tires (demo bikes tend to have more air pressure than I’m used to for protecting the rims from errant riders). While the high-end trance is more bike than I can afford, it sure was nice to get to ride it and see where the technology is going. The cutting-edge technology on this bike will eventually trickle down to more affordable models. The Stance, on the other hand, is in the price range that many serious riders can handle. It’d make a great bike for most of the terrain in this area. 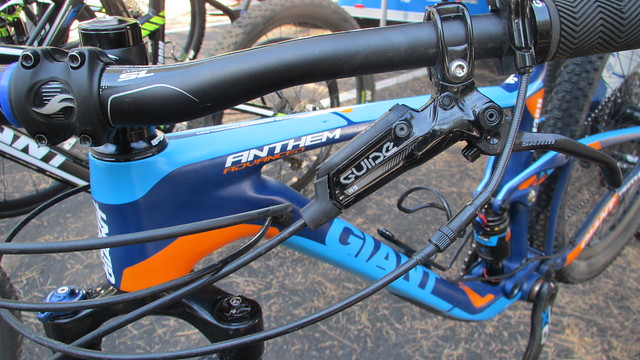 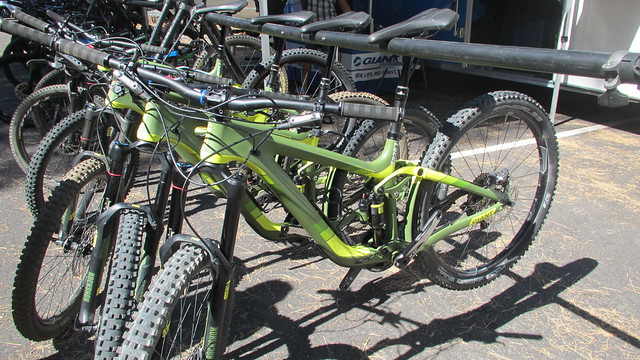 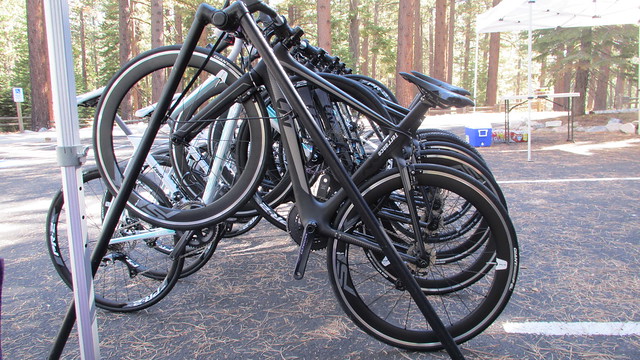 Did you attend the demo event? Which bikes did you ride? What was your favorite?