Now that Autumn has arrived, it’s a great time to explore the areas east of Carson City. These trails and back roads can be impassable in the winter, muddy in the Spring, and too hot during the Summer. This time of year, though, the dry conditions and mild temperatures make it the perfect time to go. One of our favorite Fall rides is the off-road route up to Virginia City via the American Flat Toll Road. With the area’s fun and lively Old West history, this ride has started to become an annual event. 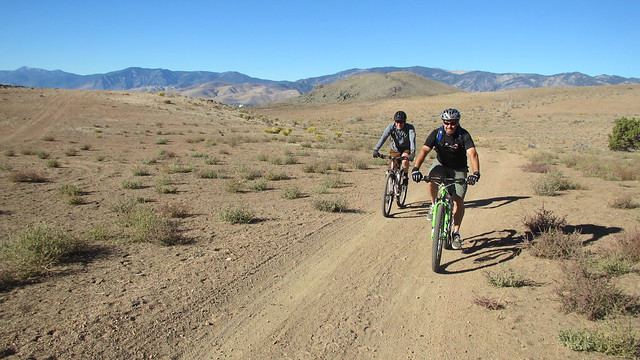 We met up at 9:00 AM at Centennial Park, and it had just warmed up enough to shed the jackets. We were treated to blue skies and plenty of sunshine, much better than last year when we started the ride in hazy smoke from the forest fires in California. Some of us had done the ride before, and for others it was the first time. And a few of us had never even met before. Nothing builds camaraderie like an outdoor adventure, though, and we’d all be friends by the end of the ride. 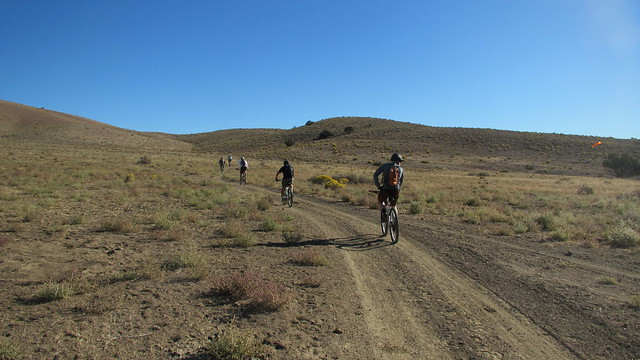 Leaving the back parking lot of Centennial Park, we started up the rocky, bumpy climb. Having just finished my coffee, it wasn’t the best way to begin the ride. At least this section is over quickly. The trail smoothed out for a relaxing climb toward Mound House, and we watched a group of paragliders take flight from a high point on McClellan Peak, landing in a flat spot near our trail. 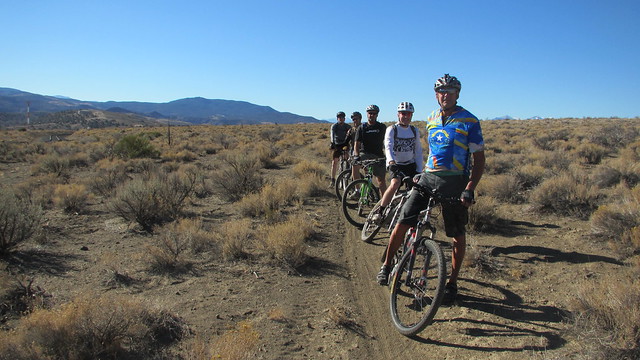 On the outskirts of Mound House

Once over the hill, we descended to the railroad tracks near Mound House, and followed trails and roads paralleling the tracks on the uphill side until we reached the water tower at the base of the American Flat Toll Road. Although just another dirt road now, these early toll roads were once profitable for the owners in the mid 1800s. Tolls of a few cents were collected for wagons, livestock, buggies, and horsemen on their way between Dayton, Virginia City, and Carson City. 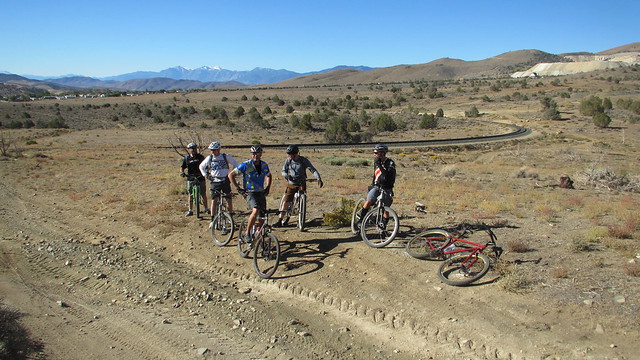 The width of the toll road allowed for side-by-side riding and conversation. Talking bikes and trails always makes the climb go by easier. A few wild horses jumped across the road as we climbed, coming a little too close to a couple of the riders for a good startle! We regrouped at the top of the climb, where American Flat and Gold Hill were visible to the north. 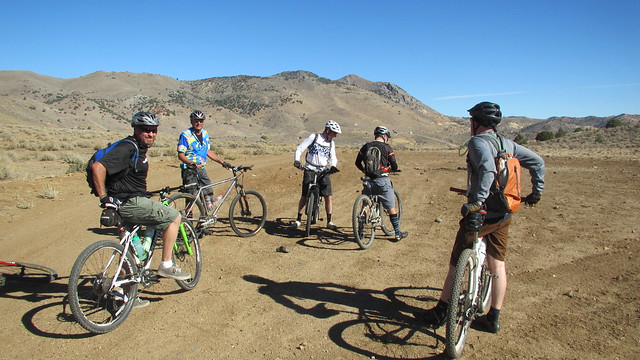 On our descent to American Flat, we paused at the railroad crossing. Down the tracks, we could see smoke billowing up from behind the hill. Just as we started to wonder if the train was coming or going, we began to hear the chugging of the steam engine. The train finally came into view, the rumbling grew louder, and the engineer blasted the whistle as he passed us. Dozens of passengers waved to us out the windows. It was a very powerful and awesome experience, and brought to mind many an old country song. 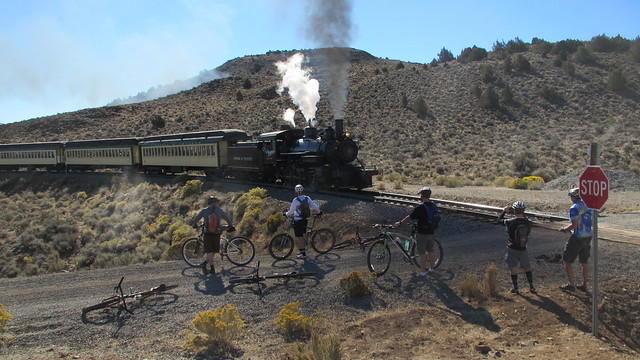 The Virginia and Truckee Railroad – Can you hear the whistle blowing?

To cross American Flat, we descended through the valley past the United Comstock Merger Mill. Once described as the largest concrete mill in the United States, the mill was built in 1922 to process local gold and silver ore utilizing cyanide vat leaching. The mill only operated for six years, and was then abandoned. The mill’s machinery was dismantled and sold as salvage over the years, leaving only the eerie concrete walls and tunnels behind. The buildings are now closed to the public due to safety reasons, but you can still ride through the area on your way to Gold Hill. 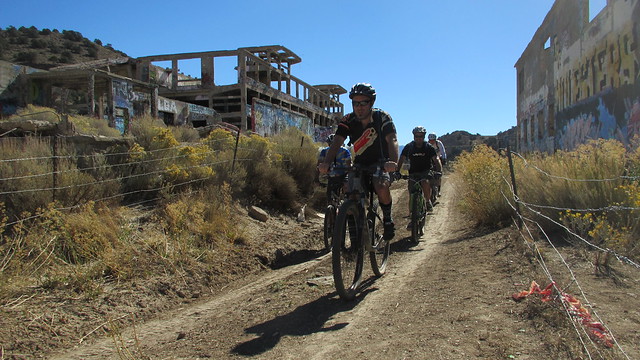 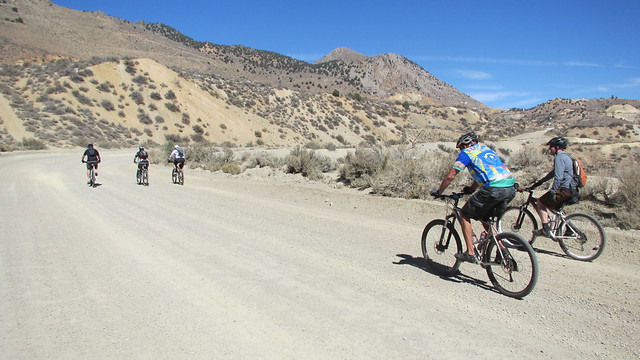 We climbed up out of American Flat to the mine road that goes down to Gold Hill. This is the widest dirt road of the ride, but it’s best to keep to the right to stay out of the way of the frequent mining trucks that use the road. One of the mine workers was even nice enough to get on the radio to let everyone know we’d be coming down the road! The descent to Gold Hill is short lived, and then the steep climb up Route 342 begins, the first paved section of the ride. 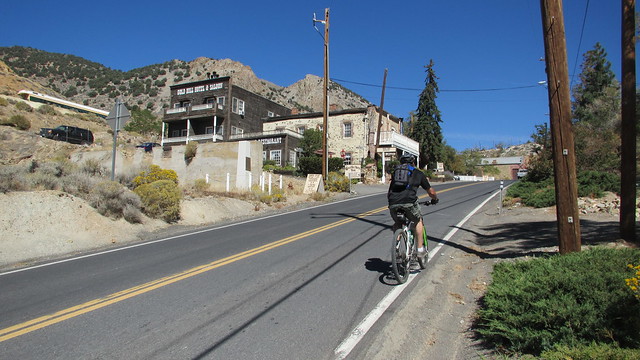 The steep climb up Gold Hill

Climbing up Gold Hill is the steepest part of the ride. We grinded up the grade, passing a few tempting signs advertising cold beer. Also along the road is the historic Gold Hill Hotel, the oldest, still existing hotel in Nevada. Claimed to be haunted by some, the Gold Hill Hotel has appeared on ghost hunter TV shows. We saw no paranormal activity on this day. Gold Hill’s population hovers around 200 people today, but once boasted a few thousand people back in the 70s. The 1870s, that is… 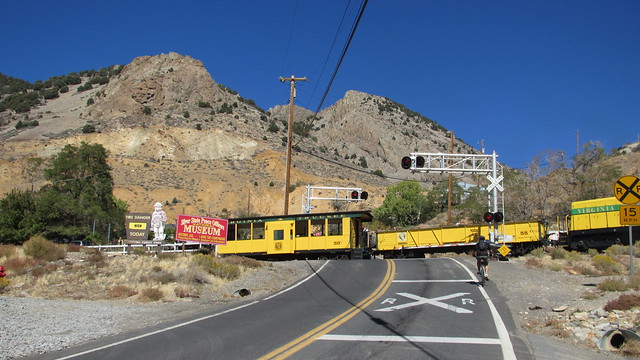 RXR and a much needed rest

Thankfully, the gates closed as we approached the railroad crossing, and we were forced to stop and wait for the train. The short break gave me just enough strength to get to Homestead Road, the first right hand turn after crossing the tracks. This little side road follows the contour of the hill, and bypasses the remaining steep climb to the summit. From here, it’s just an easy ride over to the truck route (Route 341) and into Virginia City. 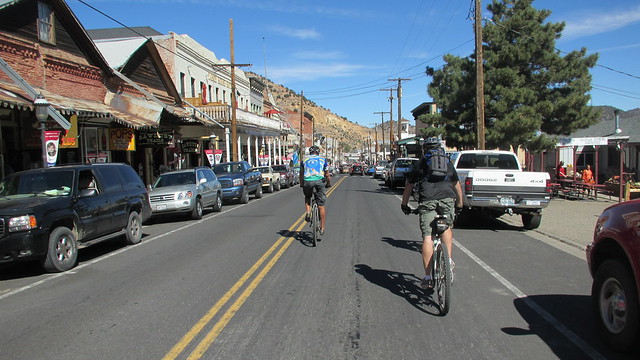 Riding into Virginia City is always exciting. The big climb is over, good food and drink await, and you never know what you’re going to see. On this day, custom motorcycles lined the streets, a banjo player was playing over a PA system, mobs of people roamed the boardwalk sidewalks, and the center of town was blocked off for outhouse races! There was activity everywhere. 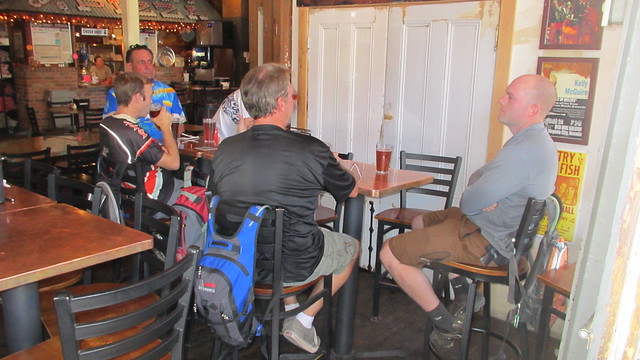 Well deserved beer and pizza at the Red Dog Saloon

As is customary, we headed to the north side of town to the Red Dog Saloon. There’s always good beer on tap here, and the pizzas are excellent. We lined up the bikes on the sidewalk outside the saloon, then went in for a couple rounds of drinks and two pizzas. Calories are your friend on this ride. 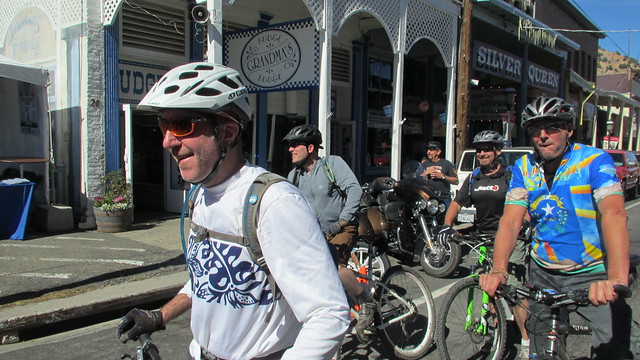 After a relaxing lunch, we talked to a few motorcyclists, then headed back to main street to catch the outhouse races. The outhouses, mounted on big tricycles, had to drag race up the hill. The rider had help though, with a team of people running behind and pushing. It was crazy how fast these things moved up the street! When the racers took a break, we slowly worked our way through the crowd on our way to the south end of town. Bicycles really are a great way to get around the crowded streets of Virginia City. 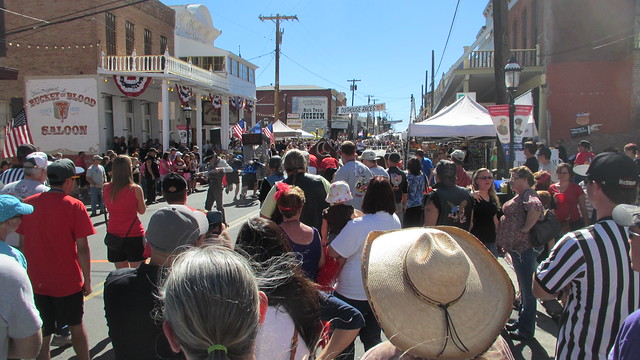 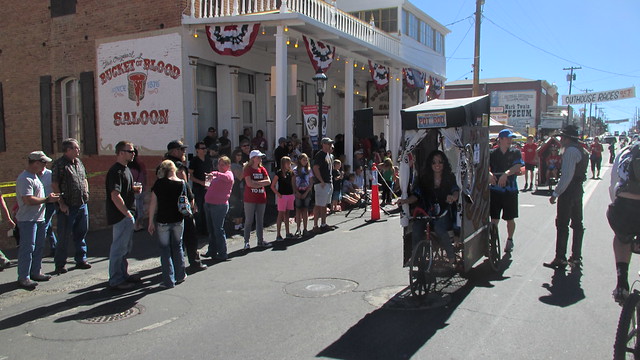 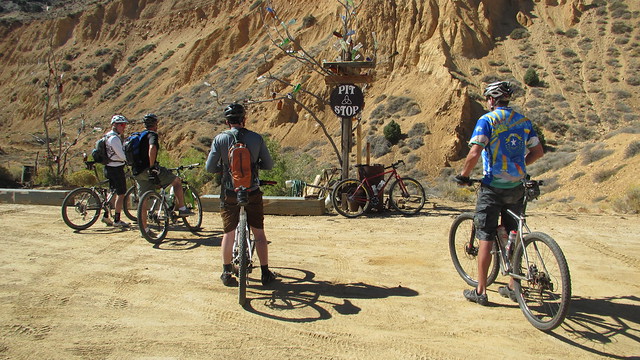 A quick Pit Stop before the descent 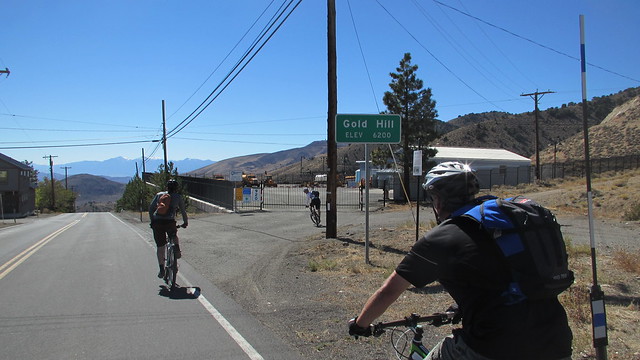 When we got to the top of Gold Hill, it was time for a fast road descent. The steep and twisty turns that we avoided on the way up, known as Greiner’s Bend, were a blast going down. Near the top, there was a car on my tail. By the time I hit the railroad tracks below, the car was no longer visible. I decided to slow down at that point. Especially since we saw horses indiscriminately crossing the road on the way up, and I had a turn onto a dirt road quickly approaching. 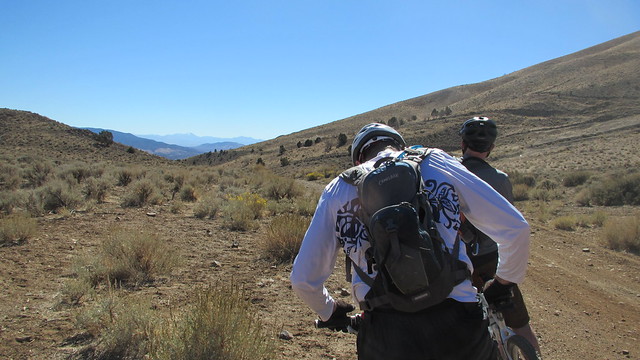 About to descend the toll road

Rather than drop down to the the old mill site, we crossed American Flat near the middle so that we lost less elevation. It’s mostly an easy ride across, with only a steep section near the end to get up to the railroad crossing and top of the toll road. Once across American Flat, it was a nice long downhill on the toll road, followed by fun singletrack all the way to the end. 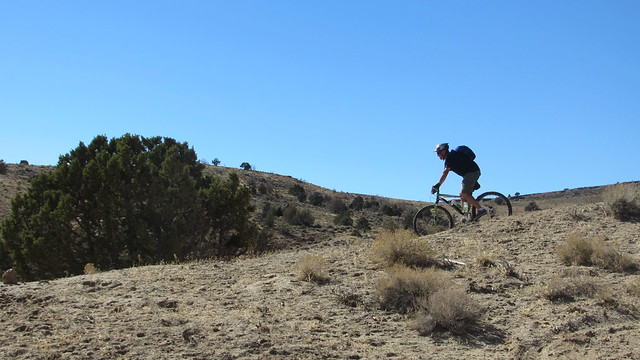 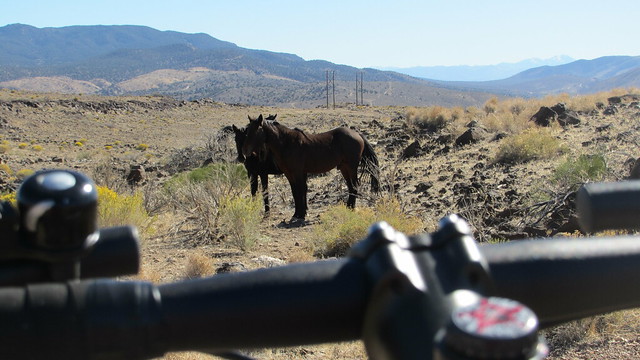 Wild Horses on the trail

Just before we got back to the trailhead, the trail took us between a few wild horses. They posed for a photo, then snorted as I cautiously passed by. It was a great ending to the Wild West ride, almost like the horses were saying, “Y’all come back now, ya hear?”. After I rest up, I reckon I will!