Last weekend we got up to South Lake Tahoe to check out some of the trails they’ve been building up there. To get to the trailhead, we headed south on Pioneer Trail road just past the Casinos, then east on Oneidas Street near Meyers. We followed Oneidas Street until it became a narrow Forest Service road known as Fountain Place Road. We parked just past the creek crossing at a trailhead parking area. 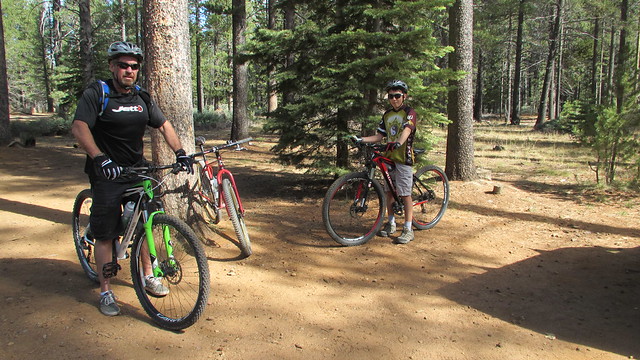 To get started, we rode up the paved Fountain Place Road. We didn’t see any other people pedaling up the road. All the other bikes we saw were in the back of trucks being shuttled to the top. Even though the road is fairly easy climbing, it looked like most people’s bikes were downhill biased. Eventually we reached the top of the Corral Trail and another parking area. 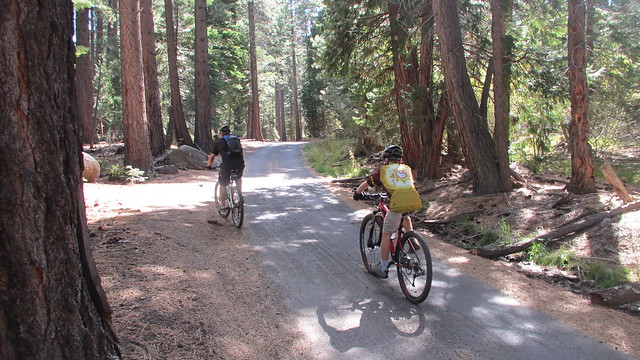 We weren’t ready to descend yet, but wanted to get off the road and onto some dirt. We decided to try climbing the Armstrong Connector Trail. It started off nice and easy with some long sweeping turns, but then started to climb over a lot of rocks that were much easier approached in a downhill direction. We kept going for a while, but then decided to turn around. It was definitely getting more technical than I wanted for my son and his new bike. We would have been better off keeping on the paved road to get to the top of the Armstrong Connector. 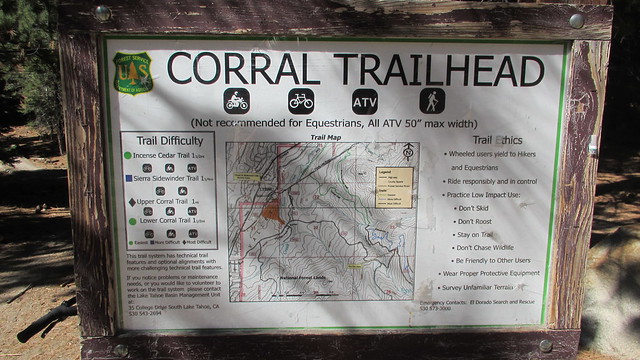 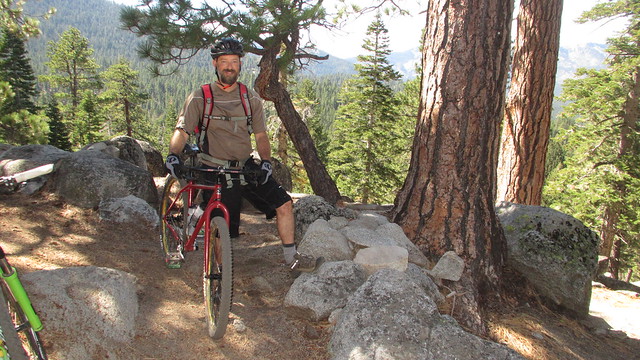 Enjoying the view on the Armstrong Connector Trail 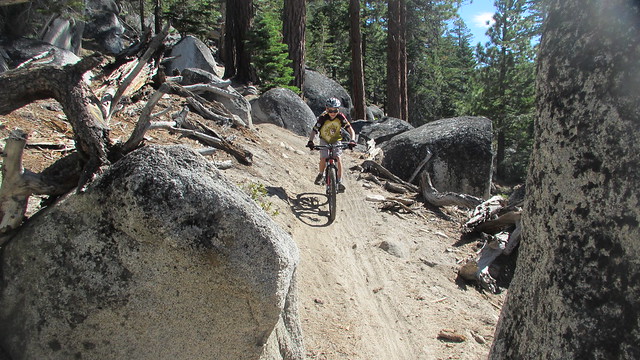 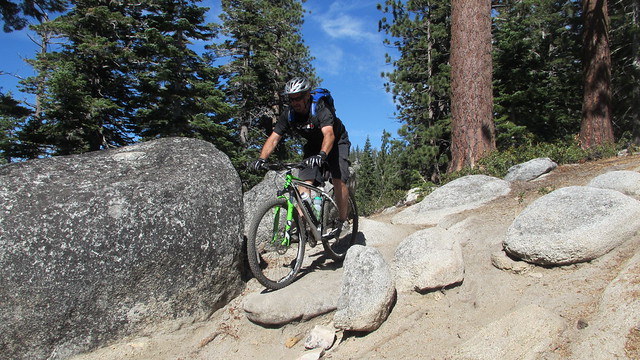 Negotiating a rocky corner on the Connector Trail 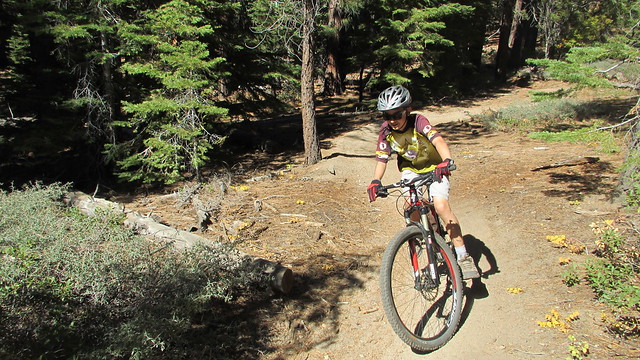 We had some fun descending the connector, only having to walk over a few of the biggest rocks. Eventually we were back at the top of the Corral Trail. The Corral Trail immediately splits, and we took a right onto the Sidewinder Trail. This trail is named for the many twists and turns it makes as it snakes down the hill. Instead of methodically switchbacking down the hill as many trails do, there is an overabundance of turns on this run. Their purpose is purely for amusement, and keep the rider turning and guessing which way the trail is going to go next. It was a blast! 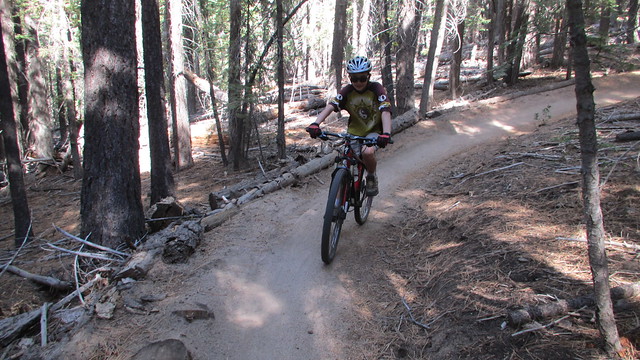 One of the many turns of the Sidewinder Trail 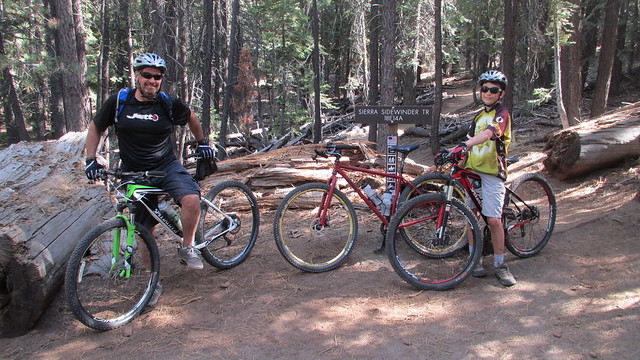 We merged with the Corral Trail after finishing Sidewinder. The Corral Trail in this section is built full of jumps and big berms that give it a BMX/Pump Track feel. It was easy to see why so many people were shuttling up the hill with long travel bikes. The jumps are primarily tabletops with mellow take-offs, so even the novice can get a little air without too much fear of crashing. At one section, the trail split in two. Tabletops on the left, and a bobsled looking set of turns to the right. We couldn’t make up our minds, so went down the jumps, then pedaled back up and did the turns! All along the way we passed rideable features like big rocks and logs. It wasn’t until I passed them and looked back that I decided I could actually ride some of them. There is a lot of variety on this trail, with many challenges to keep you coming back to test your skills. 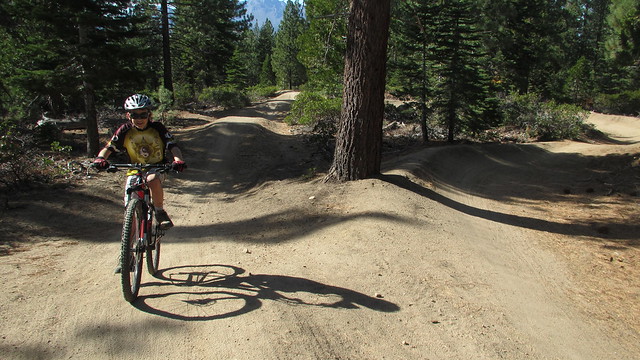 Coming back up the Corral Trail to try an alternate route

I got some photos of my son going through the berms, then sped off to chase him down. I was starting to think he got way ahead of me, when I came around a shady corner to find him and the bike on the ground and a lone shoe on the other side of the trail. Someone was having a little too much fun and got crooked off the jump it appeared. We dusted him off and finished the trail. 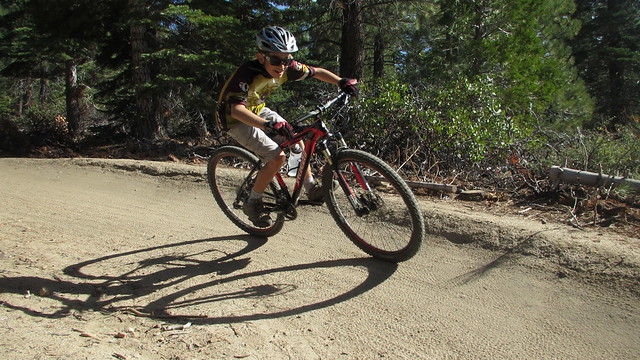 Fun berms on the Corral Trail

At the bottom of the Corral Trail, we explored the Railroad Grade Trail. As its name suggests, it’s a mellow trail with a gentle grade. We explored it a little ways, then turned around and headed back to the trailhead. Its a great beginner trail, or a good trail to connect to other area trails. 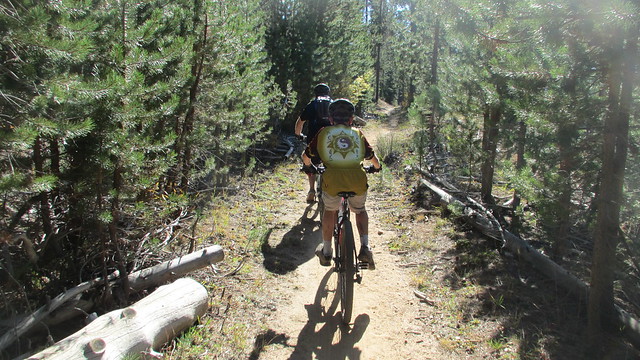 These are some FUN trails. Although it’s possible to ride up these lower trails, they’re definitely designed with the downhill direction in mind. Climbing Fountain Place road is definitely the better option to make a loop. Had we not wasted energy on the Armstrong Connector Trail climb, we may have done another loop on the Corral Trail. I’m looking forward to trying these trails again, hitting the sections we missed, and explore the upper trails that connect Star Lake, the Tahoe Rim Trail, and Monument Pass.

One thought on “The Corral Loop at South Lake Tahoe”