A few years of below average snowfall has rendered Washoe Lake a small pond. It doesn’t happen very often, but occasionally Washoe Lake will disappear completely in such conditions. After a recent hike out onto the dry lake bed to investigate the conditions, I realized what a fun ride it’d be to explore the area on fat bikes while we had the chance. It also happened that our first window to do the ride came about during the evening after the sun went down.

We parked in a small pullout along the south shore of the lake, turned on the GPS to help us find our starting point on the way back, and then scrambled down the bank to the high water mark. Just past a 6 foot wide sandy beach we pushed through some willows and down onto the weed covered lake bed. We pedaled through the crunchy weeds for a couple hundred yards, keeping an eye on the tires for stickers. Quickly we were out to where the water had receded more recently and onto the dried mud. 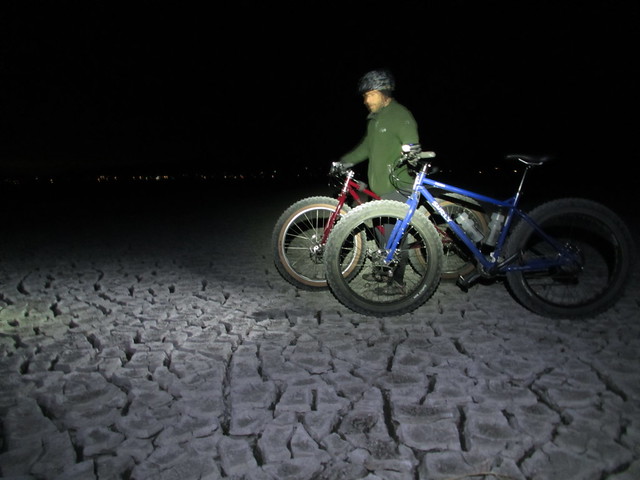 After riding for a time on the hard pack, we got out to an area where the mud was dried and separated by big cracks. Although dry on top, the cobble-like chunks floated on gooey mud underneath. It was a very strange sensation riding over this area, with each individual chunk of mud moving and sliding its own direction. The bikes felt wiggly, almost like all the spokes were loose. I actually had to stop once and make sure my tires hadn’t gone flat from the weeds before. 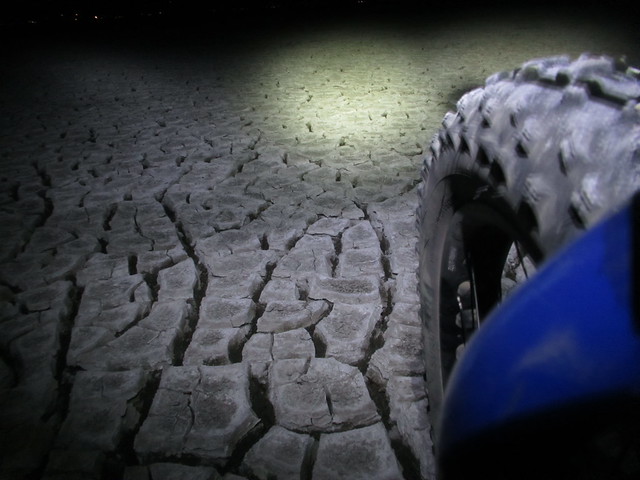 As we headed north, we could see the lights from the freeway to the west and Reno to the north. We also used the ground to keep us on track. If there were too many weeds, we knew we were drifting too far towards the shoreline. Too muddy, too close to the water. 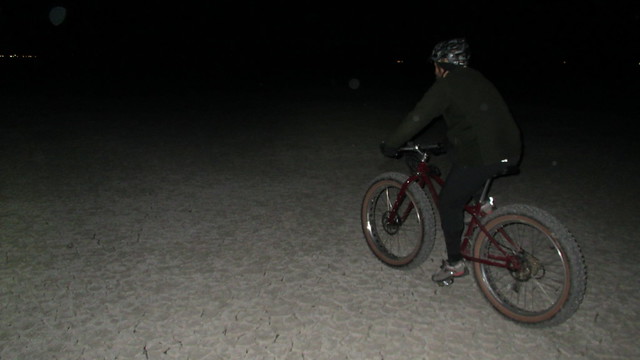 Eventually we decided to break to the northeast. We weren’t sure how far we’d gone north, and weren’t sure where we’d end up. After a while, we began to see the silhouettes of the east shore trees. Just as we were discussing where we might be, a picnic table appeared in the darkness ahead. By chance, we had made a random straight line to exactly where we trying to go! We stopped for a rest and a beer at the picnic table before returning to the south. 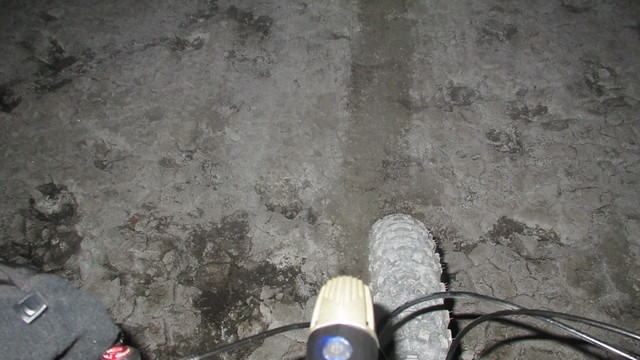 The east side of the lake is quite a bit different than what we’d already ridden. Sand dunes border the shoreline, and the water is closer. With the lack of any recent weather events to smooth them out, the dunes were pretty choppy with horse prints. We headed southwest towards the water, but when we got too close, we were met with the repelling stench of stagnant water. We found a happy medium between the two zones, and had a nice cruise picking our way through the terrain. 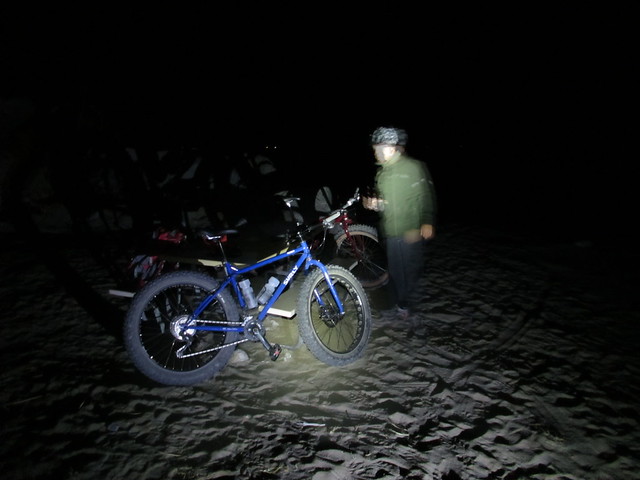 Once past the lake area, the ground firmed up and smoothed out again. We decided to turn off the lights for a while and let our eyes adjust to the darkness. The moon was not up yet, so we almost had to look directly at the ground to see any detail. We kept this up for nearly a mile, then went back to lights mode. 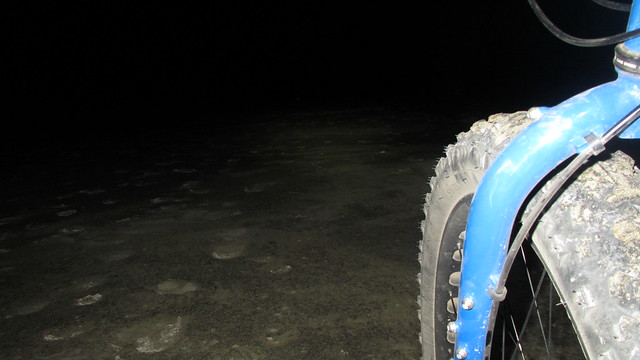 As we approached the end of our ride, we began an effort to find our vehicles in the dark. Along the way we scared up a herd of deer bedded down in the bushes. It was pretty cool to see all those eyes watching us in our lights. I examined the tire tracks I was leaving, and realized  they were really faint. I decided it was highly probable that I had ridden right past our tracks from the beginning of the ride. Finally I had to consult the GPS to see where we were at, and discovered we had overshot the trailhead by about a quarter mile. We didn’t get as lucky as we did with the boat ramp! 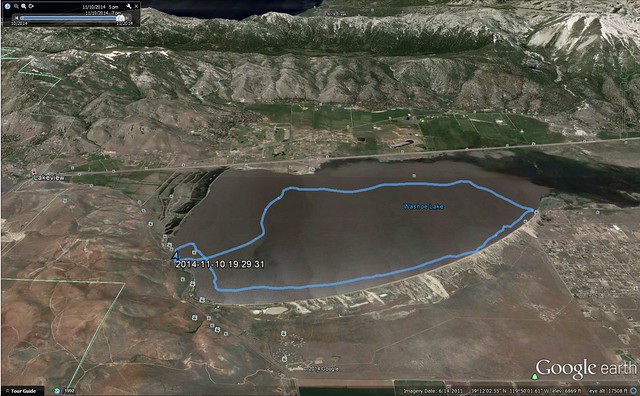 The loop we made was about 8.5 miles. Some of the terrain was like nothing I had ridden before, and riding it at night made it all the more adventurous. I’m glad we got the opportunity to do this ride when we did, because it won’t be long before the lake bed becomes too muddy or refills with water. If this looks fun to you, get out there and do it soon!