Incline Village, NV – The Nevada High School Cycling League is hosting a new documentary film about the sport of high school mountain biking. Recently added as one of the emerging leagues of the National Interscholastic Cycling Association, the Nevada League will be officially launching a league race series in Fall of 2016. A handful of demonstration races to get more kids involved will be planned in 2015. 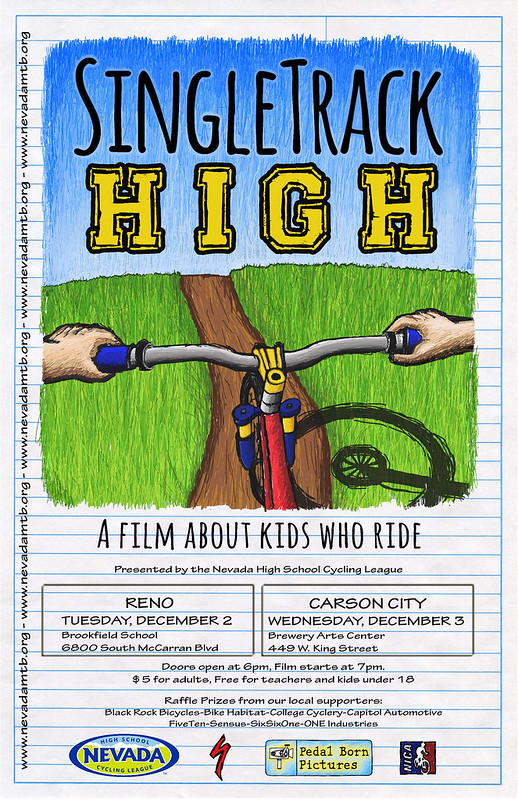 “SingleTrack High”, produced by Pedal Born Pictures, follows a diverse group of high school student-athletes through the 2012 mountain bike racing season in the NorCal High School Cycling League. For Eliel, high school bike racing is a competitive outlet at the highest level. For Carlos, it is a means to escape the rough neighborhoods of South Sacramento. For Mackinzie and Allie, it is a chance to break into a sport traditionally dominated by the boys. These are some of the kids of “SingleTrack High,” Through their experiences, the film explores the positive impact high school mountain biking can have on boys and girls alike, from all walks of life.

Filmmaker Jacob Seigel-Boettner, who produced the film with his brother Isaac, said, “Even as former high school and collegiate cyclists, it was an eye-opener for us to see the impact that racing in the NorCal League has had on these kids. Being part of a high school mountain bike team has helped them find acceptance, accept themselves, and expand their worlds.”

There will be two screenings hosted in Northern Nevada. On Tuesday, December 2 at the Brookfield School, 6800 S. McCarran Blvd in Reno and Wednesday, December 3 at the Brewery Arts Center, 449 W. King Street in Carson City. Cost is $5 for adults with no charge for teachers or educators and kids under 18. Doors open at 6pm with the movie starting at 7pm.

Ticket sales benefit the Nevada League and 100% of the proceeds support our mission of providing safe, quality high school mountain bike programs for student-athletes and teams from public, charter and private schools throughout the state. Immediately following the movie there will be a presentation about the future of the Nevada League and how to get students, parents, coaches and teachers involved.

Cost: $5 for adults, free for teachers and kids under 18.