After a long wait with much anticipation, I finally got a chance to take the new fat bike out for its first snow ride. Acting on a tip that there was good snow cover with several miles of snow machine tracks up near Carson Pass, I loaded the bike up in the car and headed up to Red Lake on Highway 88. 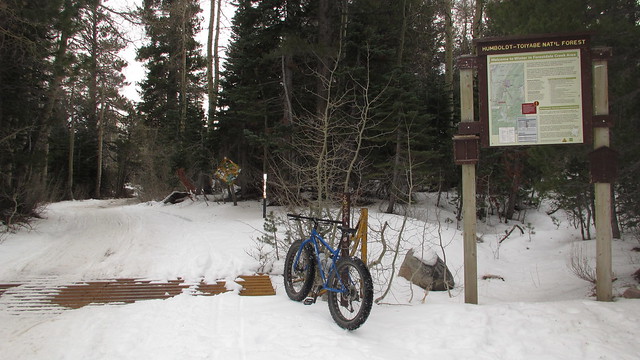 Getting started at Red Lake

As I left the Carson Valley and made the drive up to Carson Pass, the thermometer in my car started climbing. Just above freezing in the valley below, it was now in the upper 40s as I passed Hope Valley! The incoming storm was bringing warm air in from the southwest, and I worried it would ruin the snow conditions. When I arrived at Red Lake, I found ample, plowed parking along the side road to the dam. I unloaded my fat bike with its 4″ wide tires aired down to 6 PSI, and headed down the snowy road to the south. 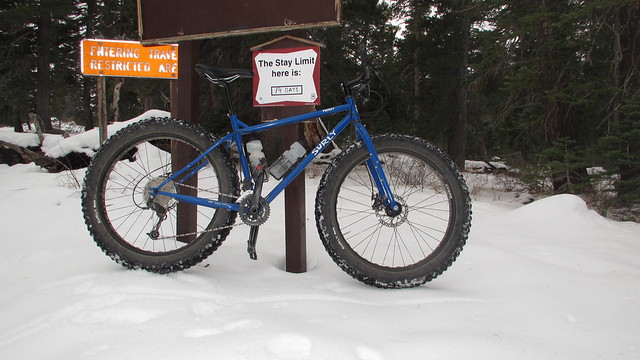 I started off really slow down the road, not sure what to expect from the warming snow. Not wiping out in the first 10 feet, I let off the brakes and let it ride. Numerous snow machine tracks packed the snowy road down nicely, its corrugated surface providing additional traction for my knobbies. A few of the big icy puddles made me nervous as I skirted around them. There was no way to tell how deep the puddles were, but I knew for sure I didn’t want to fall in one. 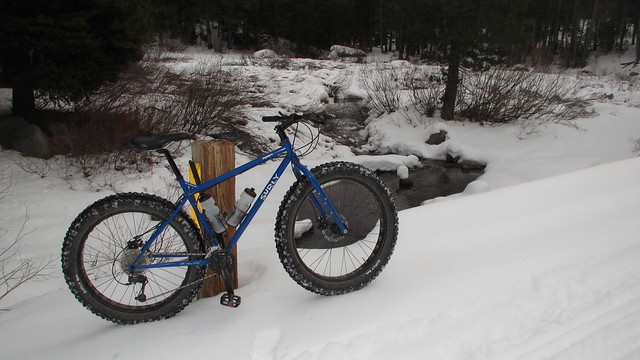 As the road got steeper, the soft snow started taking its toll on me. I had to rest a lot, and I ended up pushing the bike often. There were even a few times when I considered heading back to the car to trade the bike for the snowshoes I had brought as a backup plan. Being in the woods with no real views, though, the allure of wanting to see what was around the next corner or over the next hill kept me going. I knew I’d be rewarded if I persisted. 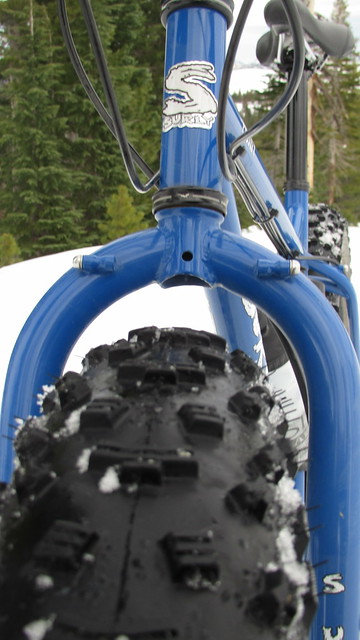 Soon the road climbed steeply, and views of the area began opening up. It also started getting colder as I gained elevation, and the snow became firmer. The bike was now climbing even the steepest hills, the trail requiring less effort and less walking. More fun, less toil. 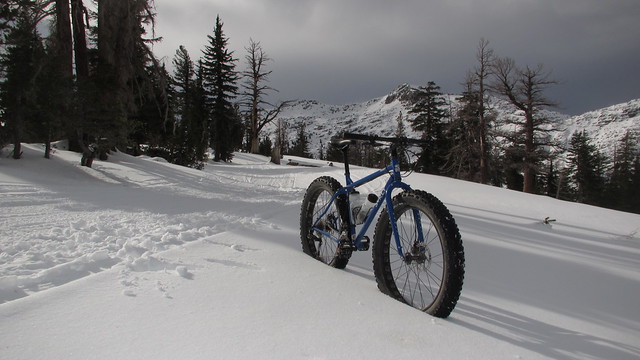 One of the frequent breaks along the climb 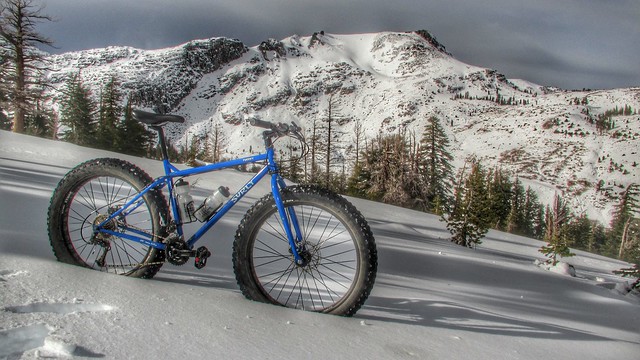 View of Elephants Back Peak

I eventually made it up to an open bowl with spectacular views. The rugged mountains of the Mokelumne Wilderness to the west, Hope Valley to the north. I wanted to continue climbing south to the pass to see Blue Lakes and the Carson Iceberg Wilderness, but the wind from the incoming storm was really starting to pick up. Blowing snow was pelting me in the face, and a couple of the wind gusts hit me so hard it turned me and the bike around 180 degrees! Further exploration into the backcountry would have to wait until next time. 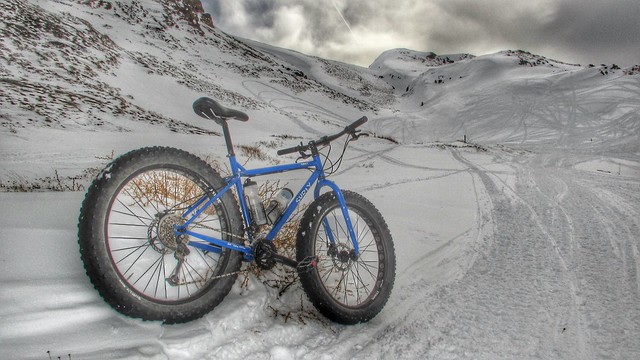 Starting to get windy!

Before starting my descent, I decided to push my bike a little further up the snowy bowl. It reminded me of being a kid and taking the toboggan as far up the hill as I could for the longest run possible. Slowly up I went, digging my boots into the snow for traction. As steep as it was, I thought it’d be a miracle if I didn’t go over the handlebars on the way down! 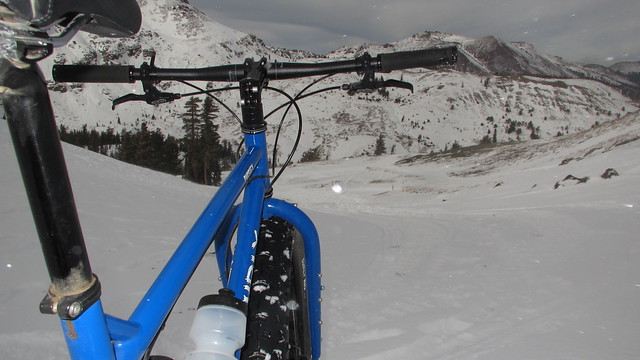 Time for some downhill!

It was time for some downhill. Time to see if all the effort to haul this big bike to the top was worth it. I hopped on the bike and quickly got my weight back so the front tire wouldn’t dive into the snow. I was off and rolling, slow at first to build confidence, then whoosh! down the powdery bowl back to the main road. 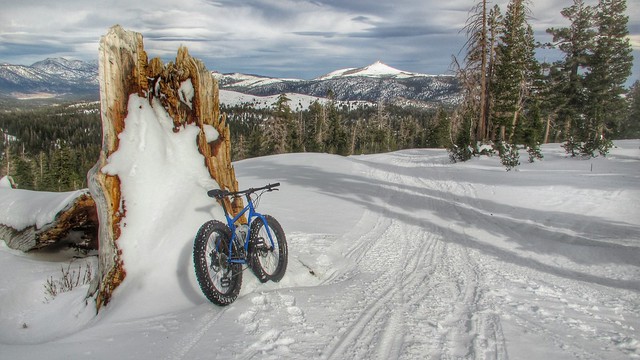 View of Hope Valley to the north

Once on the main road and onto the hard packed snow the real fun began. Traction and flotation were at maximum, and I was flying down the trail. Over the hills, around the corners, and through the trees I sped. I felt I could have gone even faster, but couldn’t shake the image of doing the superman over the handlebars if the front wheel suddenly sunk in. 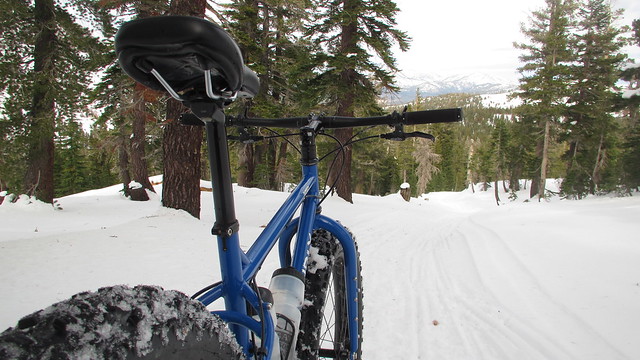 What a great descent!

After I dropped a few hundred feet of elevation, I was back into the warm snow. It went from total control to riding through freshly mashed potatoes in an instant. I kept the bike upright, but a lot of energy was expended trying to find balance and fight the sloppy ruts. Finally, near the bottom, the front tire washed out, and I went down in what felt like a slow motion lean, with a full body roll into the soft forgiving snow for the finale. 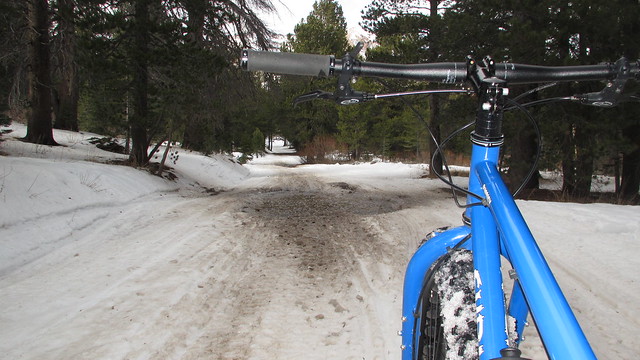 I swapped out my wet gloves for some dry warm ones, then made the final slow-going ride to the trailhead. The snow had warmed up considerably since the way in, so even the flats required a really low gear to keep moving forward. By the time I made it back to the trailhead, it was 50 degrees out! The day’s ride was definitely a good learning experience about how temperature affects the riding conditions. After only six miles of riding, I was worn out. Although I still consider the ride a success, I’ll make sure it is near freezing the next time I go out (which will be soon!). 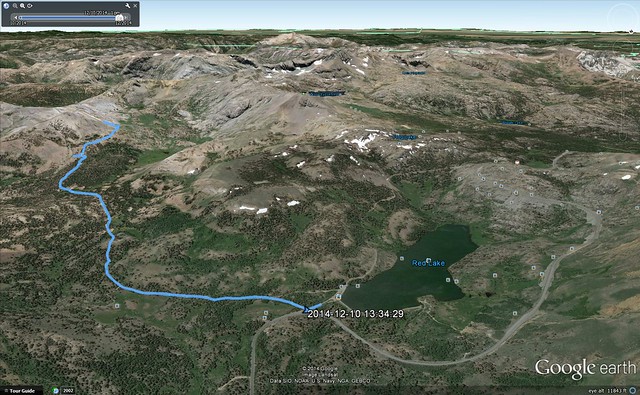 Planning tips if you go:

The mountains, especially in the winter, can be unpredictable, so be prepared. Short daylight hours and rapidly changing weather conditions warrant carrying more gear with you than a summer time mountain bike ride. Here are a few planning tips: