Saturday, August 29th was the grand opening of the long awaited Ash Canyon to Kings Canyon trail. This non-motorized multi-use trail is seven miles long, and connects the Ash Canyon trail system to Kings Canyon Road (Lincoln Hwy) and the Longview Trail. Though the trail was designed with mountain bikes in mind, it is suitable for runners, hikers and equestrians. Trail construction began on July 1st, 2012, with most major work being wrapped up earlier this year. Final touches such as informational signage were completed in just the past few weeks. Now at completion, Carson City has a world-class mountain biking trail, on par with other famous local trails like the Tahoe Rim Trail. 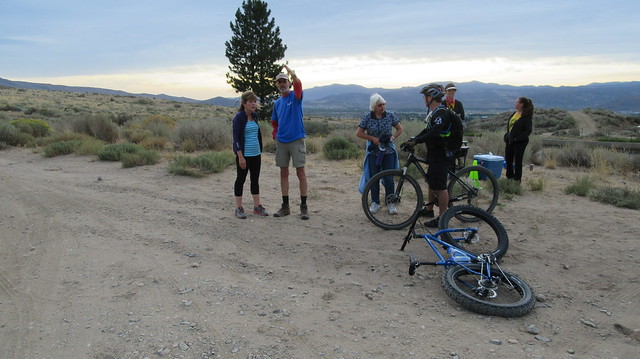 Making the ride and trek up to the trailhead

Although construction began in 2012, planning for this trail started back in 2007, a project that Muscle Powered’s Jeff Potter took the lead on. Scouting out the trail alignment was no easy task. I joined one of these early expeditions along the steep canyon walls of Ash Canyon. We made our way through thick brush, downed trees, and loose rock, the treacherous slope threatening to twist ankles at the first misstep. Potter was able to visualize a mountain bike trail cutting through this mountainside wilderness, while I was more concerned about trying to empty the rocks out of my boots and not falling down one of the many steep drainages. This was just one of many trips trail crews made in an effort to layout the future trail. 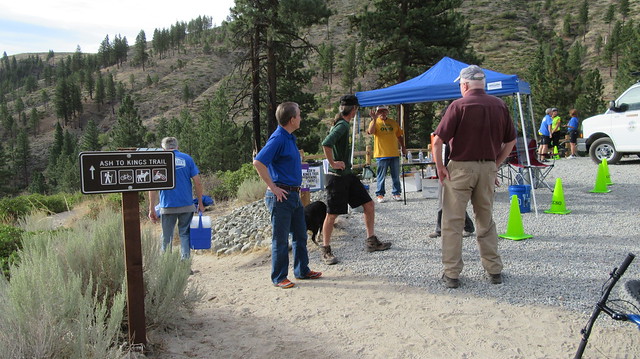 At the Ash Canyon trailhead

Once a rough idea of where the trail would go was established, there was the approval and funding process. Environmental and archaeological studies needed to be conducted. And with the trail crossing different jurisdictions, approval from the city and the U.S. Forest Service had to be granted. The Forest Service oversees an enormous area, and it can take a while for your project to come up in their queue. You must be patient. After studies were completed, trail alignments adjusted and approved, it was time to build a volunteer work force. There was no shortage of volunteers, but they’d all need to be trained and equipped with tools and safety gear. Even insured. Thankfully there were groups that stepped up to help with all the funding to get the project started. Carson City Open Space provided seed money that was used for grant reimbursement , and Jenny Scanland from NV State Parks was able to secure grants from the Recreational Trails Program. The city helped to cover the cost of workman’s comp insurance. Other private firms became involved to assist with bridge design and additional trail crews. A cast of many came together to get this trail built. 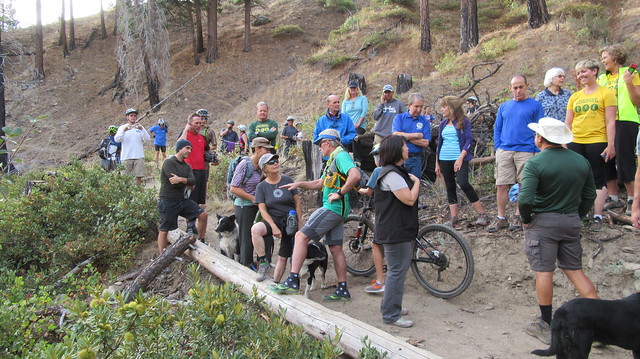 Once trail construction finally began, trail crews started at both ends. Trail crew leaders Oli, Keith and Toby set a very high quality standard from the first rock that was laid, which set the bar for every trail workday after. Smaller sections were built and eventually joined together. When the winter snow arrived, crews had to wait several months for the melt off before they could begin again. Local businesses sponsored trail work days, and many from the community donated their free time to lend a hand. People of all ages came out, the kids working alongside the retired, everyone eager to see the completion of the trail. 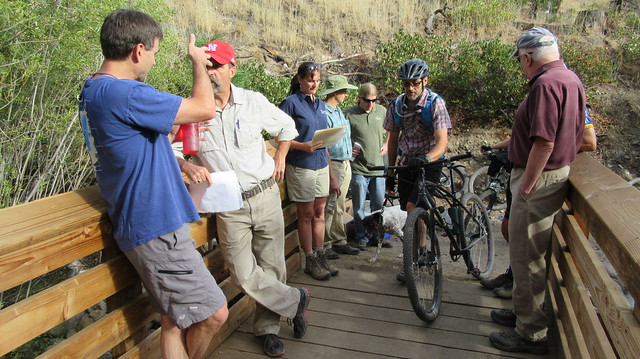 So it was with great pride on August 29th when around 100 people showed up for the grand opening ceremony to celebrate the new trail. So many people had a stake in this project, whether doing the heavy work or assisting administratively. Some attendees rode or hiked up Ash Canyon to the trailhead, and others were shuttled to the event. Everyone gathered down the hill from the trailhead at the Ash Canyon bridge. The Mayor, Board of Supervisors, trail crew leaders, and representatives from Muscle Powered, Parks and Recreation, NV State Parks, Lumos and Associates Engineering, Great Basin Institute, Carson City Visitor’s Bureau, and the U.S. Forest Service were all onsite, and many had great words to say about the project. Leaders took their turns with the ribbon cutting, a “ribbon” made up of bicycle parts and running shoes. But of all the people that made this trail possible, it was Jeff Potter that was the big star of the day. While many of us helped out when it was convenient, Potter lived it. He sacrificed countless hours in all sorts of weather up in the canyons over the last several years to see this project through. 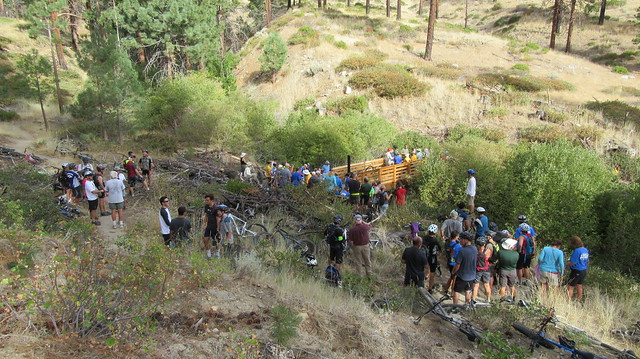 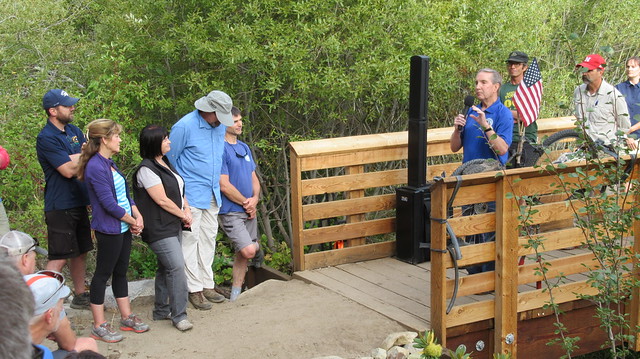 Mayor Bob Crowell addresses the crowd. Board of Supervisors on the left 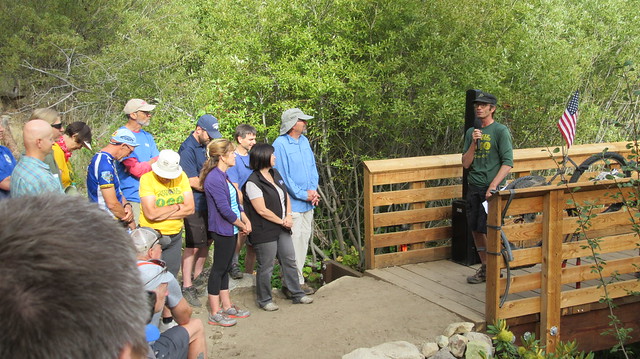 Muscle Powered’s Jeff Potter, the lead on the trail project 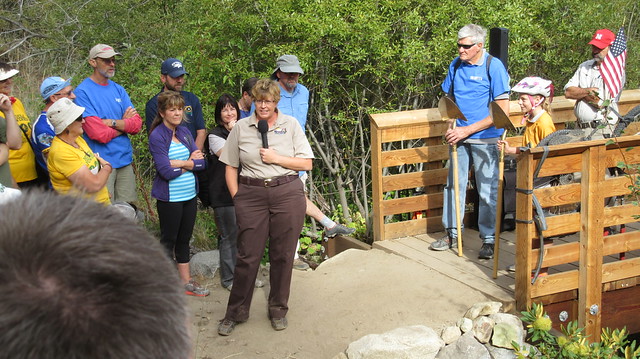 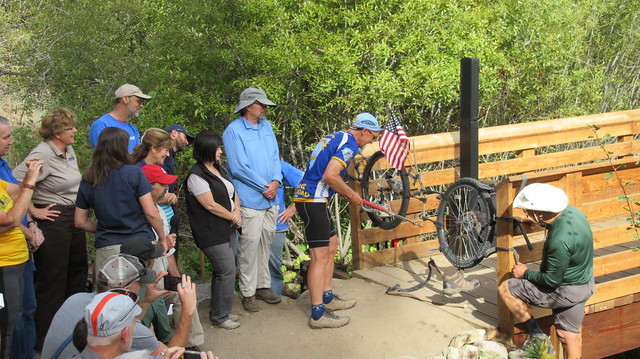 After a great ceremony, it was time to enjoy the trail. Bikers and hikers, young and old, took to the trail to enjoy the rest of the day. Sunny clear skies offered trail users views of Carson City, Washoe Valley, and the Carson Valley as they climbed to the trail’s high point at 6,731 ft elevation. And of course, what goes up, must come down. Our group enjoyed a long descent down into Kings Canyon, finishing up at a picnic provided by Lumos and Associates at the bottom. Here are a few photos from the ride. 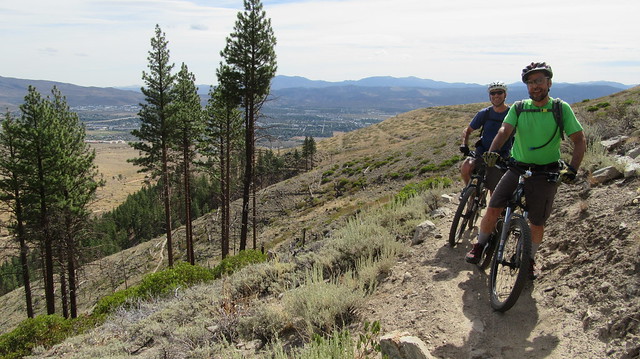 Climbing up out of Ash Canyon 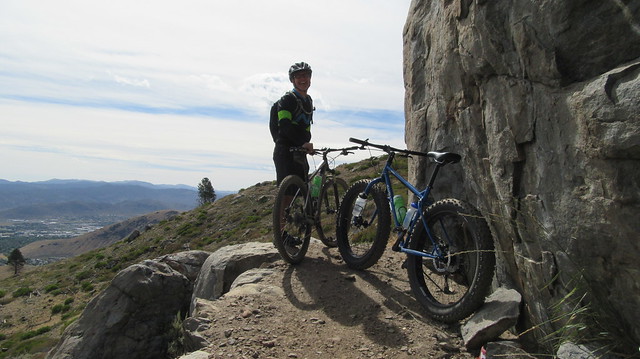 At the boulder overlook 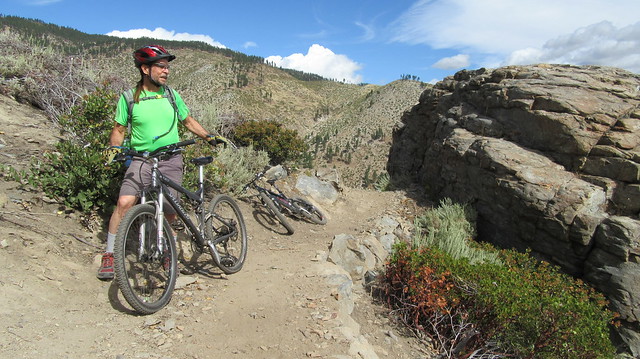 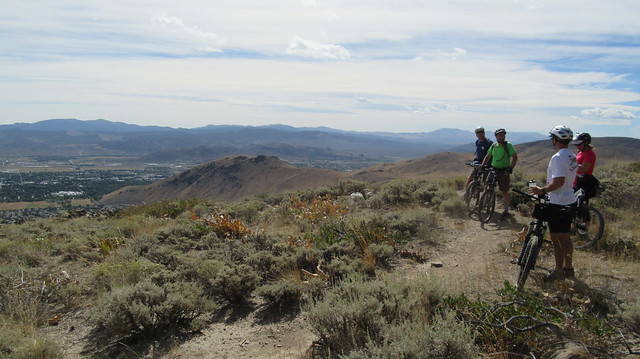 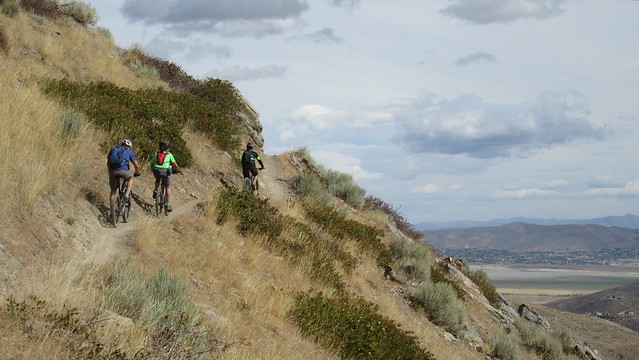 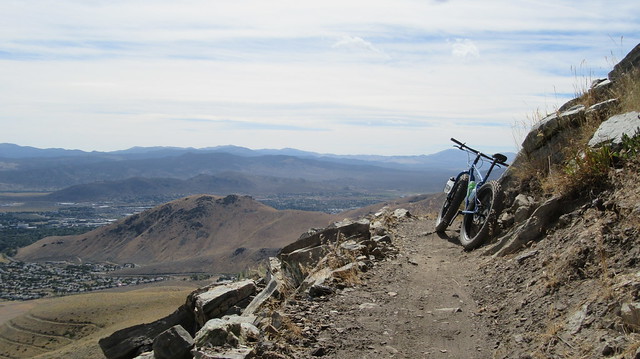 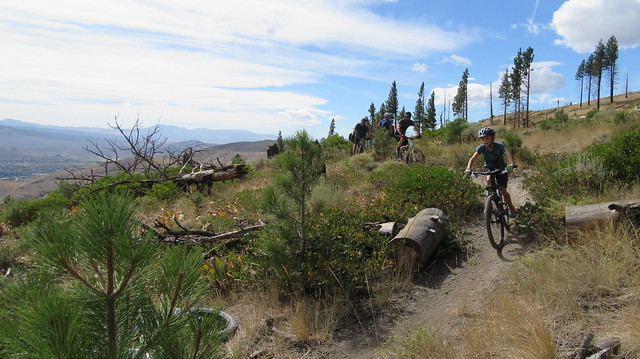 Fun for all ages! 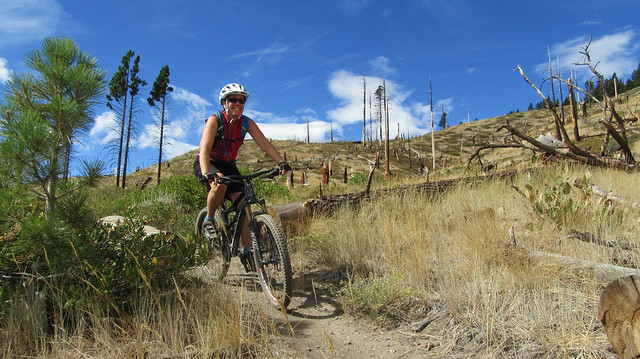 Lots of smiles out on the trail 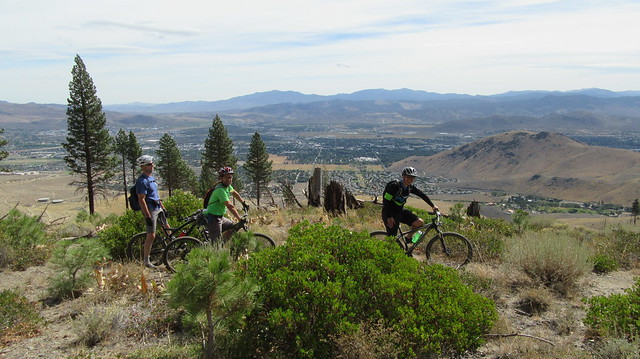 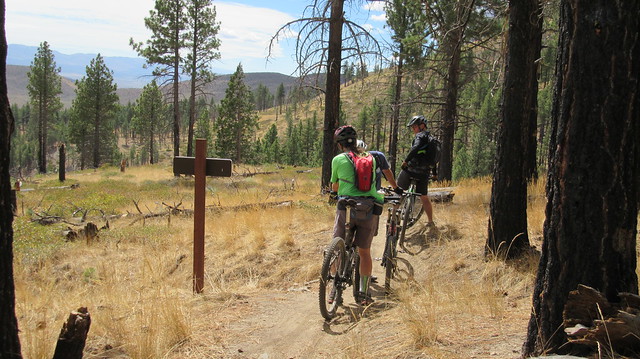 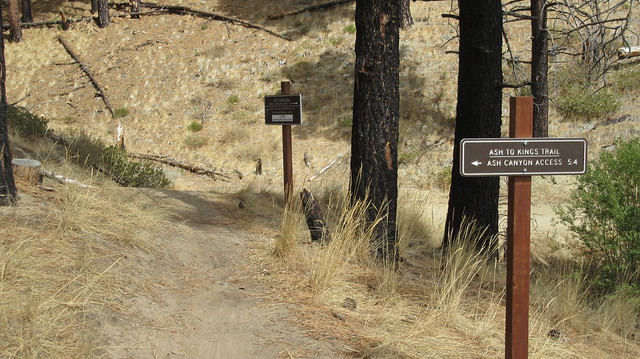 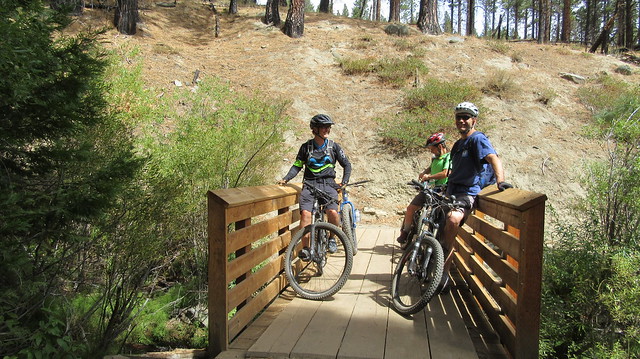 On the Kings Canyon Creek bridge

While the trail is now officially open, that doesn’t mean the work is done. Ongoing trail maintenance must be done. I overheard trail crew leaders discussing sections that already needed to be tended to. Also, there is a plan in the works to construct a new section of trail that will bypass the steep road climb up Waterfall Road. And if you want to look at the big picture, area trail groups are working together, planning to connect our Ash to Kings Trail to the Tahoe Rim Trail and Carson Valley trails for a huge network. It’s definitely a good time to be living in Carson City!

If you’re interested in getting more involved with this trail and other future trail projects in our area, consider joining Muscle Powered, Citizens for a Walkable and Bikeable Carson City.