Recent storms have brought plentiful snow to the Carson Range this season, and this means fun winter recreation close to home. Spooner Summit, just a 20 minute drive from Carson City on HWY 50, provides several options for snowshoeing, sledding, backcountry skiing, and even mountain biking. We got the fat bikes out over the weekend for a quick morning spin on the groomed snowmobile trails around White Hill. 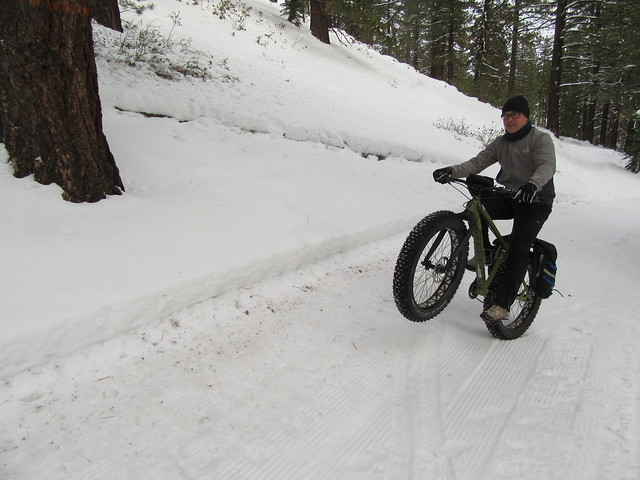 From the Tahoe Rim Trail trailhead on the south side of the HWY where we parked, we followed Forest Road 14N32B to the east. The trail descends along the highway for a little over a half mile before turning a corner and climbing to the southwest. Not only was it a fun downhill, it gave us a feel for how the bikes were going to handle on the snow. Our fat knobby tires were really biting into the groomed trail, the packed snow not feeling too much different than a sandy dirt road. 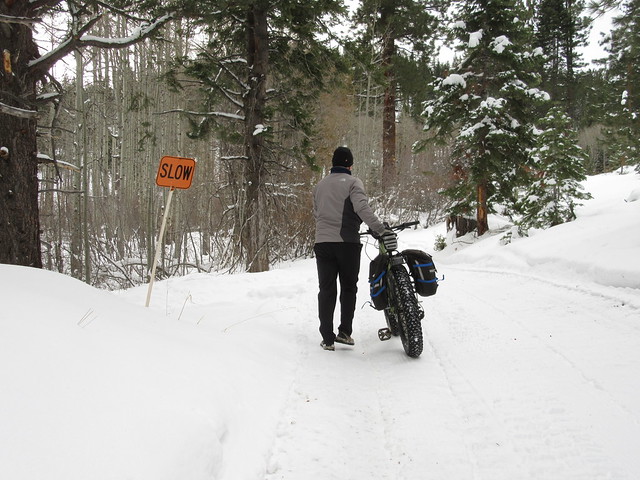 Slow was not a problem at times

Once around the corner, we began our ascent up the mountain. Normally we’d avoid a road this steep in the summer, as it’d be more fun to ride up the gentler grade of the Tahoe Rim Trail. But somehow, getting out in the snowy woods made even the steepest hills fun. Even pushing the bikes up the hill, which we had to do several times, was not a big deal, since much of the road was rideable as long as we had the strength. 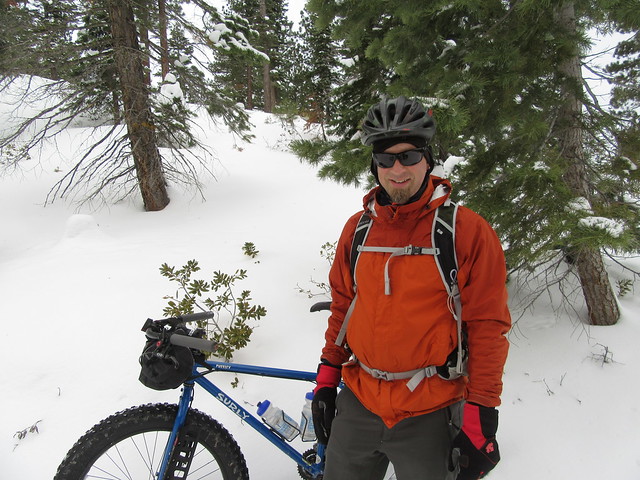 The trail appeared to be recently groomed, and we wondered if they were even running the snowmobiles on this day. We didn’t see another person during the entire climb, and it seemed odd that we had the whole place to ourselves. 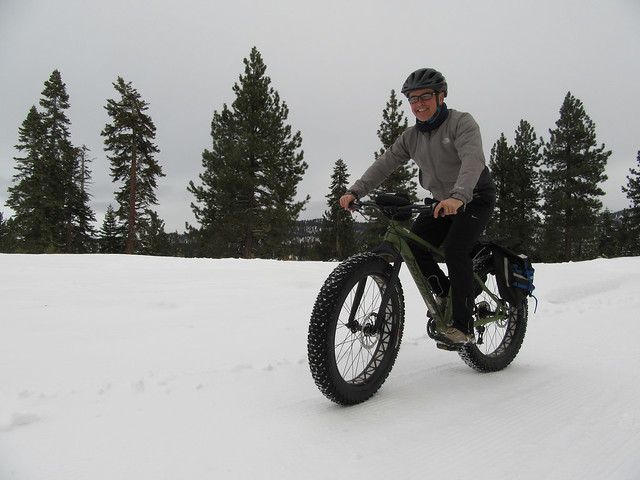 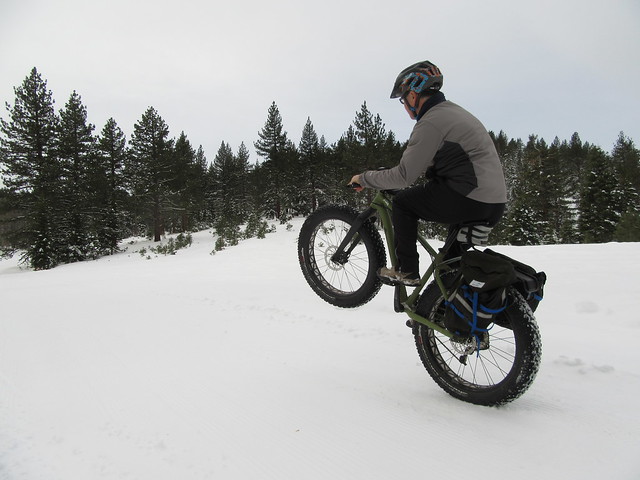 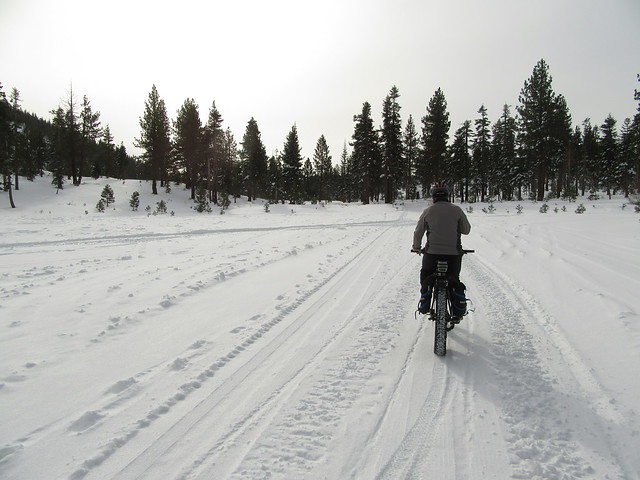 Eventually we got to the top of our climb, near the base of Duane Bliss Peak. We coasted down to the crossroads where we joined Forest Road 14N32. For the sake of a shorter ride, we chose to follow 14N32 to the northwest, a long, steep downhill that ends at HWY 50. 14N32 also continues south uphill towards Genoa Peak, a route I plan to take next time for more exploration and views. 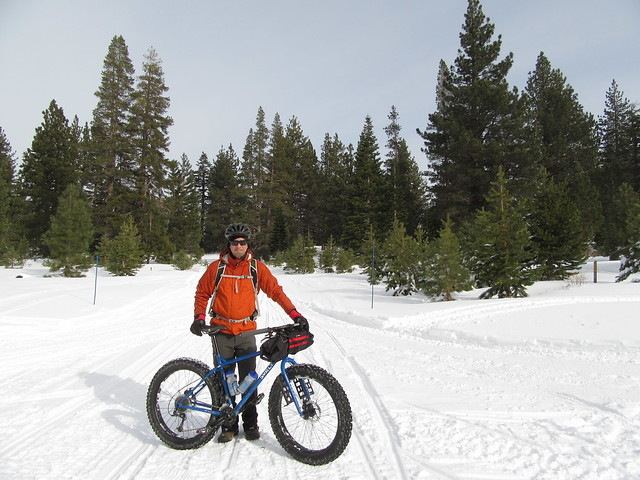 We pedaled over to a view point, but were unable to see Lake Tahoe in the lightly blowing snow. Continuing on, the road got fast and steep, dropping over 700 feet in a thrilling mile and a half. The trail was recently used in this area, and took some looking ahead to pick the best line through the ski ruts. We made the bottom of the run just as dozens of people were about to head out on rented snowmobiles. It looks like getting an early start helped us to avoid any trail conflicts, only passing one snowmobile all morning. Once at the pavement, we followed the shoulder of HWY 50 north about a mile back to the trailhead (be careful of the ice!). 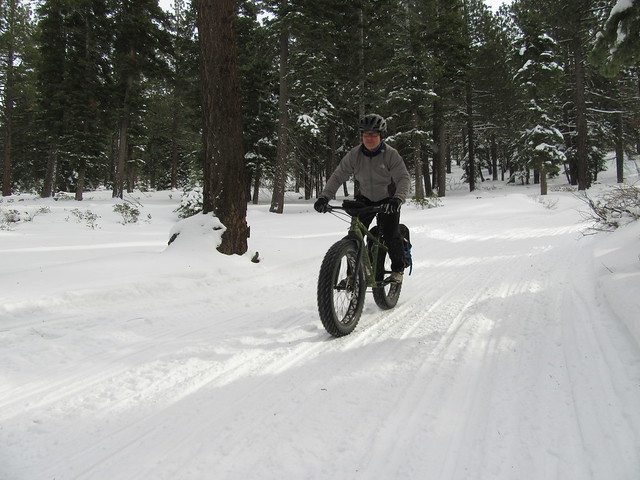 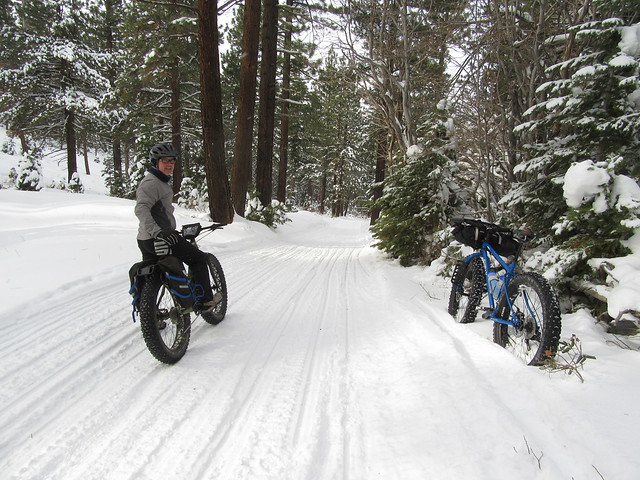 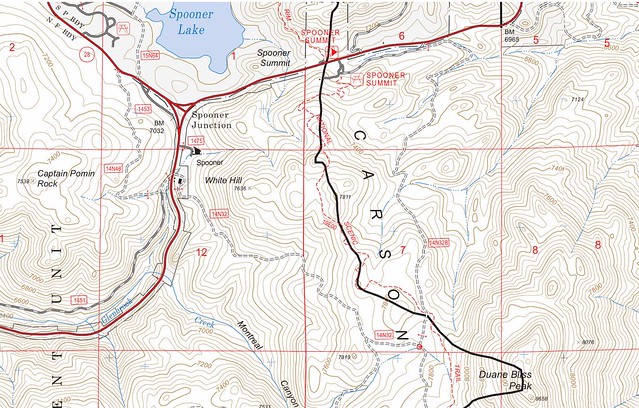 If you decide to go, you will need a fat bike with 4-5″ wide tires. Regular mountain bike tires will not stay on top of the snow. Get out earlier in the day when the snow is still cold for best traction. Avoid warm days, or it will feel like riding in mashed potatoes. Riding this loop clockwise was steep, but counterclockwise would be even steeper. For those looking for a longer ride, it looks like road from the crossroads to Genoa Peak is a bit more forgiving.