Always on the lookout for new places to explore, a few of us got up to Pickett’s Junction on HWY 88 near Hope Valley to ride the groomed snow trails. Hope Valley Outdoors operates a recreational area here, and if you’ve ever driven by, you’ve probably seen the Yurt and parking area. Hope Valley Outdoors maintains the trails around the Yurt, and provides cleared parking. There is no fee to ride the trails, but donations are appreciated and are what keep this place operating. The suggested $10 donation is a great deal for the number of miles of trail these folks groom. 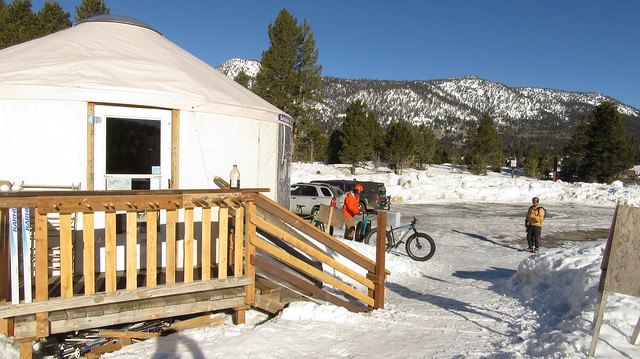 We left Carson City at 8:00 AM, and were on the trail shortly after 9:00. We were the first ones to arrive, and had the whole place to ourselves. We also wanted to get an early start for the best snow conditions. Even with 4-5″ wide fat bike tires, cold firm snow is required for good flotation and traction. The bikes can get hard to pedal and steer, and can even damage the trail for other users when the snow warms up in the afternoon. At 9:00 AM this day, the snow was perfect. 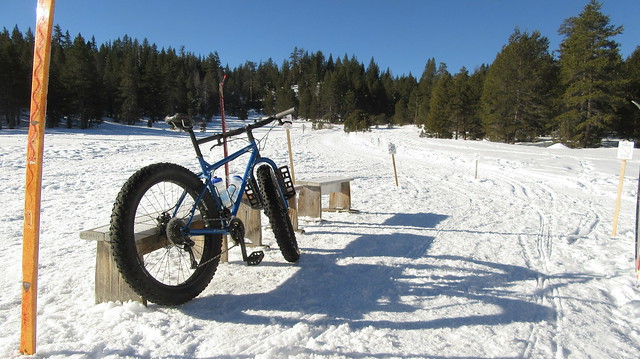 Joyce with Hope Valley Outdoors was opening the place that morning (they officially open for business at 10:00 AM), and gave us some tips for the best trails. We decided to try to get to Burnside Lake, six miles uphill from the Yurt. We were off and cruising easily up the groomed snow track. The trail starts off with a somewhat mellow climb for a good warm up. You may even believe you’re in for an easy ride when the trail flattens out for a bit. 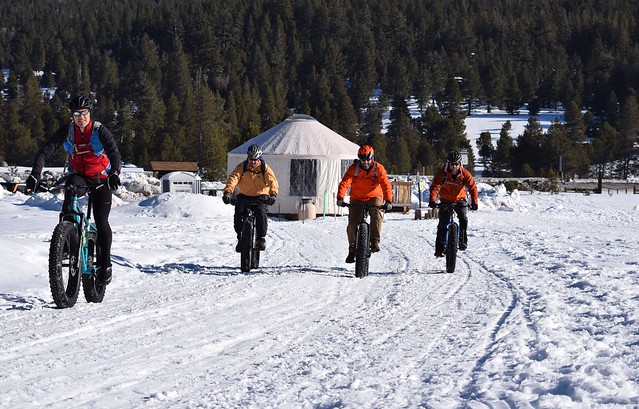 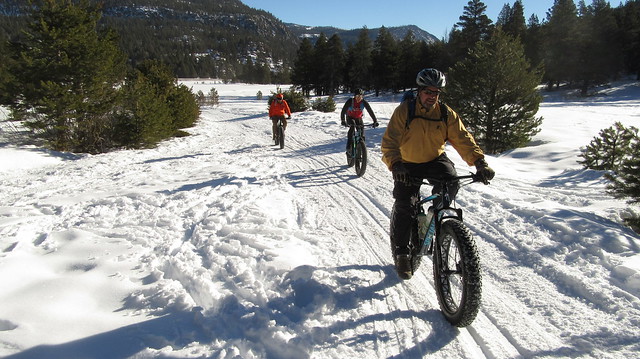 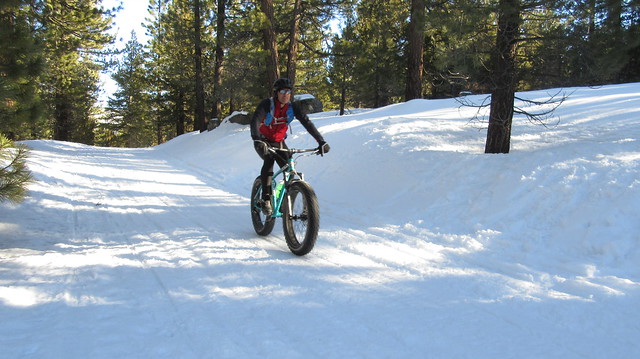 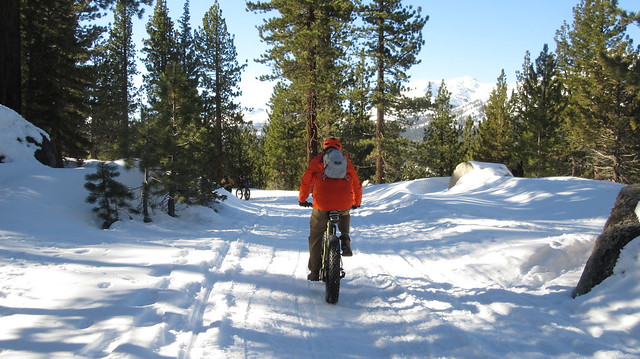 Not far into the ride, the trail begins one of its several steep climbs. Thankfully there are easier sections between the climbs to rest. We took advantage of all of them. After it felt like we had been riding for a while, I imagined that we were probably halfway to the lake. A trail sign informed us that we had only knocked out 2 of the 6 miles, though. My GPS confirmed the 2 miles ridden. We climbed on. 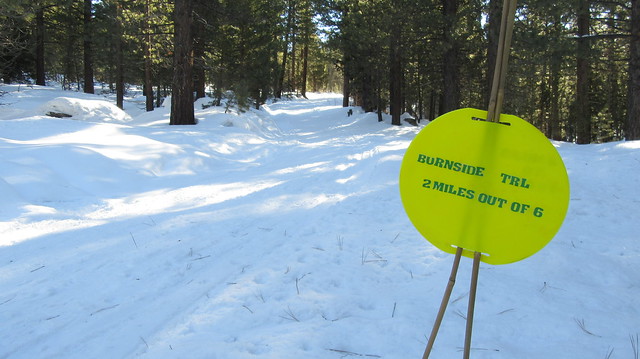 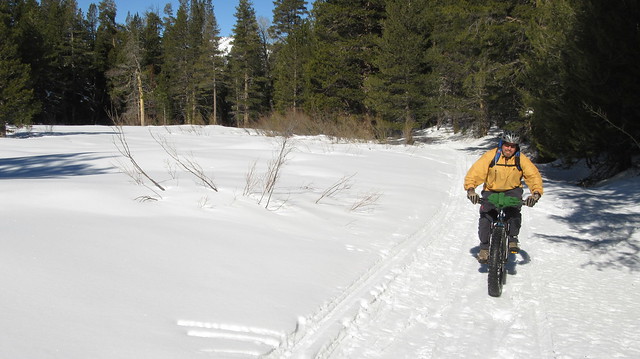 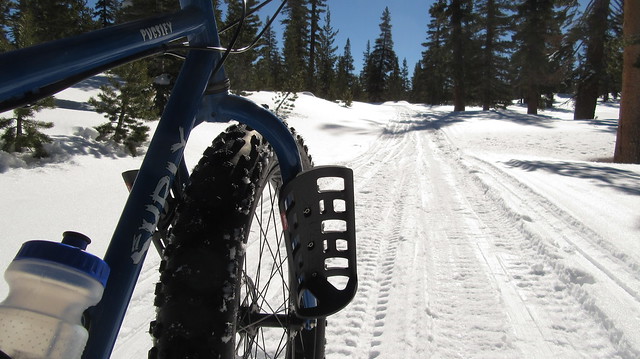 We finally all reached the top of the climb at about 5.5 miles in. The terrain opens up a bit here for some nice views of the nearby mountain peaks. It was not far downhill to the lake, but unfortunately, the groomed trail ended here on this day. Only some unrideable ski and snowshoe tracks led down to the lake basin. On the upside, nothing but downhill back to the trailhead remained! 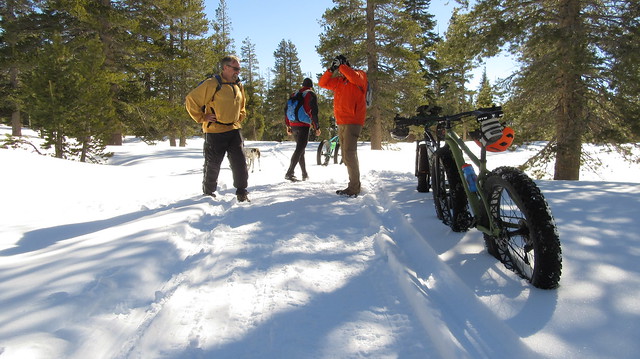 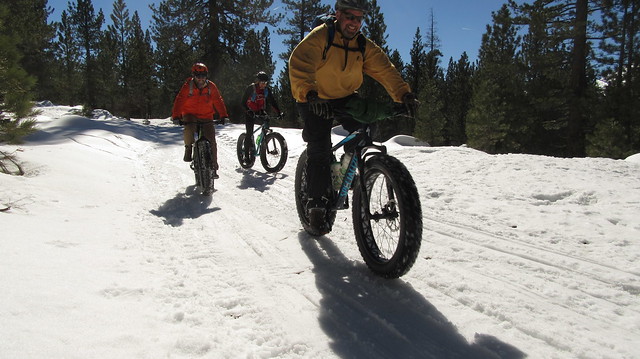 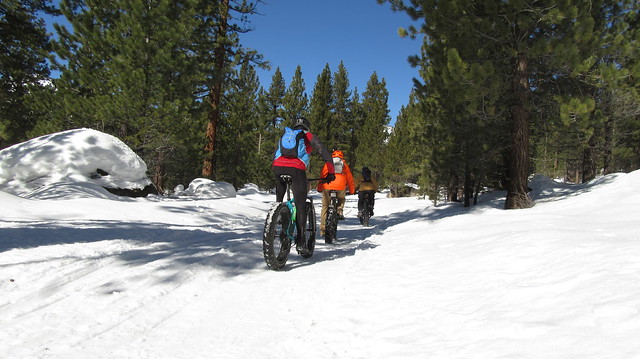 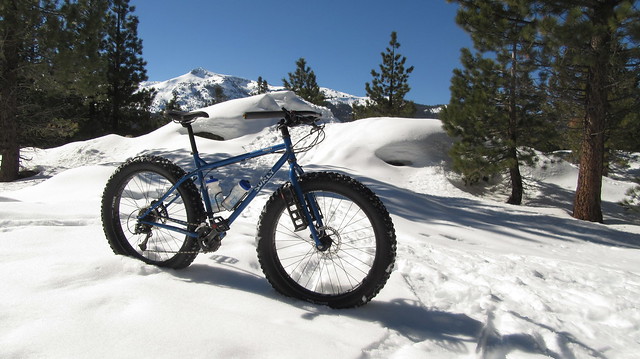 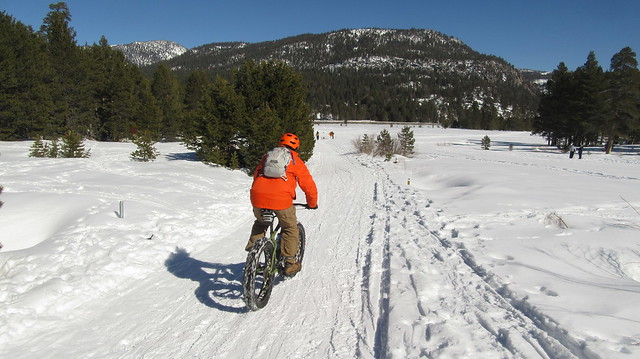 The snow had definitely warmed up some since we started, but still had good traction for some fun downhill. I believe I’m the only one who crashed. I took a turn too wide and stuck my front wheel in the soft snow bordering the trail. Snow is much less forgiving than dirt. We passed a couple skiers coming up the trail on the way down, but surprisingly, it wasn’t until we were near the very end when we encountered the bulk of the people. We returned to a full parking lot when we slowly taxied down to the busy trailhead. 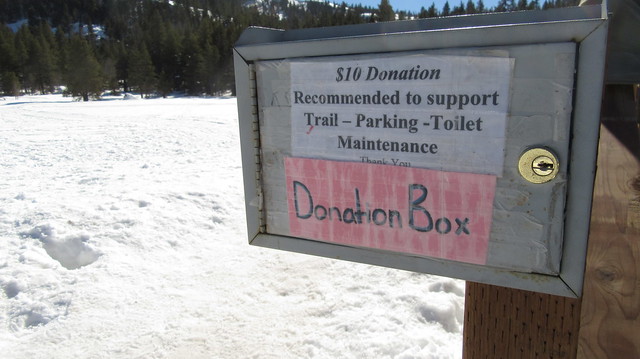 I would return just to ride this trail again, but next time plan to explore the other trails Hope Valley Outdoors has groomed. On the way up we passed turnoffs for Secret Meadows and Hope Valley, and another trail, named Indian Head on the map, that climbs up near Pickett Peak. Hope Valley Outdoors also rents XC Skis and snowshoes, and the website boasts over 60 miles of trail. Also nearby is the Hope Valley SnoPark. I haven’t ridden this area yet, but there may be some good riding on the snowmobile tracks. There is definitely plenty to do and see for a few return trips.