The Meyers Mountain Bike Festival is an annual fundraiser for TAMBA (Tahoe Area Mountain Bike Association) to help support trail building and maintenance in the region that is considered by many to be a mountain bike mecca. Even though 2016 marked the fourth year of the festival, it was the first year I had attended. After seeing what the good folks at TAMBA have put together for this event, I’m kicking myself for not going earlier. The weekend is packed with all types of bike-themed events. 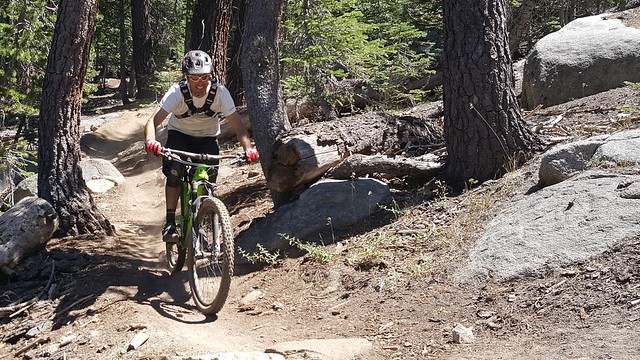 The kick-off for the festival is the Triple-Crown Ride. It’s a 30 mile romp through thick forested mountains that starts at Divided Sky in Meyers and takes you up the Christmas Valley Trail. The ascent has a few rock gardens and technical sections that can translate into hike-a-bike (depending on your skill level). I personally witnessed several riders climb right over the rocks without ever coming unclipped from their pedals; however, I had to push my bike up several of these obstacles.

Once you reach the top of the Christmas Valley trail, you get on to the Tahoe Rim Trail and descend into Big Meadow. The short descent is a fun ride, but be on the lookout for hikers. This is a popular section of the trail as it is not too far from the Big Meadows trailhead just off of Hwy 89.

Once past the trailhead, there’s more climbing before you reach the junction with the Saxon Creek Trail. This particular section of trail borrows its nickname from a famous Disneyland attraction called Mr. Toad’s Wild Ride. If you’ve ever attempted to ride this trail, you’ll see how it earned its nickname. The descent is extremely technical; so much so that I ended up walking a good portion of the decent because it was well beyond my skill level. But it was really fun to watch some of the expert riders on their descents. If Toad’s isn’t quite your cup of tea, there’s an alternate route you can take. At the Saxon Creek Trail junction, you can choose to stay on the TRT and continue on to Armstrong Pass, descend all the way back to Oneidas Rd and eventually Divided Sky. 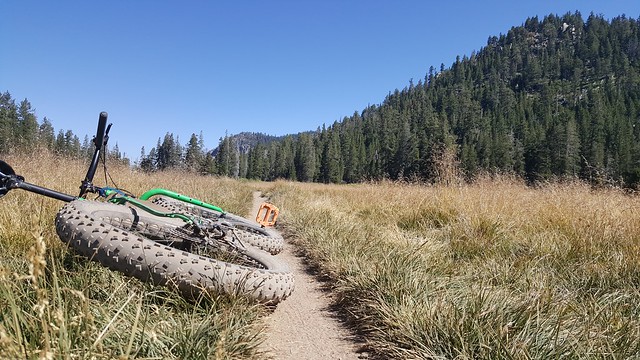 When you arrive at the finish line, you’re greeted with cold beer, local food, and a live band. The atmosphere is really laid back and enjoyable. There were a lot of families there with small children and pets enjoying the festivities as well. With nearby South Lake Tahoe being designated as the “Mountain Biking Capital of California” by Singletracks.com, the mountain biking culture is alive and well in this area. It was great to see the crowds of people at Divided Sky supporting TAMBA and the local biking community.

I can’t personally account for the festivities that took place on Sunday, as Saturday was the only day I attended the event. But according to the website, there were demo rides available from Ibis, Knolly, Turner, Specialized, Norco, Intense, and Giant. So if you ever wondered what it was like to ride one of these bikes, the Meyers Mountain Bike Festival gave you the chance to do it. Besides the demo rides, there were regular shuttles taking riders to the top of the Corral trail starting at 9 am and going through 5 pm. Overall, the Meyers Mountain Bike Festival is one of the premier mountain biking events in the region.

Visit the Meyers Mountain Bike Fest page for more information, including a map of the Triple Crown Ride.