With limited daylight and freezing temperatures, winter can be a challenging time to plan a bike ride. Not only that, the usual trails can often be icy, snowy, or muddy. These conditions have had me searching for new places to ride. A ride that isn’t too strenuous (it’s not a good idea to sweat in the freezing cold), has some nice scenery, and gets me outside for a few hours. A recent search led us out to the Pony Express Territory on the south end of the Lahontan State Recreation Area. 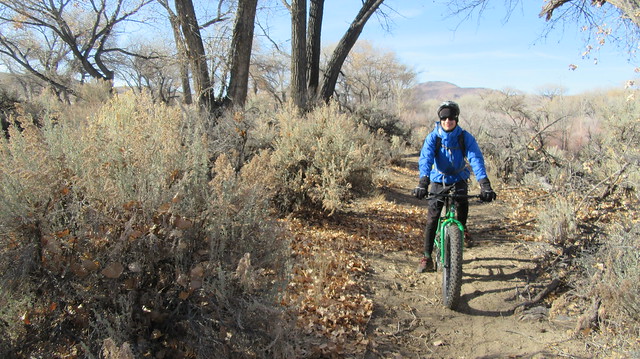 Just south of Buckland’s Station and across the Carson River Bridge is the turnoff to Simpson Road. This dirt road heads off to the east for miles and follows the old Pony Express Route. We parked just a ways off the pavement, and unloaded the bikes. We followed Simpson Road for a couple hundred yards, then turned north towards the river. 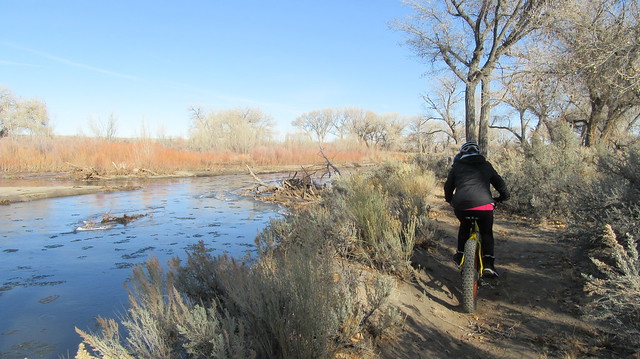 Ice in the Carson River

As we got closer to the river, we followed a singletrack downriver to see how far it went. To our surprise, it kept going, eventually passing through Scout Camp and on down the river. The trail winds its way through the brush and now leafless cottonwoods, occasionally following right along the river. To add to the winter scene, big chunks of ice were floating along in the river’s current. 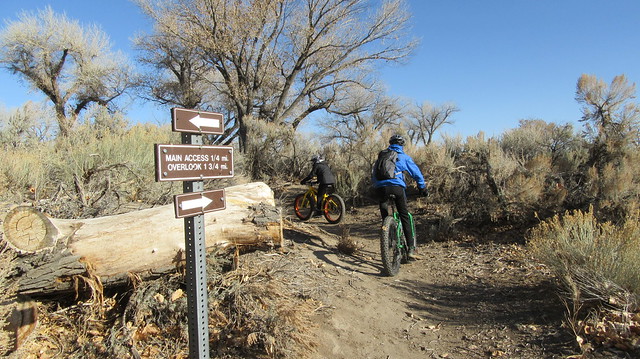 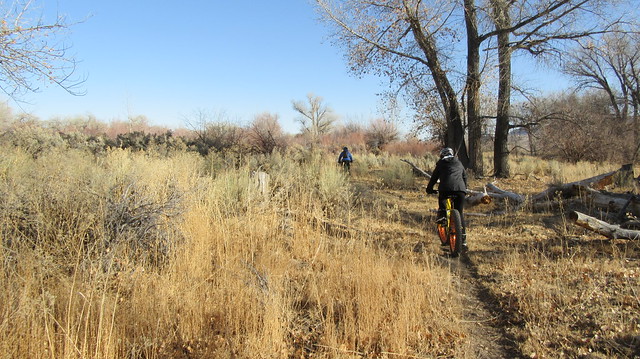 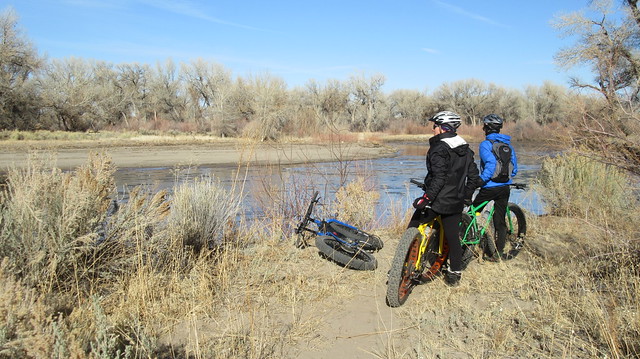 The only problem we had with the trail were the downed Russian Olive branches. If you’re not familiar with this small tree, the branches have one inch thorns on them. If the branches fall on the trail just right, the thorns stick straight up and wait for mountain bike tires. The bark on the Russian Olive branches is redder than anything else out there, so we were able to avoid most of it. Unfortunately, though, we ended up getting one flat on the way out anyway. 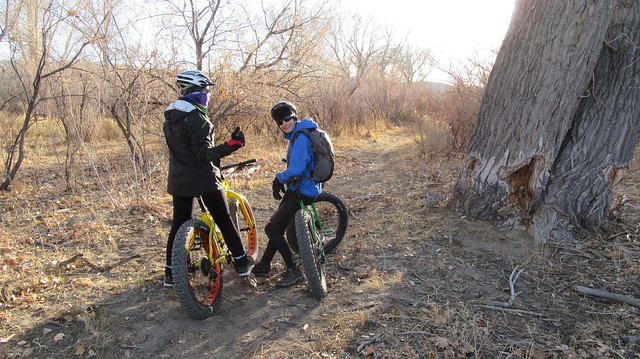 We stopped at a bench with a nice view of the river to fix the flat, and used the downtime for lunch and some hot apple cider. With the sun making its way down, we decided to head back the way we came after repairs were complete. We had made it most of the way back when my son got a flat in his front tire. Fortunately, he was able to ride it most of the way back to the trailhead, so no more trailside repairs were needed. And a good thing too, since the sun was starting to set behind the hills. 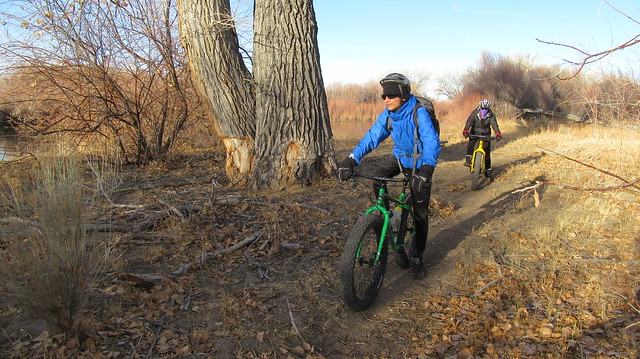 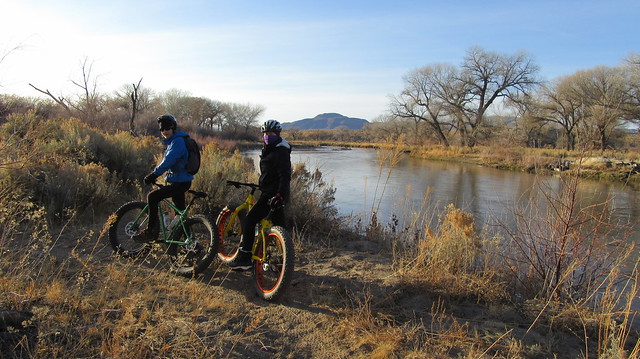 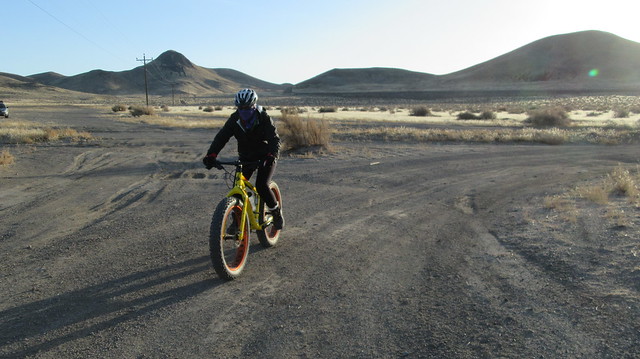 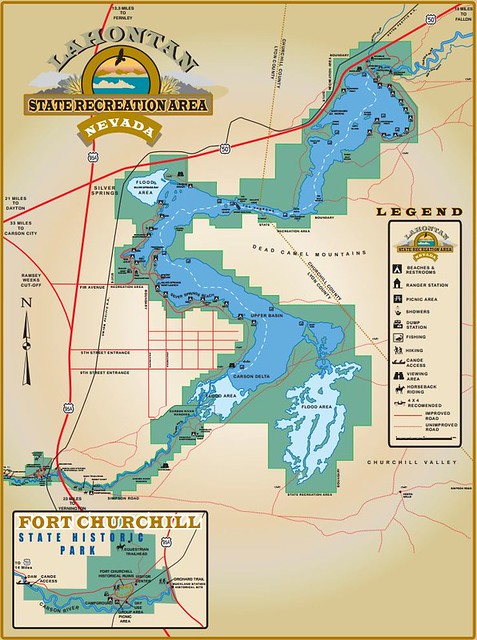 We only explored a small part of this big area. Our trail continued on down the river. Simpson Road continues all the way across the valley and into the mountains, and many side roads take off from Simpson Road. Pony Express ruins can also be found out in the valley. The trails further away from the river should be free of Russian Olive thorns, and this is where I’ll probably go next. Elevation gain/loss is minimal in the valley. It should also be noted that this area can turn to sticky mud when it gets wet, so it’s probably best to visit when it’s dry or frozen. Scout Camp, a fee area near the trailhead, has picnic tables, bathrooms, fire pits, and horse facilities. It looks like it would be a fun place to gather after a group ride. Fort Churchill State Park is also nearby.

One thought on “Riding the Pony Express Territory”