The trails in the valley might be muddy and washed out right now, but there’s still some great riding in the higher elevations if you have a fat bike. We found plenty of fun snow riding up at Lake Tahoe Nevada State Park in the Spooner Backcountry. The trails had been groomed the day before, and there had been some melting over the two days. This left the trail surface pretty choppy from all the foot traffic, snowshoers, and skiers. By the time we started riding though, the snow was beginning to freeze up again, and provided us a firm surface to ride on. Here’s some video from the ride:

It wasn’t all just riding for fun, though. We also made a mission out of it. One of the riders was tasked with removing a big aspen tree that had fallen across the entrance to North Canyon. He sawed it up, and we moved the pieces off the trail. This will allow the groomers and trail users to get up the canyon now. It was also the first time I’ve ridden with someone with a chainsaw mounted to his bike. 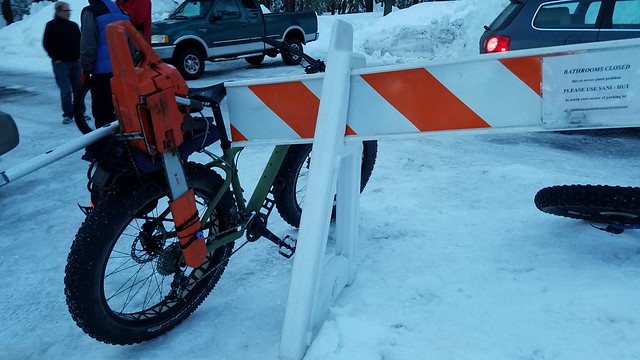 If you go, there is parking at Spooner Lake at the State Park. The entrance fee is $7.00 (and there is even a discount for NV residents). Tires need to be 4-5″ wide to stay on top of the snow, and aired down for maximum flotation. Go early or late when the snow is coldest. If possible (and especially when freshly groomed), keep the bikes over to the side of the groomed trails as not to damage the tracks for the skiers. We found the best riding to be the snowshoe tracks around the lake off the main groomed route.