It was supposed to be a lazy morning watching the winter storm out the bedside window with a cup of coffee. Instead, I was rudely interrupted by a string of brash text messages from someone obviously missing his old Drill Instructor. “Fat Bike ride at the V&T at 09:00!!”, mixed in with a lot of colorful language. I suppose that’s what it took, though, to get us out of the warm bed and out into the cold blowing snow with such short notice.

Here’s some video from the ride:

A winter storm in March has a different vibe than one in December. Earlier in the season, all the neighbors were out with snow shovels waving and pushing snow around in a jolly mood. As I was getting the bikes ready on this morning, though, I didn’t see anyone else out on the street. With storm after storm and flood after flood, it’s possible we’re all growing weary of the white stuff. I certainly didn’t expect this much snow on the ground when I woke up, and it wasn’t showing any signs of slowing down. 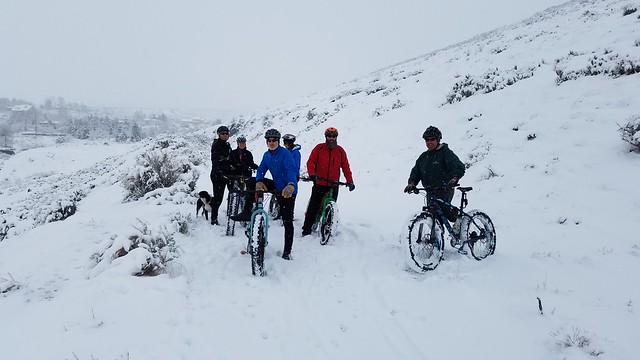 Headed up the V&T Trail

Starting the ride from the house, the family and I made our way up to the V&T Trail, meeting our friends along the way. Three dogs even made the ride! The snow got heavier the further west we rode, and a few inches were piled up on the ground when we left the road. The off-street riding began near the now full detention basin behind the college. Soon we were on the V&T bike path and headed north along the former railroad bed. 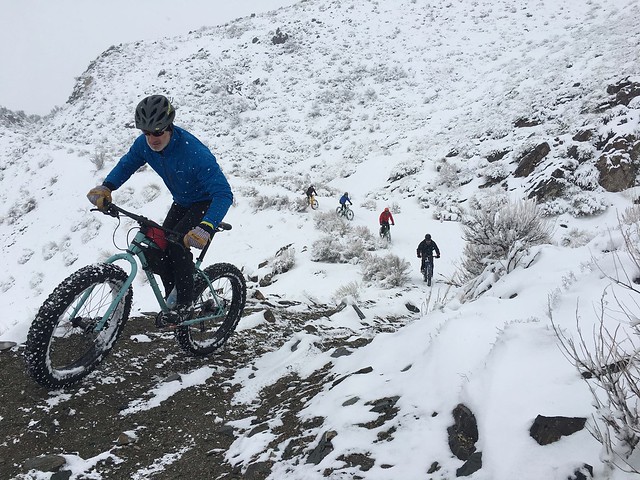 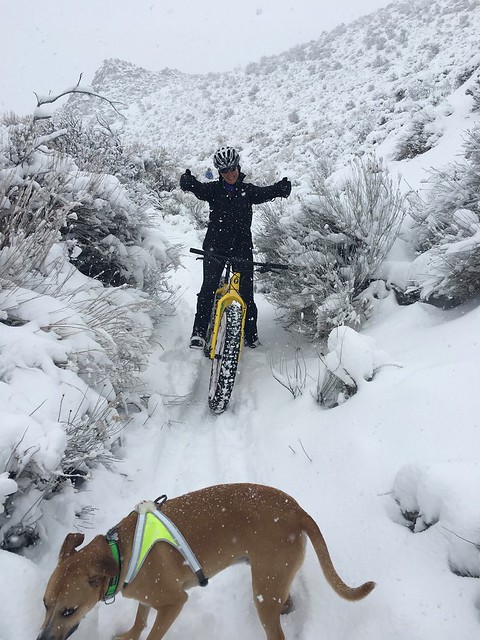 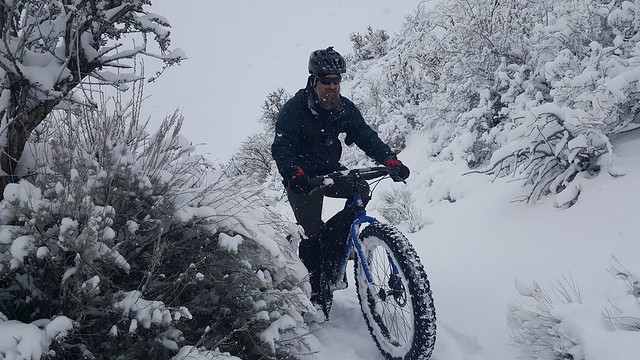 Still snowing and getting deeper 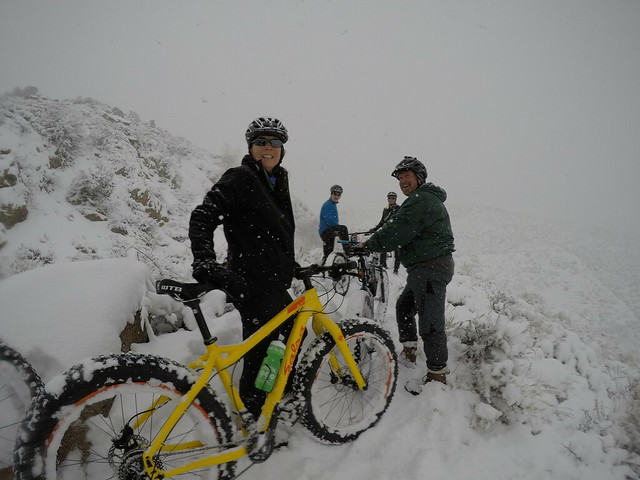 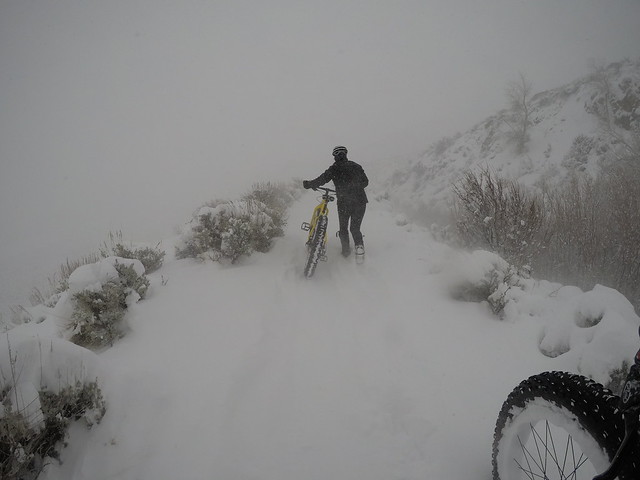 Snow conditions were great for riding with lots of traction. The riders up front had the hardest job, breaking new trail as we climbed. By the time we all rode through, though, we had a nice track laid down for the downhill return! The way back may have been easier, but the wind really started to pick up. There were whiteout conditions at times, the ferocious winds numbing exposed skin in seconds. The horizontally blowing snow also made for a few amusing snow-beards! 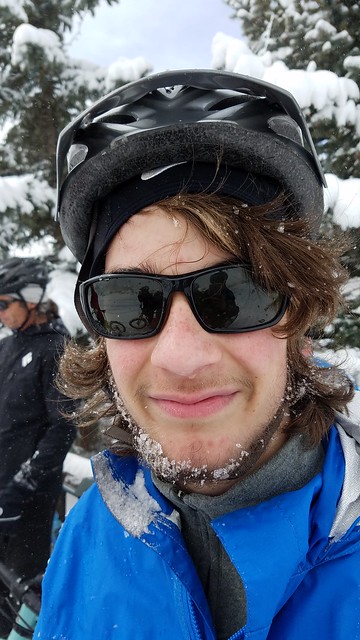 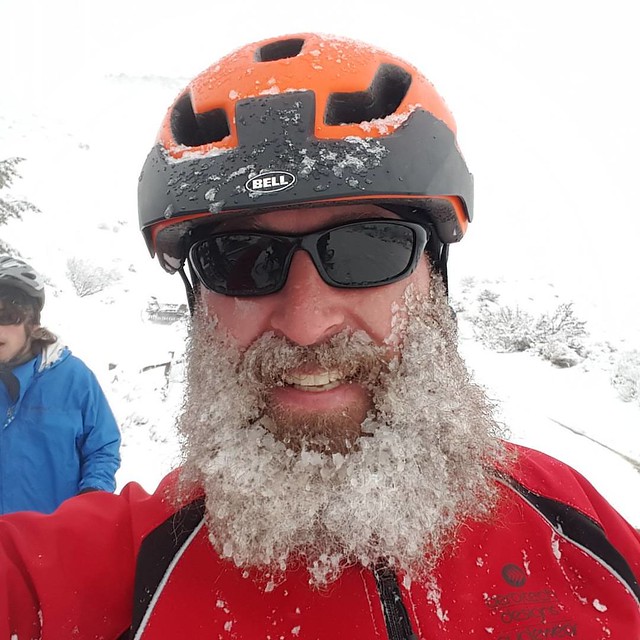 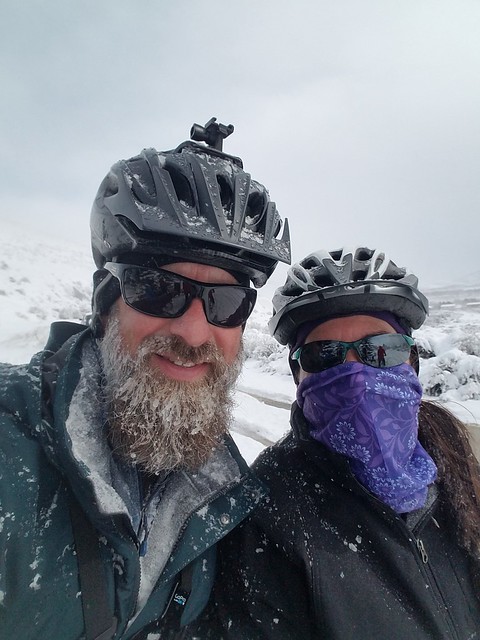 The buff beats the beard when going for water repellency 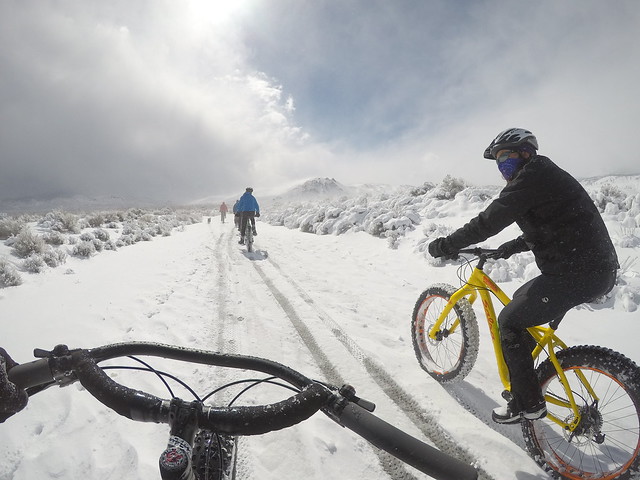 The sun comes out at the end

It wasn’t until we got back down to the bike path that the weather temporarily let up and let the sun poke through for a few minutes. It felt really warm in comparison to just a few minutes before. Riders finally headed off their separate ways, and we returned home to get back to what we had originally planned to do…relax and watch the rest of the storm from indoors!

For the record, Spring is just two weeks away.