Twelve miles south of Fallon, we were nearing the drop off point in Lahontan Valley. Looking out at the flooded playa, it wasn’t looking promising. When we got to Simpson Road, it was pretty much just a cattle guard leading straight down into the water. Luckily, there are multiple routes through the Dead Camel Mountains, and we had a backup plan. 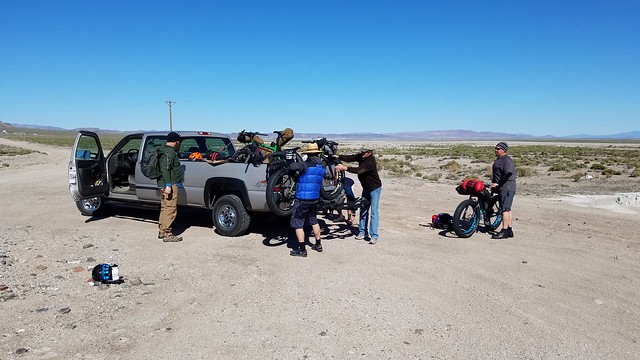 The drop off. Thanks Mr. P!

A couple miles further south, we found dry ground on a higher road that parallels the Desert Mountain Range. This road was a little less direct than our planned route, but appeared to still be a gentle climb through the mountains, topping out in Wild Horse Basin at around 4,700 feet. As our ride pulled away, the five of us had little choice but to start pedaling west for a couple days of adventure. 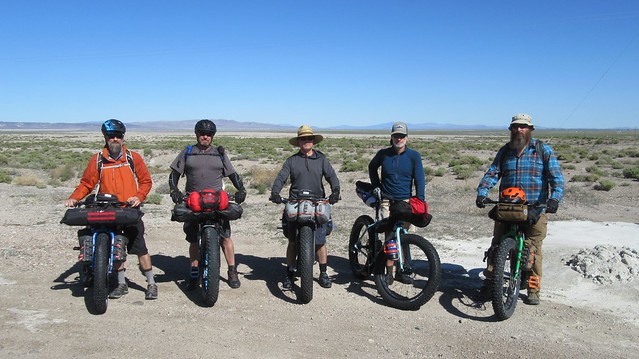 One of the fun things about this ride, is that it closely followed the historic Pony Express route. The Pony Express was a horseback based mail service delivering messages, newspapers, and mail, and operated from April 1860 to October 1861. The route stretched from St. Joseph, Missouri in the east, to Sacramento, California in the west. Through Nevada, it followed the Central Nevada Route to Carson City. During its 19 months of operation, it reduced the time for messages to travel between the Atlantic and Pacific coasts to about 10 days, about half the time it took by the fastest stagecoach competitors. The completion of the telegram line to the west quickly put the Pony Express out of business. 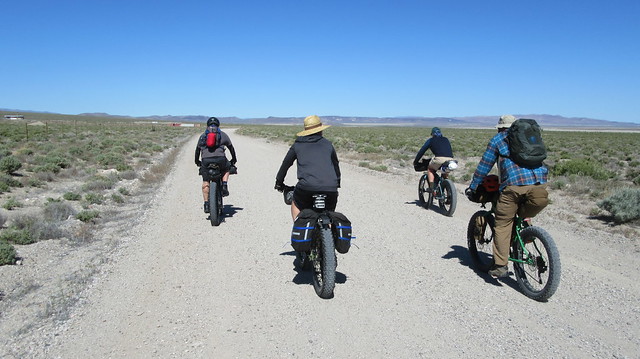 Although we were riders on the Pony Express route, none of us would’ve qualified to be Pony Express Riders in the 1860s. Since speed was the main goal, riders were young wiry men who weighed between 100 and 125 pounds. Their average age was around 20, but it wasn’t unusual for teenagers as young as 14 to be hired. Pony Express riders swore an oath not to use profane language, or drink intoxicating liquors. This is another area where there would’ve been grounds for our dismissal. 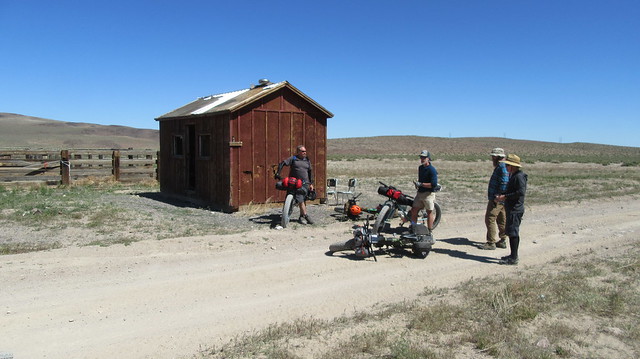 Pony Express riders would switch horses at stations every 10-15 miles along the route, and each rider rode about 75 miles per day. Riders faced extreme weather, harsh terrain, and the threat of attacks by bandits and Indians. Six riders died in the line of duty during the short history of the Pony Express. By contrast, we had 70 miles planned over two days, and were treated to pleasant springtime weather. Any hardships we faced were of our own making. 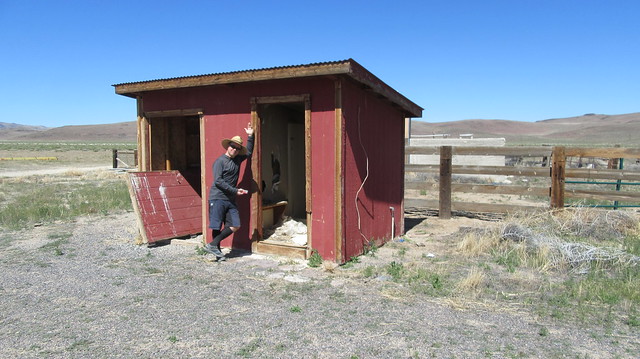 Restroom and shower were out of order 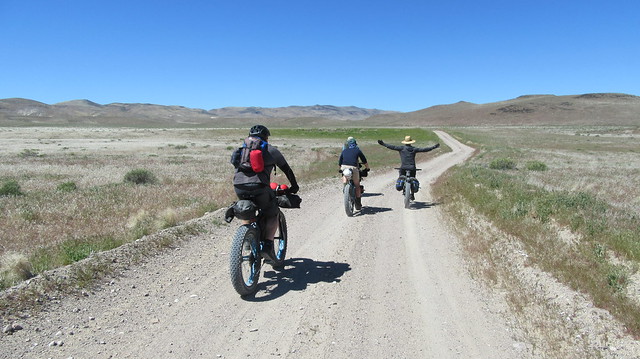 After crossing the Lahontan Valley, we entered the Dead Camel Mountains. While rather unimposing when compared to other area mountain ranges, they do have a peculiar name. One site says that camels entered southern Nevada in the 1850s as part of a U.S. Army experiment. In the 1860s, there are stories of area camel racing and camels being used for hauling supplies to the Virginia City mines. 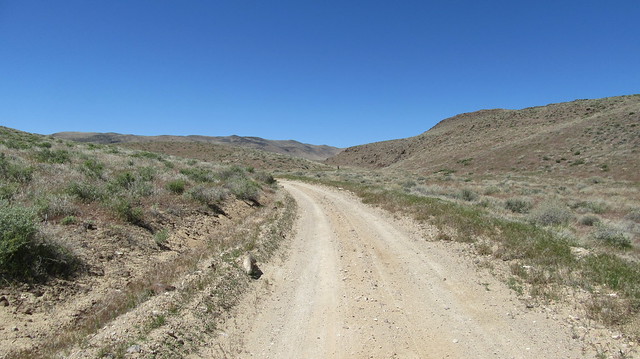 Apparently, the camels had problems with Nevada’s plentiful sharp rocks, and they scared the horses. In 1875, commercial use was abandoned when the Nevada Legislature prohibited camels on public highways to safeguard horse traffic. Some camels were sold, and others were set free to roam Nevada. Another site claims that in 1891, prospectors came across one of these feral animals in the hills that are now named the Dead Camel Mountains. We had no camel sightings on our ride. 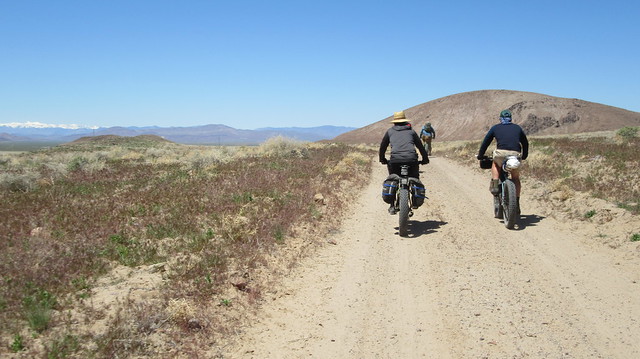 While we didn’t follow the Pony Express Route exactly, we did pass every station along the way. We started our ride near the Carson Sink Station. From there we passed Desert Station/Hooten Well, Buckland’s Station, Fort Churchill, Miller’s Station, Dayton, and Carson City. Even more dangerous than being a Pony Express rider was manning one of the remote stations, as they were easily ambushed. According to History.com, Indians reportedly attacked or burned several stations during the Pyramid Lake War in the summer of 1860, killing as many as 16 stock hands. 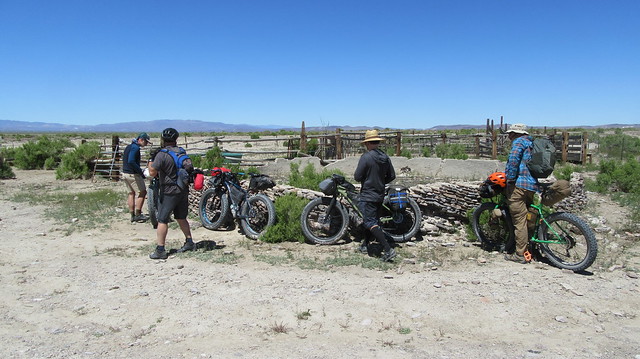 After exiting the Dead Camel Mountains, we arrived at Hooten Well. There are remains of an old well and water troughs here. A modern day well head keeps today’s water below the ground, but we did see some new plastic water troughs filled up for cattle. I brought a water filter, but I wasn’t thirsty enough to take any water from Hooten. This is important to note when planning bikepacking routes in Nevada. Just because you see “well” on the map, doesn’t mean you’ll find something you’ll want to drink. 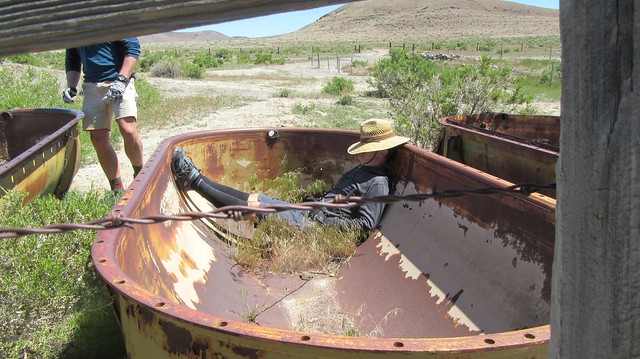 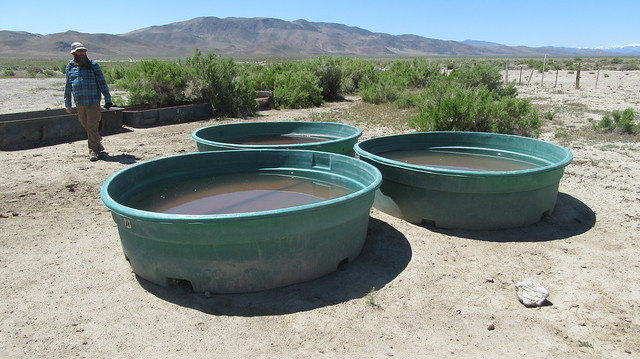 The only water at Hooten Well

Just a short ride from Hooten Well we arrived at Desert Station. This was my favorite stop along the route. There are stone remains from a couple buildings, and you really got a sense of how remote these stations were. Even on this day, there wasn’t much evidence of recent visitation. A fenced gate led away from the ruins, and we followed an unmaintained, but very smooth path leading off to the west. 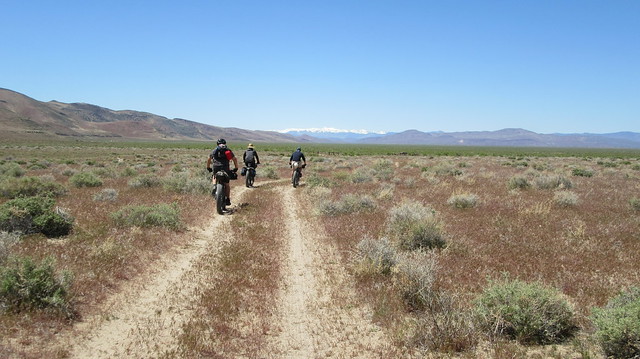 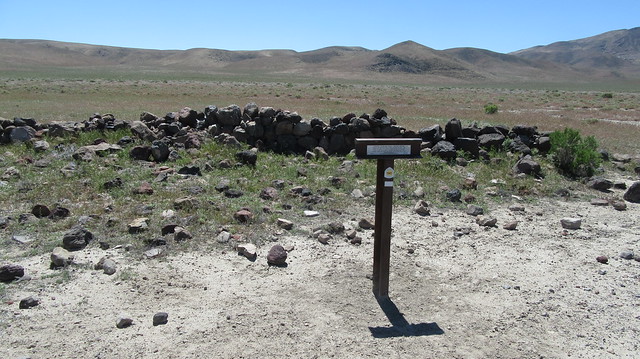 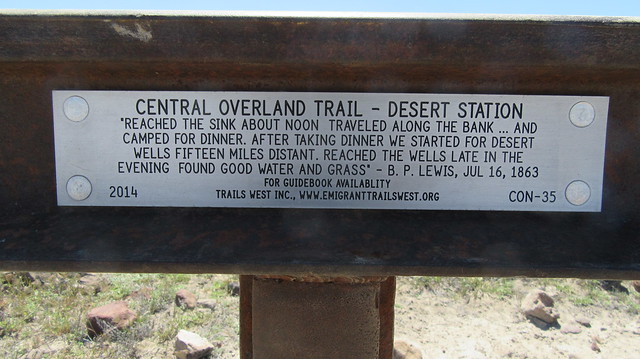 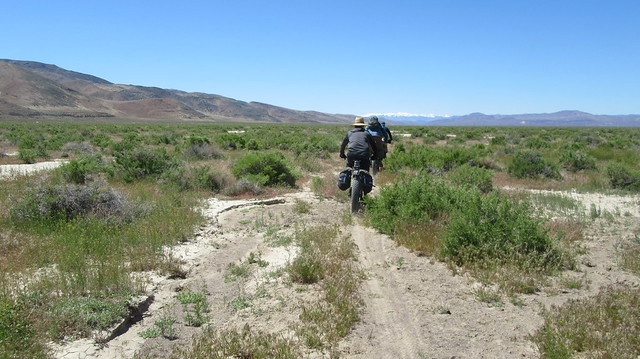 Continuing on the Pony Express Route

After leaving Desert Station, we eventually rejoined Simpson Road. The name Simpson is also a historic one. Simpson Road and the Pony Express route follow the Central Overland Route, aka “Simpson’s Route”, named after James H. Simpson. Although initially scouted in 1855 by Howard Egan, Simpson later refined the route as part of a U.S. Army expedition in 1858. Simpson’s Route was about 280 miles shorter than the standard California Trail route along the Humboldt River. On this day, the road was in good shape, but the hard playa bordering the road was even better. Some of the smoothest surface I’ve ever ridden! We made good time crossing the valley to Buckland’s Station on the Carson River. 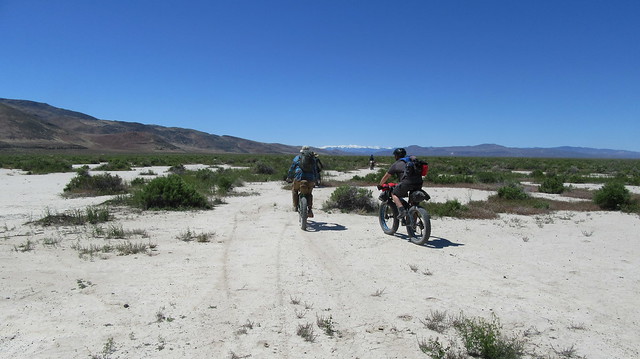 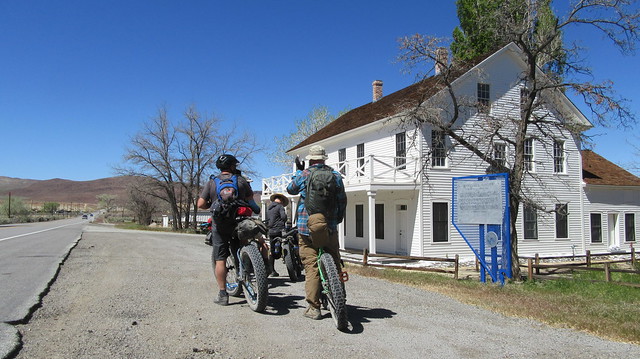 Just south of Silver Springs is Buckland’s Station, an old two story house built in 1870 by Samuel Buckland from the dismantled materials from Fort Churchill. Before the house that stands there today, it was one of the Pony Express stations. Today it’s a quiet old building under the cottonwoods along the Carson River. This is where we crossed to the north side of the Carson River, and was one of the scarier parts of the ride. The shoulder is narrow as it crosses the bridge, and the big trucks and RVs come flying through here at 70 mph. It was great to get off the highway, and get back on the dirt again! 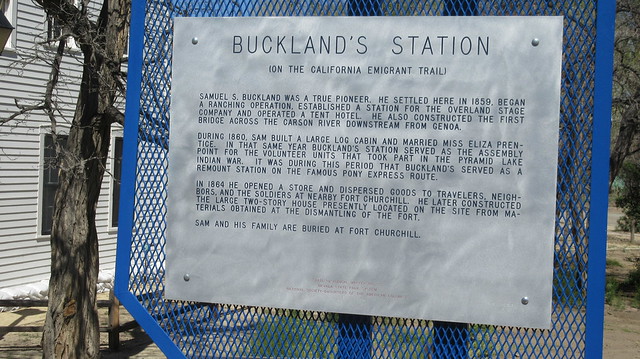 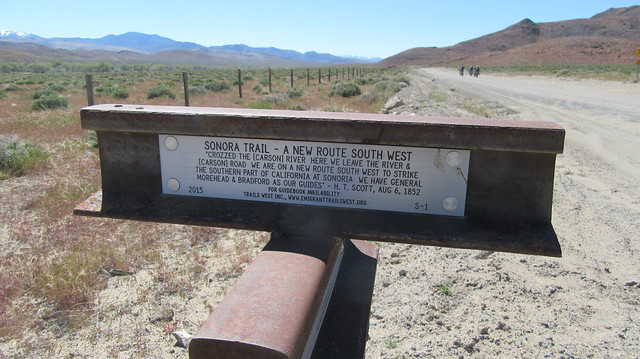 We had planned to stay the night somewhere in Fort Churchill State Park, but as we discovered nearing the Carson River, the gnats were out in full force. They didn’t seem to be biting, but they sure didn’t mind climbing into your ears or up behind your sunglasses. There were way too many gnats to enjoy a restful evening in camp, so in spite of protesting legs, we pedaled on after refilling our water bottles. (Note: if you’re interested in Fort Churchill, check out this post on my other site here.) 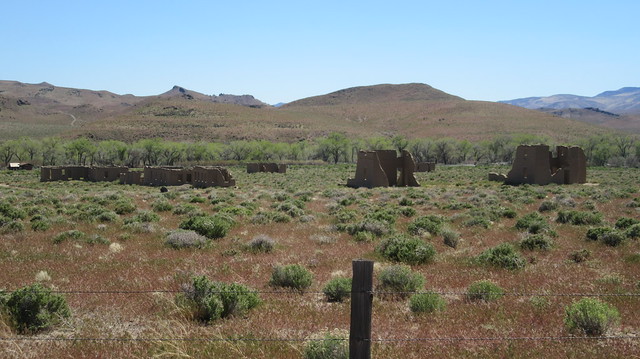 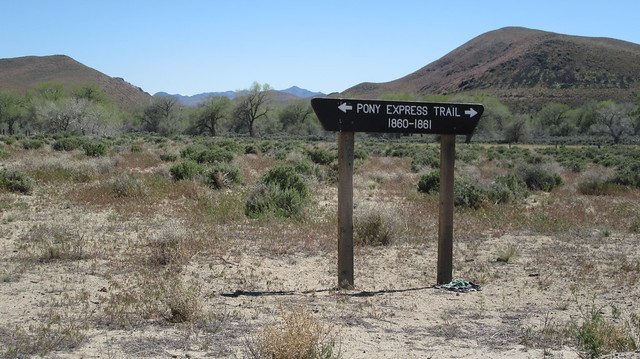 Although very scenic, Fort Churchill Road along the river is really washboarded. Having already pedaled at least 40 miles, our bodies weren’t dealing really well with the constant hammering on our fully loaded bikes. Our thoughts began to focus on dinner, the sort-of-cool beer we had stuffed into our packs, and a place to roll out our sleeping bags. We needed to rest up for another day of pedaling. 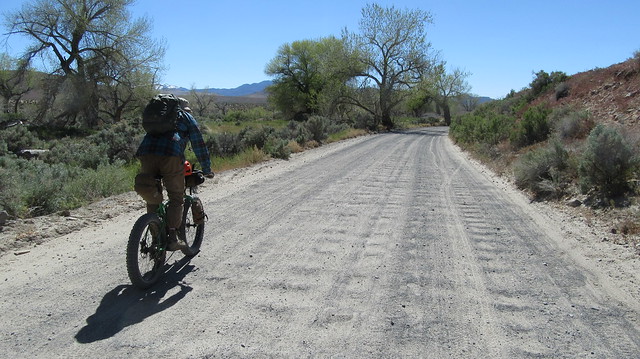 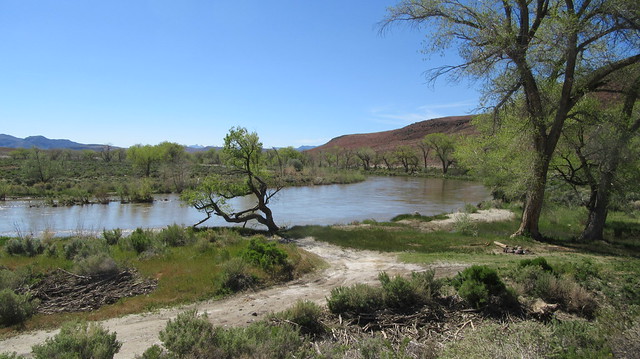 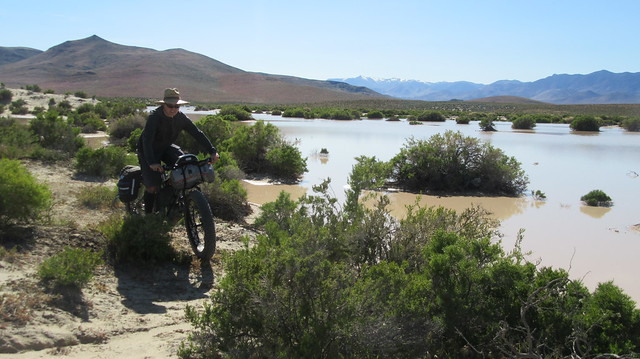 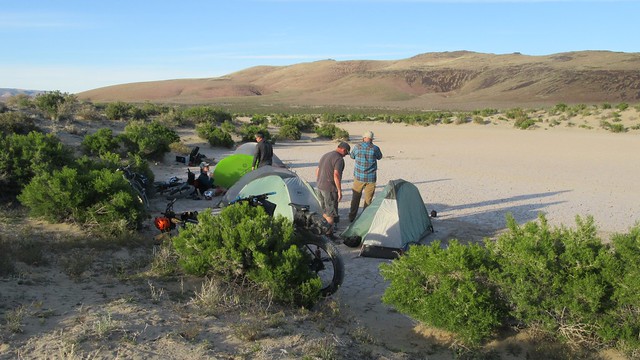 It was fun to ride through this country and imagine what riders and station workers saw and experienced in the 19th Century. With exception of the graded gravel roads, it probably doesn’t look much different than it did back in 1860. It’s wide open country like this that makes exploring Nevada so great! 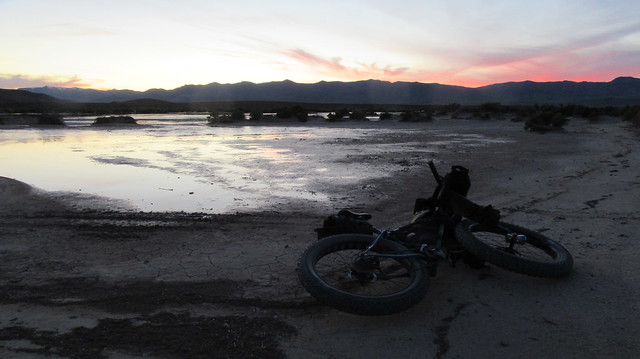 End of a good day

Here’s some video from day one. The soundtrack is courtesy of Carson City’s Hick’ry Switch, songs from their first album: Pony Express and Mindin’ the Still. 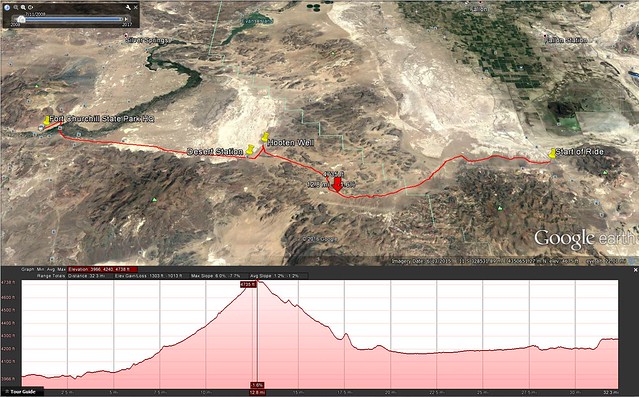 Continue reading about our trip on Day 2 of our ride here.