A continuation of Bikepacking Fallon to Carson City on the Pony Express Route – Day 1.

On the second day of our ride, we veered off our planned route along the Carson River to escape the bumpy washboarded Fort Churchill Road. We headed north on “Break-a-Heart Road”, which is also shown on the map as the California Emigrant Trail / Central Overland Trail. Unfortunately this road wasn’t much better, so we tried our luck crossing Misfits Flats instead. 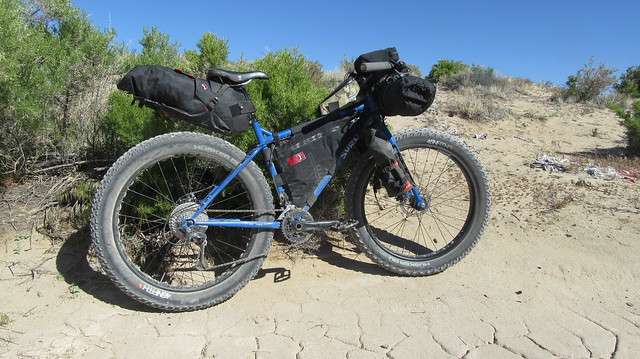 These flats were a location for the filming of The Misfits with Clark Gable and Marilyn Monroe. The story took place in the Western Nevada desert in the 1960s, and there were horse scenes in the movie that were filmed at these flats. We were treated to a scene of our own, with a herd of wild horses running across the playa. What a sight to see! 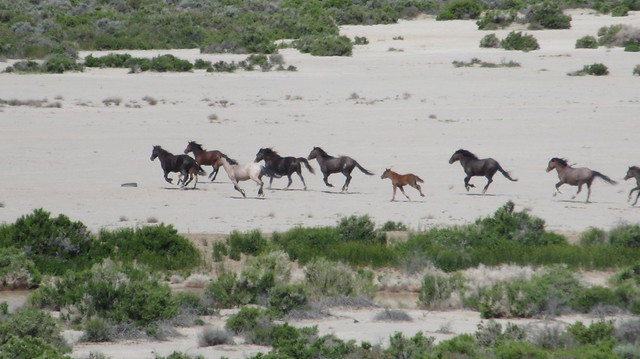 Finding a route across the flats proved to be more difficult than anticipated, because of all the standing water from our wet winter. Not only were there small lakes, but roads leading through the flats had become canals. We attempted to avoid the water at first, but then found ourselves heading too far east, the opposite direction we were trying to go. 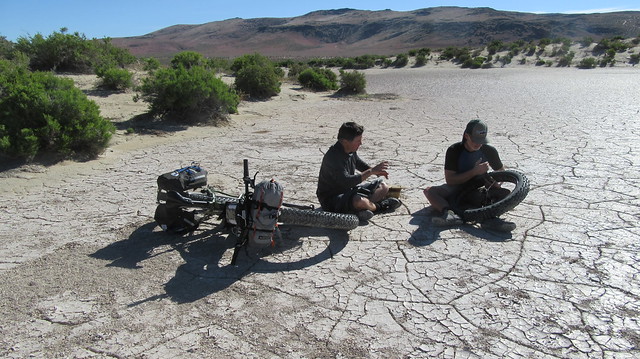 Finally, one rider crossed the mud, then the others followed. This is when the comedy began. While the dry playa was a great riding surface, the wet playa mud was like grease. There were a few successful crossings at first, but then one rider’s bike turned into an exercise bike. He was pedaling fast with the back wheel spinning, but the bike was not moving. Clean shoes went down into the mud. I followed another rider through a longer crossing. His back end slid out hard, but he caught himself. Laughter from the other side of the crossing ensued. Before I could laugh with them, both my tires went out from under me, and I found myself in down in the mud, both shoes and one glove soaked. It happened so fast. 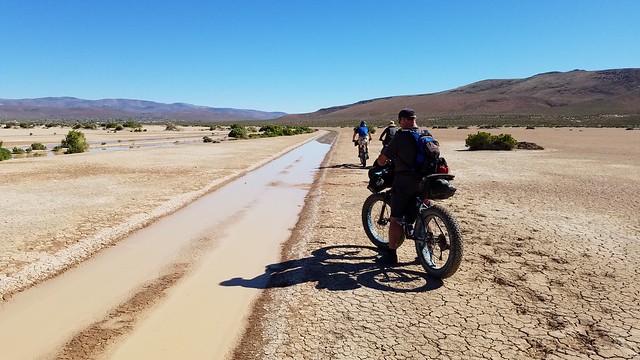 Roadbed doubling as a canal

By this time, everyone had wet shoes to some degree, so we toughed it out and marched the bikes across a pond that would gain us some westward travel. We’d been out there for quite a while now, but really hadn’t gained any mileage towards home. But while it was the most inefficient part of the ride, it was definitely the most fun. Finally, we got back on the bumpy road and headed northwest into Stagecoach. 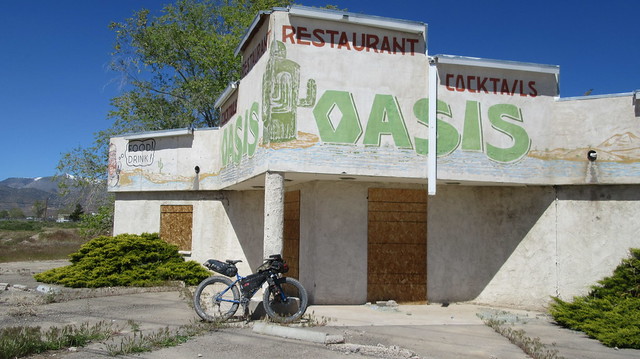 My biggest concern about leaving the quiet Carson River and heading for HWY 50 was the possibility of having to ride the highway shoulder for miles. Luckily, we had a mix of frontage, dirt, and service roads almost all the way to Mound House! They were far enough off the road for pleasant riding. 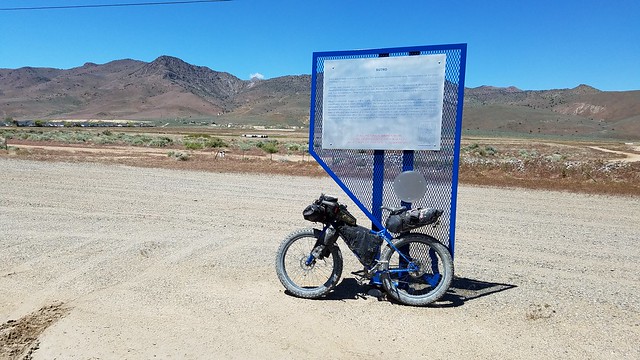 We last refilled water at Fort Churchill the day before, and we were now almost out of water or completely empty. One rider said we were almost to the Maverick Gas Station-Mini Market…just over the next hill. I kept pedaling for what felt like miles and miles, with still no relief in sight.  Finally, I caught up to the rest of the group at the station where they had secured a picnic table in the shade. We bought a few gallons of water, quarts of Gatorade, bags of chips, hot dogs, and even a few beers. This would be the fuel we’d need to make it back to Carson City. I felt a lot better after getting some fluids back in me. I was still tired, but feeling less like a piece of dried jerky. I was a little bummed the rest of the group wanted to leave so soon. 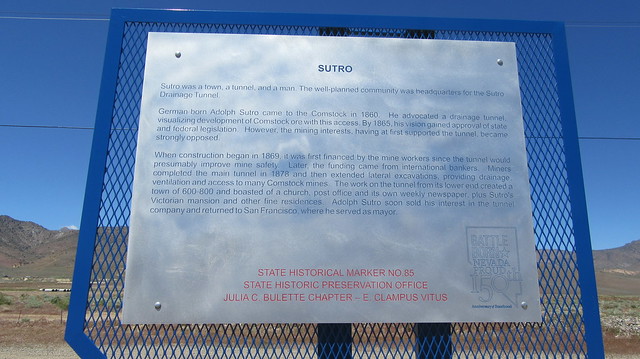 One thing I enjoyed about taking HWY 50 at a slower pace, was having the opportunity to read some of the historical markers. One very interesting site we passed is Sutro, a vanished town contemporary to the decade of the Pony Express. This small town was once a busy place when they were building the Sutro Tunnel. Although the old tunnel site is not open to the public, it’s pretty fascinating to read about. They started digging the Sutro Tunnel at this site, and ended in the Virginia City mines over 3 miles away. The idea was to drain and improve the ventilation to the Comstock Mines. Although a decline of the mines and other changes in Virginia City affected the success of the project, the Sutro Tunnel pioneered the excavation of large drainage and access tunnels in the United States. To this day, the tunnel continues to function as a passive drain, leaving the historic upper levels of the Comstock mines dry. 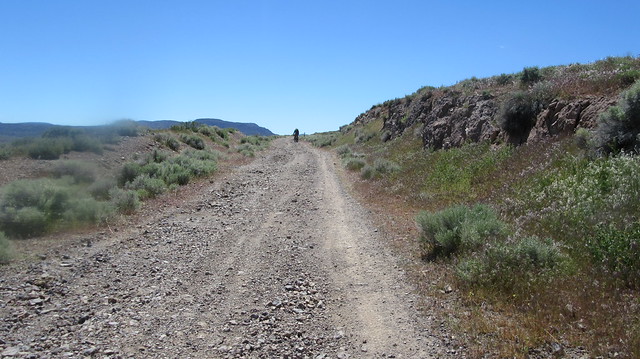 Before reaching Dayton, we found a nice backroad leading into the quiet old downtown area. We stopped at Js’ Old Town Bistro for a good rest in the shade before tackling the next segment. Had the restaurant been open at this time, I would’ve stayed for a huge dinner. From here, we had to get up the steep road to the Dayton Cemetery to access the power line road that would get us to Mound House. 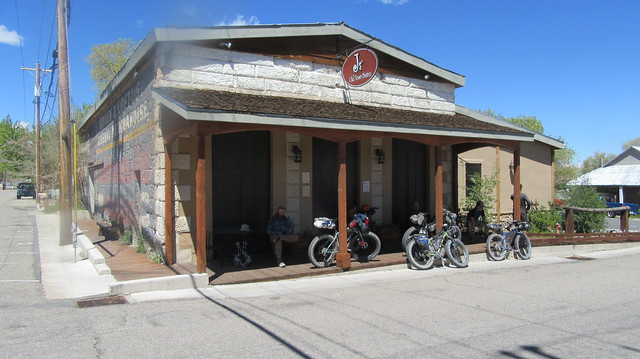 Resting up at Js’ Old Town Bistro before the big climb

Getting fatigued now, I was dreading this climb. I limped to the top of the pavement, though, glad to finally have the hill behind me. Just as I got there, one rider started bombing back down the hill, exclaiming that he left his backpack back down at the Bistro. Ugh! We watched him fly down the hill, then into a sharp corner hidden in the trees. Strangely, he didn’t emerge immediately from the other side of the corner as he should have. As we grew concerned, he finally appeared, but much slower and slightly hunched over the bike. He didn’t immediately return up the hill with his pack either. 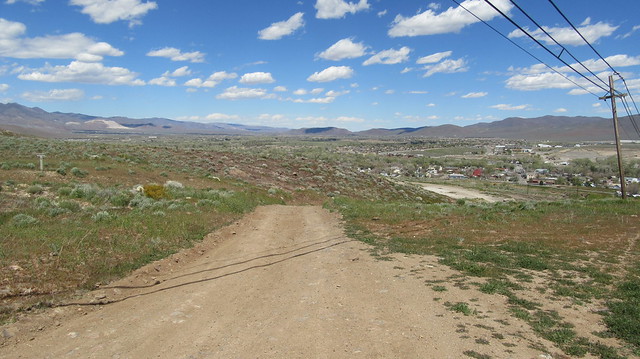 Looking back across the valley

Two other riders had already gone ahead at this point. I texted the rider at the bottom to see what was up. The reply message indicated that he was “bleeding from his head a little”, and that he broke the front brake lever. The remaining rider and I immediately descended back down the mountain to see what the damage was and to render first aid. He met us and the bottom of the hill, and explained that he didn’t make the sharp corner with all the extra weight of the bikepacking gear on the bike. He had a lot of road rash and a couple bumps, but nothing was actively bleeding. He seemed coherent enough, so we agreed to let him press on. I think I may have been done at this point had it been me. Once again, we tackled the climb up to the cemetery, and then pushed our bikes up to the power line road. 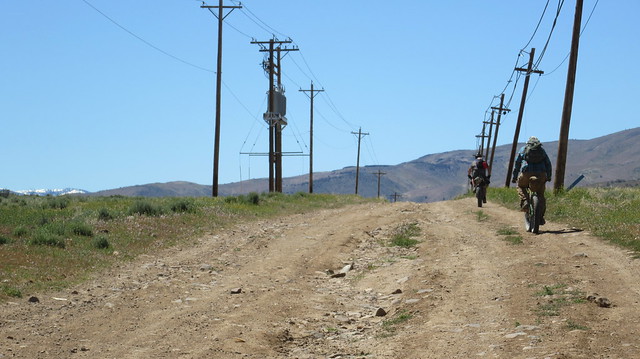 We could now see Mound House and had a good view of the snowy Carson Range. Home wasn’t far off now! This was a very scenic part of the ride, complete with wild horses. We finally joined the asphalt near the cutoff to Virginia City, SR 341. By now, the slight climb through Mound House and constant headwind were wearing me down to nothing. My whole body hurt, not used to sitting in the saddle for this many hours. The nearby traffic was loud and looked like the Autobahn compared to my snail’s pace. I was so relieved to get to the Welcome to Carson City sign. 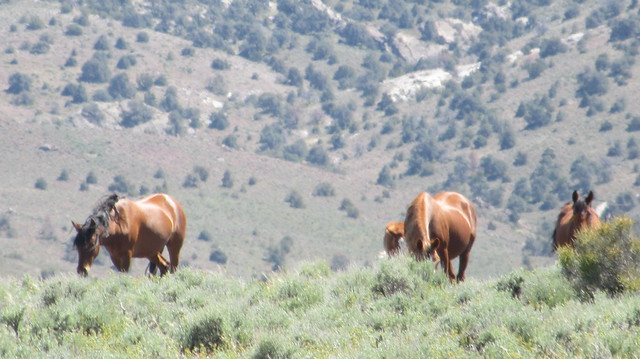 The descent into Carson City was welcome but short lived, and now there was the task of getting across Eagle Valley to downtown. I don’t think I’ve ever been more aware than at this moment of how much of a hill it is to get back to town. I normally zip all around the city on my bike, but now I had to rest every few blocks. I eventually parted ways with my fellow riders as they turned off to go home. I finally pulled into my west side driveway totally spent, but triumphant. For not having done any big rides this year prior, I was proud to have done over 70 miles with all the bikepacking gear. I had a blast doing it, and got to see some beautiful country along the way. Definitely an unforgettable ride. It was now time for feasting and sharing the stories of our adventure!

Here’s some video from the second day of the ride. I titled it Escape from the Playa, and it begins with our wanderings through the wet flats, trying to find a way out. Luckily I had the camera going for my wipeout! I’m glad I kept getting video all the way home, because it appears I stopped taking photos the more tired I got.

Music courtesy of Carson City’s Hick’ry Switch, Back Across the Valley from their new CD Old Mine Road.