The Carson City Off-Road event was held June 16th – 18th, three days of racing, riding, music, and other fun activities. This race is the 3rd and final in the Off-Road series that Epic Rides puts on. Last year was the first time the event was held in Carson City, with around 600 people participating.  This year the entry limit was raised to 900 riders! People traveled from all over to attend this weekend of mountain biking, many arriving early in the week to start familiarizing themselves with the city and trails. 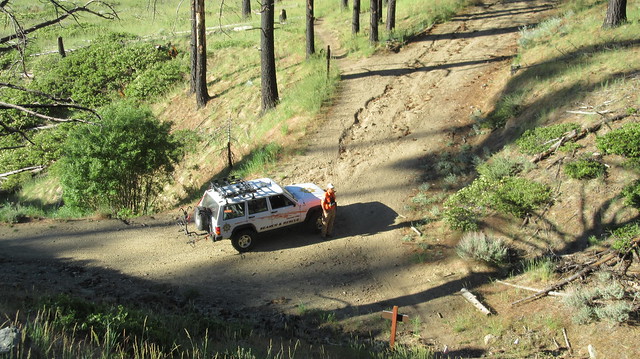 Leaving my shuttle driver behind

Like last year, I spent the weekend up on the mountain providing backcountry support with Carson City Search and Rescue. Partnering with the Carson City Fire Department, we provided first-aid, evacuated riders and bikes as needed, refilled water bottles at the top of the climbs, and communicated race progress over the radio to each other and city and race staff back in town. With three mountain bike teams, and multiple motorized teams all over the mountain, we could get to anyone on the course in a reasonable amount of time. We were the first ones up on the course in the morning, and swept the course at the end of the day. Because of these long days, I missed all the downtown action again, either because it was too late or I was just too tired. I can’t complain, though, having had some of the best seats and views on the racecourse. That, and I hauled my bike up the steep climbs on the back of a Jeep Cherokee all weekend! 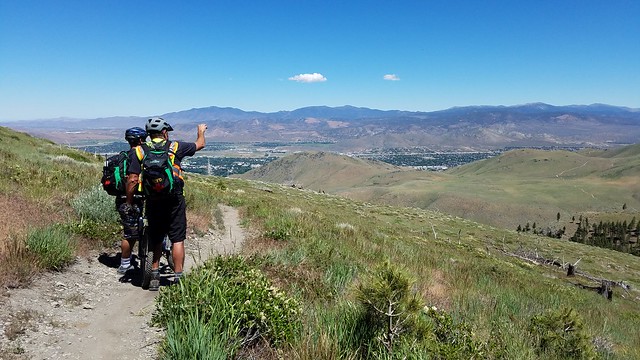 Friday’s event was called the Fun Ride. This 17 mile ride started in the hot afternoon sun, just as a heat wave was moving into the area. It wasn’t technically a race, but of course, many riders were treating it as such for the bragging rights. I think the biggest motivator of the day was getting off the scorching asphalt climb up Kings Canyon Road, and up into the dirt and shade! I had 3 liters of water on my bike, and a few Gatorades in my pack to share with thirsty riders at the top. Some riders just kept rolling, but many people took the time to stop and sit in the shade a bit. This was definitely the most social ride, and it was fun to talk to all the riders as they came through. 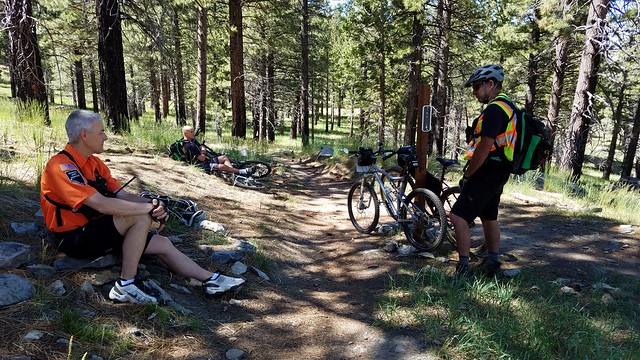 CCSO SAR and CCFD waiting for riders to show up 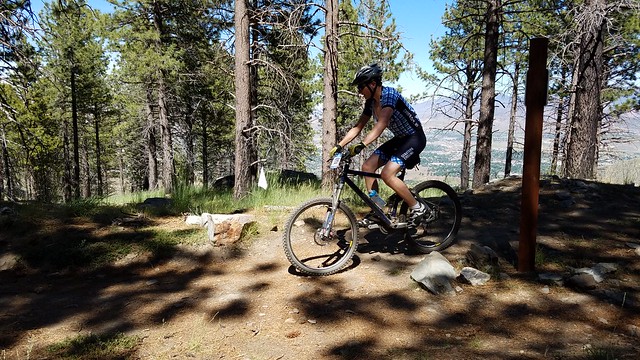 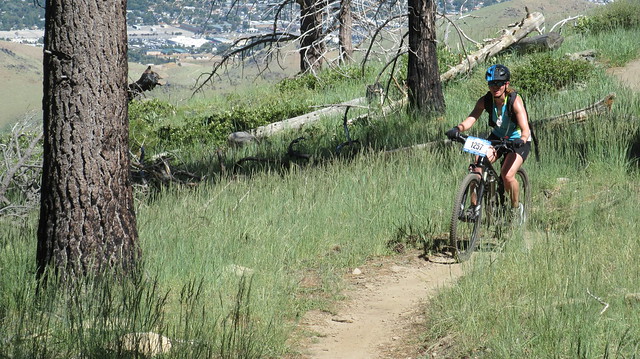 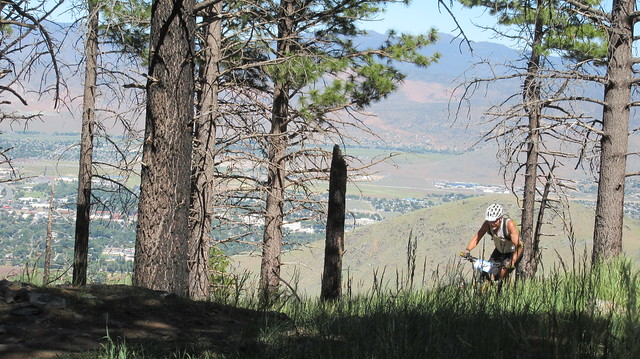 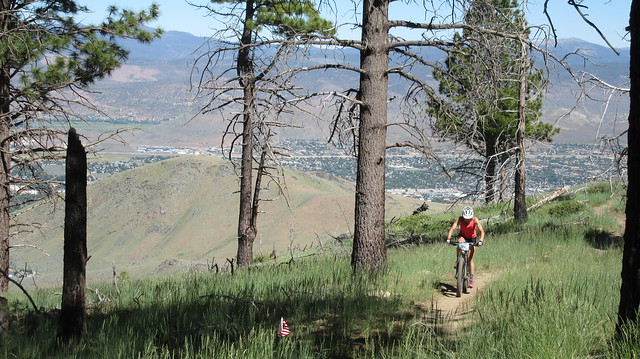 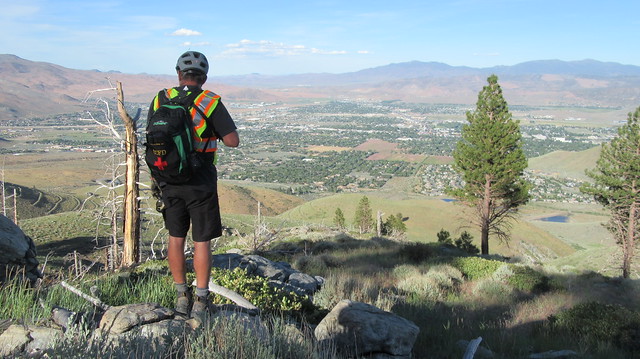 Waiting for the last of the riders to come through

On Saturday were the Amateur 35 and 50 mile races. This group of racers was a mix of riders that were as fast as some of the pros, and those that while not fast, were tough enough to withstand the brutal heat, big miles, and long climbs. After the first of the riders arrived, it was a non-stop parade of bikes until the very end. 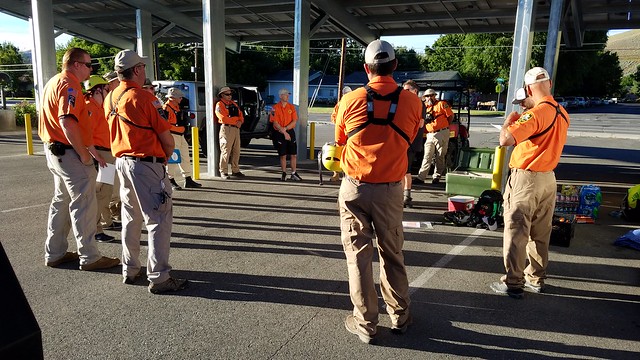 06:15 briefing at the Middle School to go over the rider support plan for the day 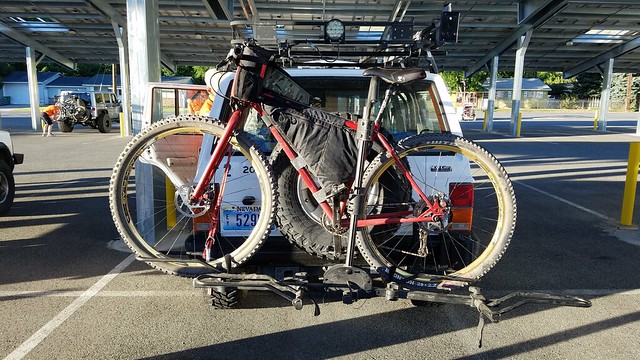 Loaded up for shuttle to the top of the course 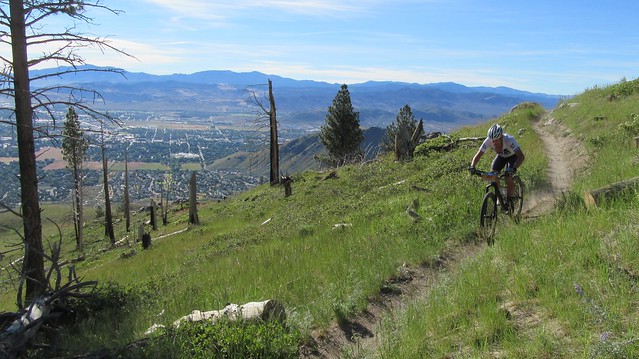 I had seen social media posts from the days before that Lance Armstrong was in town for the event. He had been out riding the course and visiting the local businesses. Lance rode in the Capital 50 on Saturday. He finished 4th, but his name is not listed in the official results. Up on the mountain, most of the cyclists looked the same, and I didn’t even realize I got a photo of him until I started checking number plates later in the day. 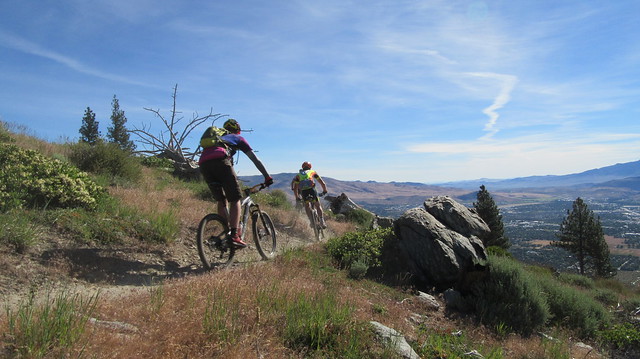 There were definitely polarized views expressed about Lance Armstrong being in town to race, but I would say that most people were excited to have him here. Years ago, I upgraded my cable package just to see him race. In fact, I may not have even watched the Tour de France if he wasn’t racing. For me, seeing Lance race our trails was positive, and a symbol of our city’s evolution and growth. I’ve been riding up in our mountains since I got my first mountain bike in 1989. Mountain Biking was a fringe sport back then, and we just rode our bikes on the existing dirt roads. I’ve been around to see the first 1/4 mile of Carson City mountain bike trail get put in. To go from our humble beginnings to having a cycling legend travel to ride our trails really made me realize how far we’d come. Carson City is definitely on the map now as a riding destination. 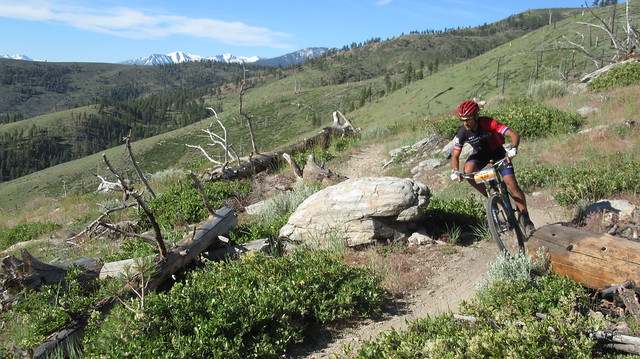 Cesar Chavez on a Single Speed

On Saturday, I was stationed mid-trail on the downhill section between Kings Canyon and Ash Canyon. We didn’t have many people needing water at this location, since they had already topped off at the very top. We did have a nasty corner to deal with, though. While not more difficult in appearance than any other section of the trail, the rocks in this corner were grabbing people’s tires. They’d get the front wheel around the rocks, but then the rear wheel would smack right into them, often accompanied by an exclamation of discouraging words. Some riders tried too had to avoid the rocks, washing the front tire out off the edge of the trail and crashing into a cloud of dust. We had to reattach bike parts, help relocate missing bike computers, and even bandage one rider up. I ended up putting some flagging tape near the corner, but I’m not sure if it helped. 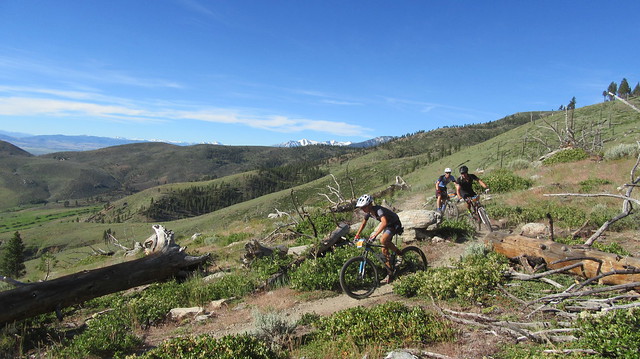 Some riders took as long as 9 hours to complete all their miles, not giving up. With pre and post ride tasks for me to complete, this was over an 11 hour day for me. Thankfully, things wrapped up in time for me to get a nice dinner and do some much needed laundry. It was early to bed, though, to get ready for one more day of racing.

Sunday was the Pro Race. The start time was bumped up an hour to beat the heat, so it was another early morning trying to get to the top of the course before race time. I was still riding down the trail to get into position when I heard the shotgun start from downtown. And then 15 minutes later, another blast signaled the Pro Women start. We wouldn’t have to wait long before they reached the top. 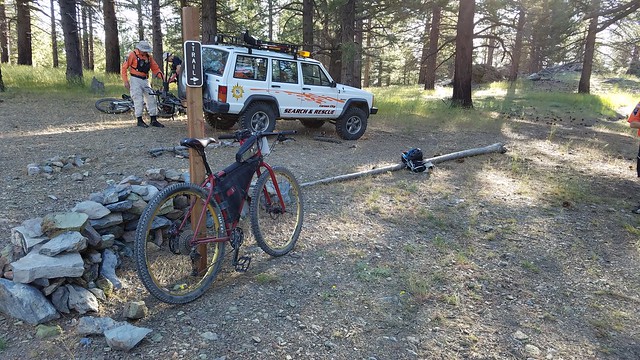 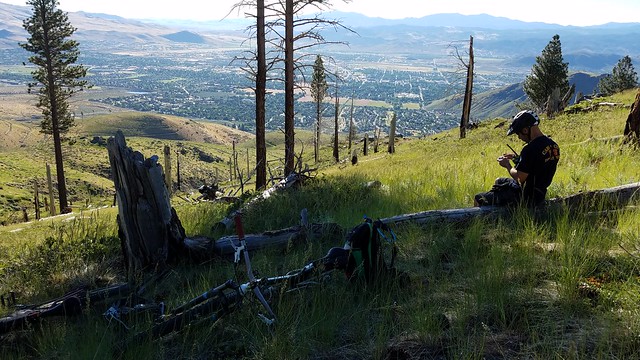 Waiting in the shade for the riders to arrive

The pros came through fast. There was no interaction with the racers this day, it was all business. And unlike the previous days when we saw riders come through consistently every few minutes, the pros traveled in a big pack, passing by us about once an hour over three laps. One pro rider crashed in front of us on our rocky corner. I ran down to see if she was OK, but she sounded more disappointed than injured. She said she was fine, and sped off again down the trail, my only brief conversation with the riders that day. 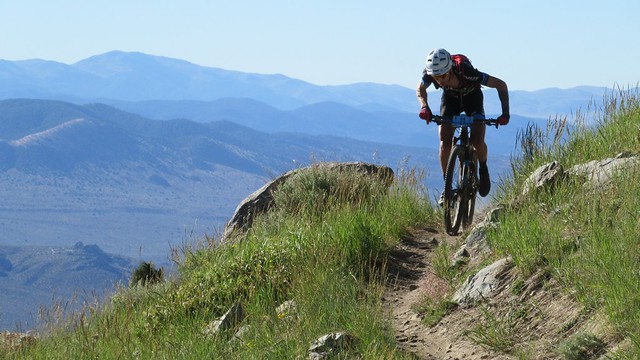 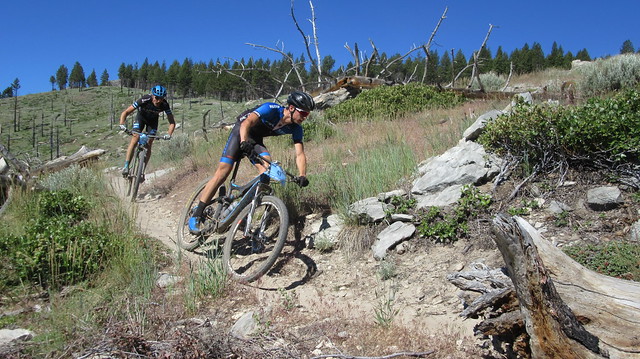 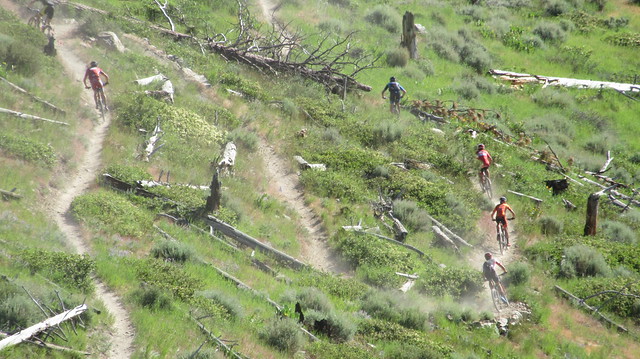 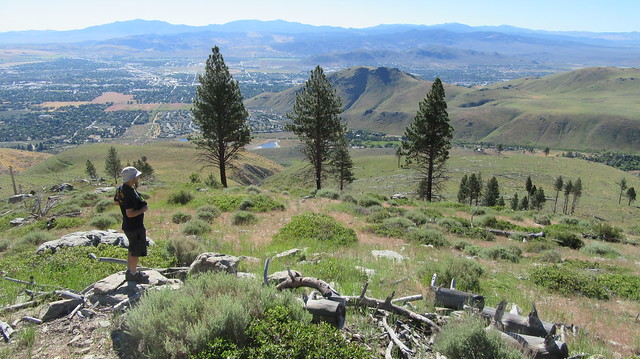 Looking for riders down below 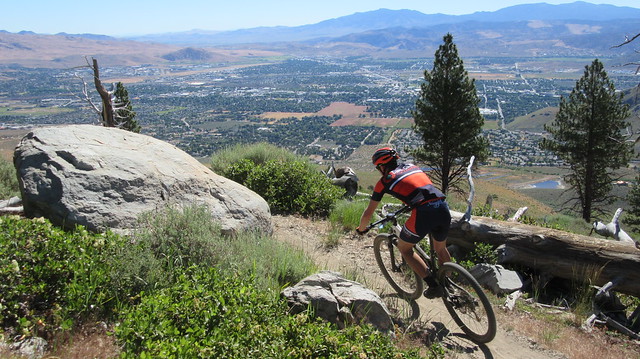 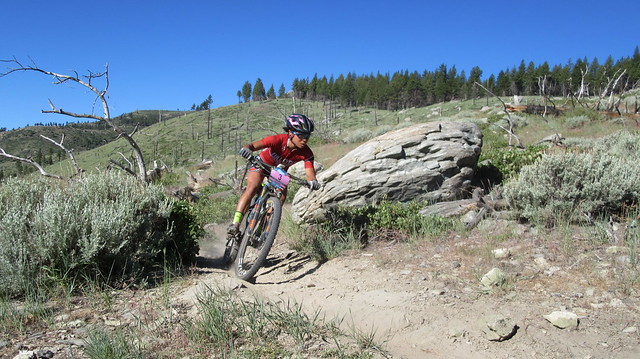 I corresponded with one rider after the event to get her thoughts on how the pros liked the course. I wanted to know what they thought of this loop compared to last year’s grand view of Lake Tahoe from the Tahoe Rim Trail. She said she heard really positive feedback and had much praise for the Carson City trails and rider support. While it was a bummer they didn’t get up to the TRT, she said the course was challenging and fun, the distance going by quickly. She also said she may even miss this course next year if it returns to the original high route! About the only complaint was the HEAT. 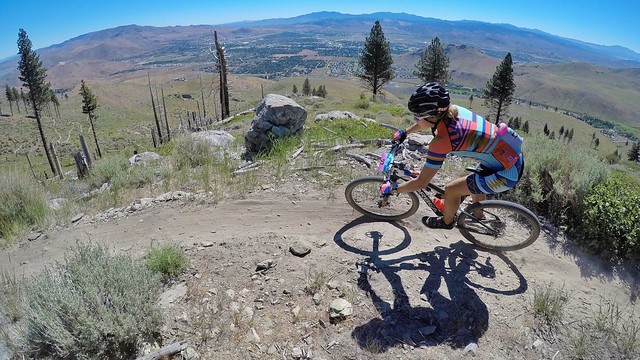 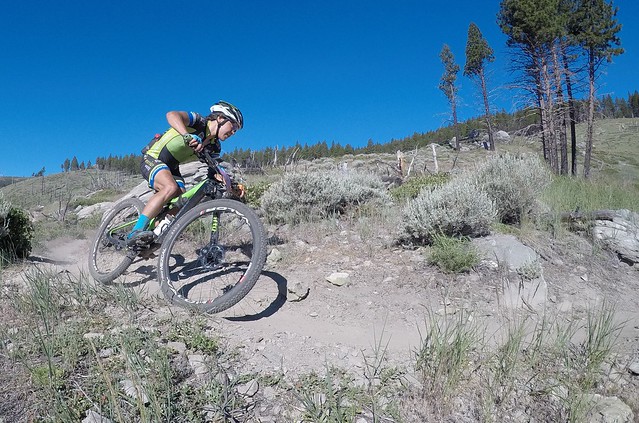 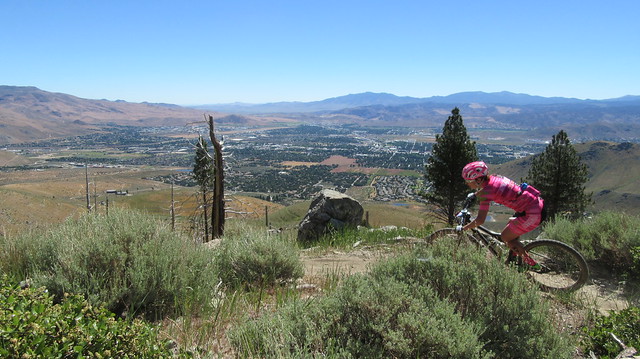 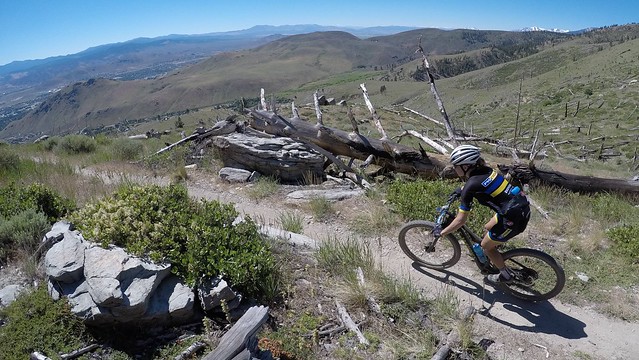 With the exception of high end race bikes getting stolen by traveling bike thieves, the weekend was a huge success. From what I’ve heard, much was tuned and refined from the lessons learned last year, so hopefully there was less disruption to people going about their daily business. It was nice to have a beautiful downtown (it was still under reconstruction last year) with new businesses ready to welcome all the racers. I’m looking forward to hearing about the economic impact of the event. People were talking about full hotels and busy restaurants all over town. I made it out to Sassafras Saturday, and it was packed in spite of being across town from all the action! Next year they plan to raise the ceiling once again on the number of race entries. I see this as an event that will just keep on growing and attracting more and more people. Good job Epic Rides and Carson City! 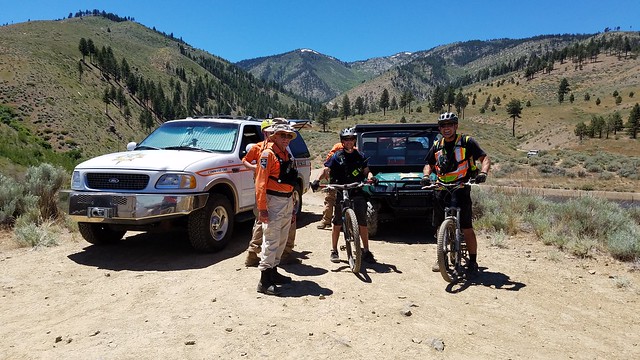 Finishing up the sweep of the course

I only know what happened downtown from all the great photos and stories people have been sharing. Here’s some video I put together from all three days of riding up on the mountain. This should give you a good idea of what the action looked like from the top of the course!