The Carson Sink is an interesting and desolate place. The Carson River terminates here, bringing water and sediment from as far away as the Sonora Pass area in the Sierra. It’s home to the Stillwater National Wildlife Refuge and Fallon National Wildlife Refuge. A Navy Bombing Range shares the immense playa on the northeast corner. Barren and rocky mountain ranges form the borders around the valley. It’s part of the 40 Mile desert between the Humboldt and Carson Rivers, the most dreaded section of the California Emigrant Trail where hundreds of pioneers and thousands of livestock perished in the mid 1800s. In more recent times, there are even stories of UFO sightings. What drew me to the area, though, is the extreme solitude and vast emptiness. Exploring the area by bicycle would be the perfect way to experience the Carson Sink.

Video from our ride:

At the beginning of Fall we took a day off for an adventure in the Carson Sink, heading east from Carson City to the town of Fallon. Fallon has all the services you need before heading out into the backcountry (and also some good restaurants for after the ride!). You’ll want to bring everything you need out there, as there are no services once you’re out in the sink. We brought our fat bikes for this trip, anticipating sandy terrain for much of the ride. 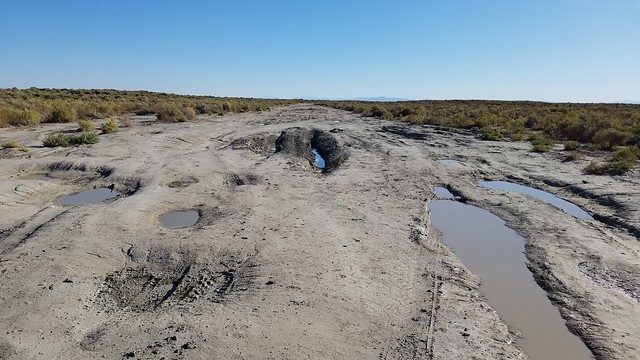 We parked after a while of driving on this. The road near Timber Lake.

After driving east through Fallon, we turned north on Rio Vista (aka Cemetery Road) just past the medical center. This road soon becomes Indian Lakes Road. The road is paved for a while, then becomes a well graded dirt road, suitable for most any vehicle. We passed a few small lakes along the way, many full of birds. 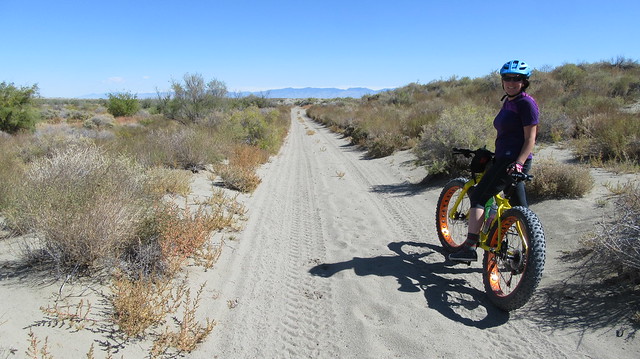 Halfway between Papoose Lake and Timber Lake, the road begins to get rough. Numerous potholes cover the road, and there is evidence of vehicles digging deep holes trying to escape the mud. This is a good sign that it’s probably best to avoid this area when it gets wet! 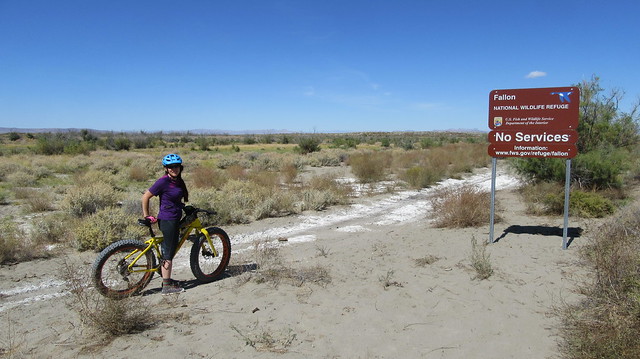 Although it was easy enough to drive around the obstacles with my high clearance SUV, it was just too bouncy for my hitch mounted bike rack. We drove all the way out to Timber Lake, and unloaded the bikes to start our ride. Before heading out, I marked a waypoint on my GPS, so we could find our way back to our vehicle. It’s a huge area and fairly absent of any significant landmarks to aid your navigation. We quickly lost sight of our vehicle once we started riding. 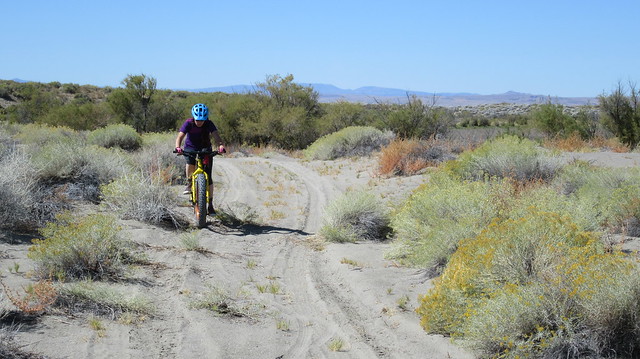 From Timber Lake, we followed the road north toward Duck Lake. We came alongside a ditch filled with stagnant water. After consulting the map I realized this was the last stretch of the Carson River before it dumps into the sink. We then headed east through an alkali flat where we came to an intersection. Continuing east would take us to a playa, and turning to the north would take us to Duck Lake. 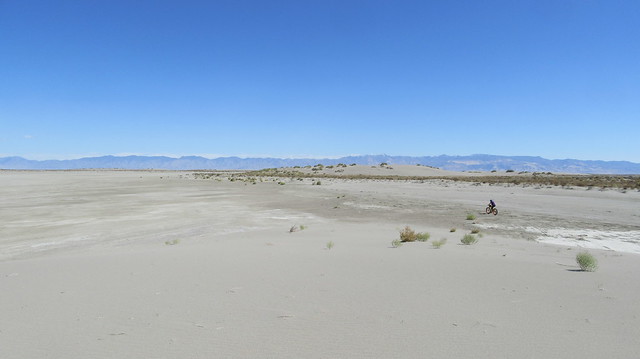 As we were making our decision on which way to go, we suddenly noticed lots of mosquitoes! I quickly decided to stick to the plan and head north to Duck Lake. The mosquitoes seemed to follow us through this area. Making it worse, the progress got slower as the sticker bushes closed in on the road. Luckily the stickers only stuck to the tires and didn’t cause any flats. We finally found a faint double-track leading away east from Duck Lake and out onto the playa where the bugs did not follow. 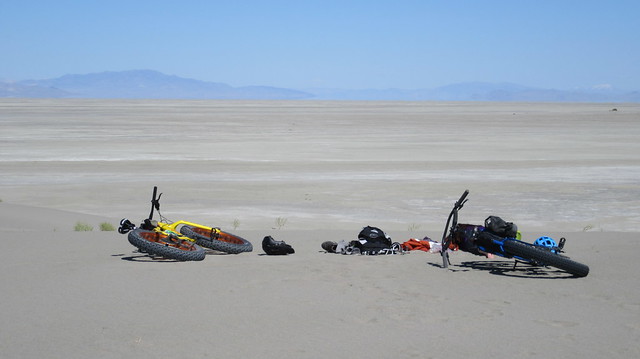 We climbed the nearest sand dune and were treated to an overwhelming view of the Carson Sink playa, a vast open space of nothingness. The map showed that we were on the southeast edge of Battleground Point overlooking Botulism Bay. I haven’t found any information on these landmarks yet, so I’ll just have to use my imagination on how they were named. With the exception of an occasional sand blast when the wind picked up, it made a perfect spot to relax and have lunch. 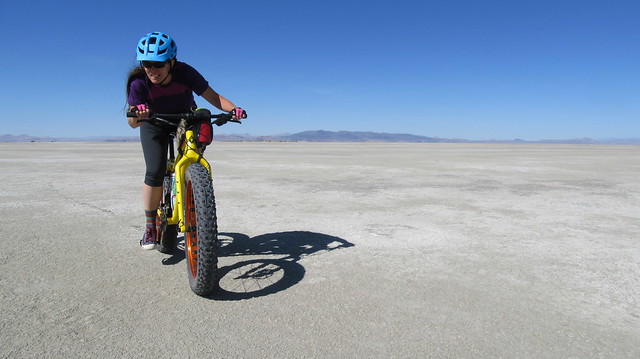 Some flat-landing at 3,876 ft elevation 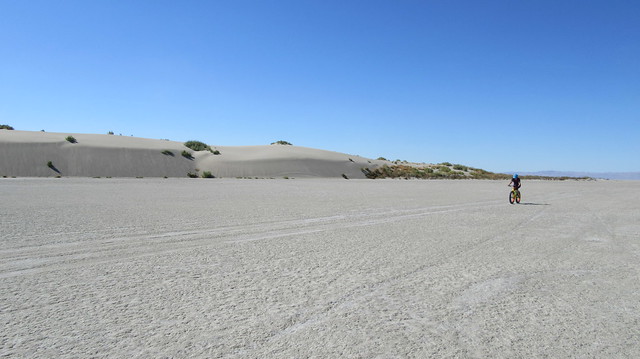 Finding our way through the maze of dunes

Not wanting to retrace our route through the bugs and stickers, we plotted a southerly course along the playa through the dunes to the east. The route was mostly flat, but the spongy playa added some rolling resistance. It was surprising to see so much moisture this late in the year. The sand dune crossings were actually the easiest. Our fat tires floated right over the firm and crusty dunes. We eventually reached a particularly salty playa with a bumpy muddy crust, and followed the truck tire tracks to get across. Without them, we may have had to go around. 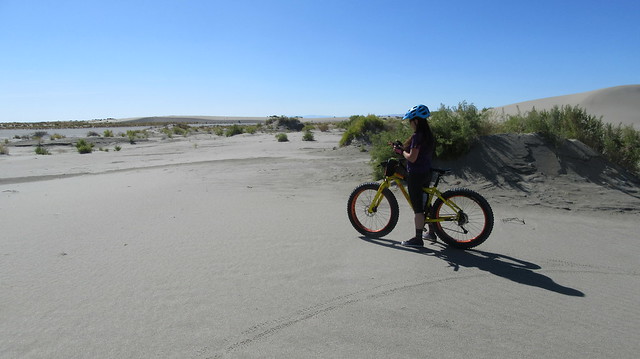 Crossing over to the next playa

We finally joined an east-west road that reconnected us to the road south of Duck Lake. We had bypassed the worst of the stickers and bugs. When I visit again, I will probably just go out to the playa this way in the first place. The map shows a large dune field to the east of our route that looks interesting to explore. Rejoining our route in, it was now an easy trip back to our vehicle on a dry sandy road. 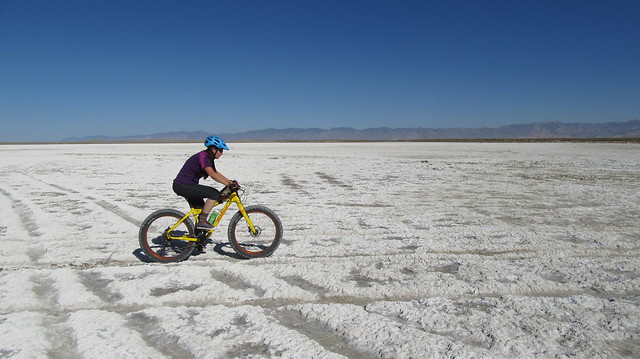 We really enjoyed this ride. The scenery is unique, and there was much solitude. We didn’t see another person the whole day. We’re looking forward to heading out a different direction next time to see more of the area. When the bugs die down, it will be nice to spend some time at the lakes watching the birds. Cell service was hit and miss, but we were still able to get a  message out (your results may vary…). Having a GPS and/or topo map is essential if you’re not familiar with the area. Tall dunes, thick brush, and random roads create a maze that would be hard to navigate without these essential tools. While our fat bikes were really helpful on the soft terrain, I think regular mountain bike tires would do OK for a lot of the roads out here if you don’t mind walking occasionally. And most importantly, bring along plenty of water! 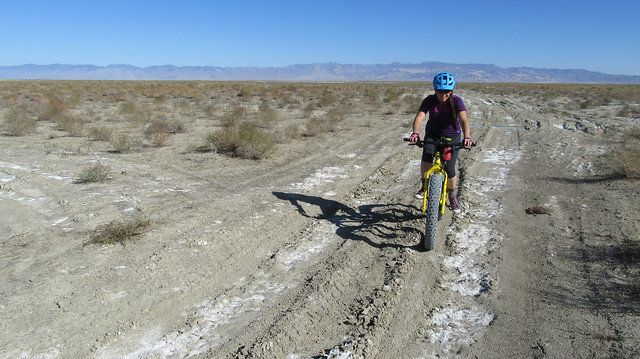 <
Stillwater Range to the East

Mosquito Alert! While I only got a couple bug bites along the way, my wife suffered over 40 bites! They even bit mostly through her thin clothing rather than directly on exposed skin. We really hadn’t expected too many bugs after the cold weather we’ve been having, and we were caught off guard. Be sure to cover up with bug-proof clothing and have some bug repellent handy. The dune and playa area is mostly bug-free, so you may want to spend most of your time out there until the bugs are gone. 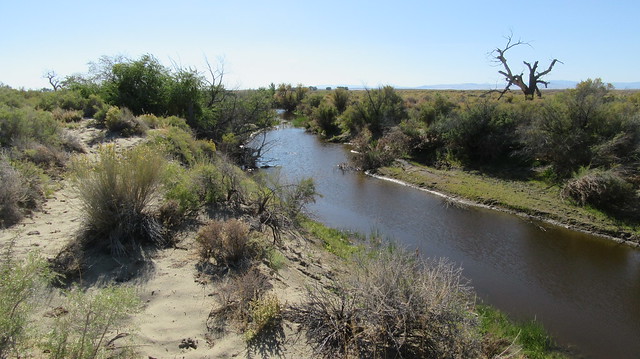 What’s left of the Carson River

The best information on the area is on the National Wildlife Refuge websites. There is a lot of good travel and wildlife information here, but also area rules and regulations that need to be followed when entering the refuges. The area’s primary purpose is to protect wildlife, so it’s important to become familiar with this information before visiting.

One thought on “Exploring the Carson Sink”