On October 13th, we did our annual ride to Virginia City. 17 riders showed up, a mix of veteran VC Riders, first-timers, and even a few folks new to Carson City! A chilly morning gave way to sunny blue skies as we gathered at the Centennial Park Trailhead, allowing jackets to be shed before ride time. We left about 09:15, ready to explore the Nevada trails and backroads. 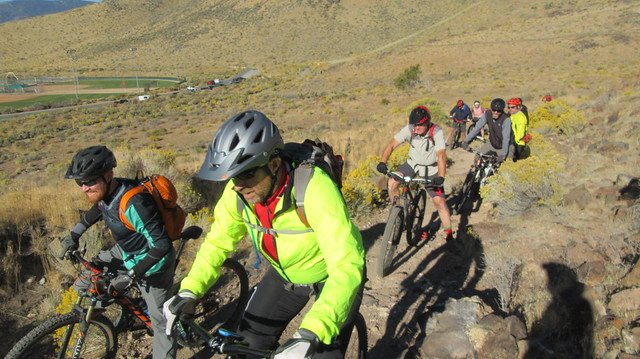 The ride was not a whole lot different from previous rides, but that’s a good thing. All the elements were there that make this ride so fun: wild horses, steam engines, buildings and relics from the Old West, and the colorful cast of characters in Virginia City. It’s a ride organizer’s dream, knowing that people are almost guaranteed to have a great experience. As usual, the casual paced ride was a rolling social gathering for riders to get together that don’t see each other often, but also the opportunity to make new and lasting friends. Also of special note for me, is that my son finally got to join us for the ride! Seeing him complete the ride and having a good time was my favorite part of the whole day. 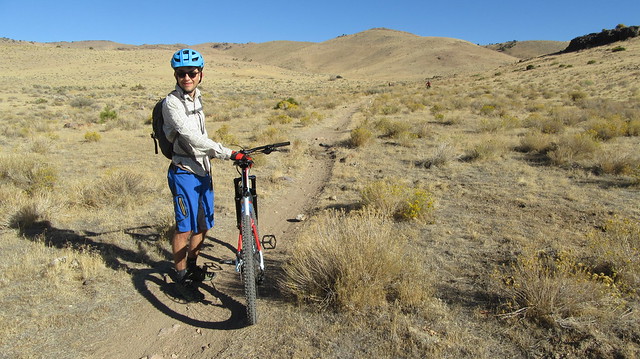 Breaking in a brand new bike! 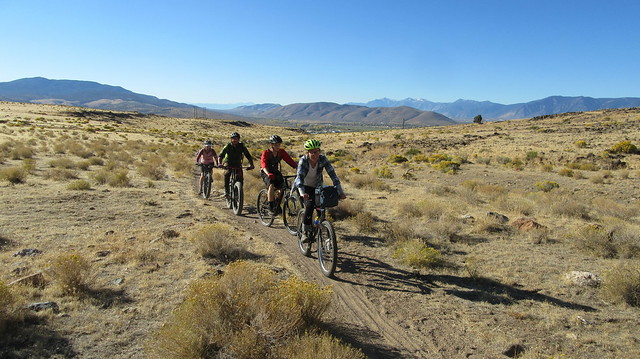 Most Classic Bike: This late 80s or early 90s Specialized Rockhopper made the trip with bike and rider still in one piece! 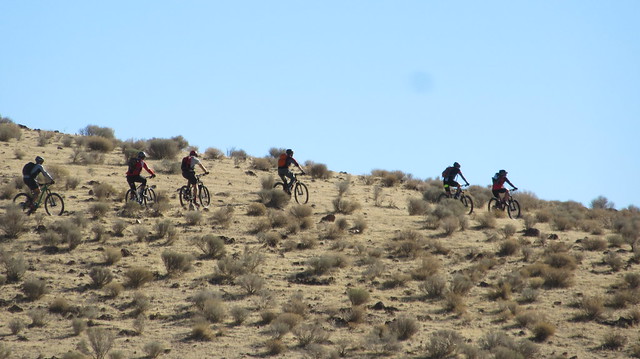 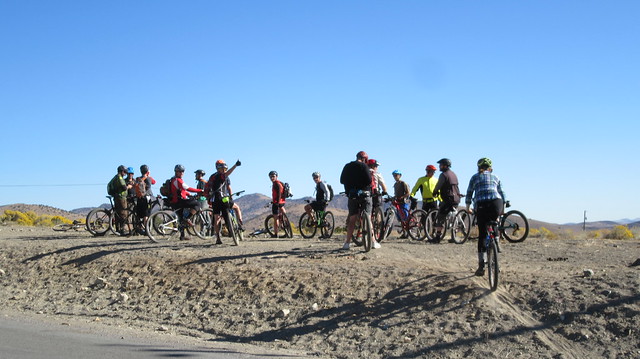 The group arriving in Mound House 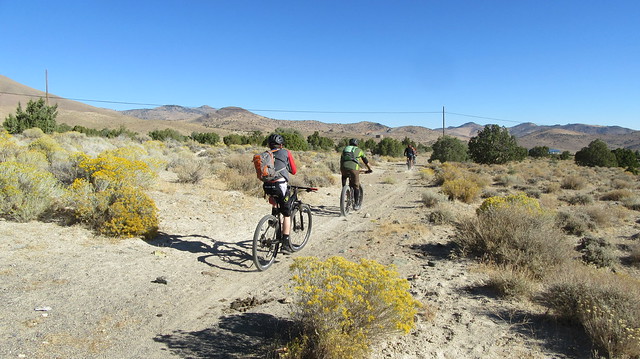 Cruising the outskirts of Mound House 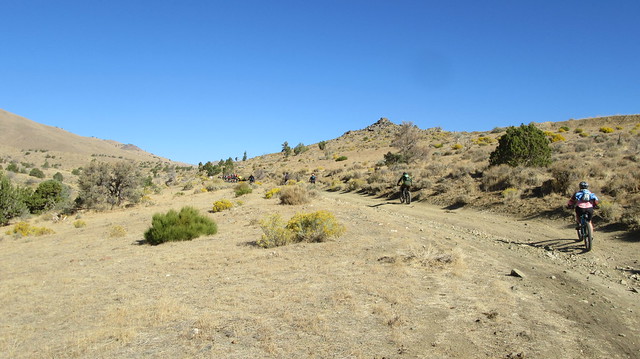 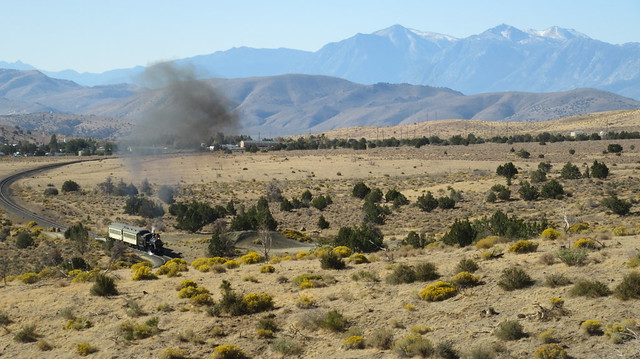 The V&T Engine making its way up to Virginia City

There’s always something odd to take away from this ride. This year’s “What the heck??” award goes to the abandoned and bullet-ridden limousine near Mound House. It’s common to see vehicles dumped in the desert, but one would think that someone would notice or be concerned if their limo was missing. The vehicle was too far down the hill from our route to investigate further, but I still wonder what might have been in that trunk… 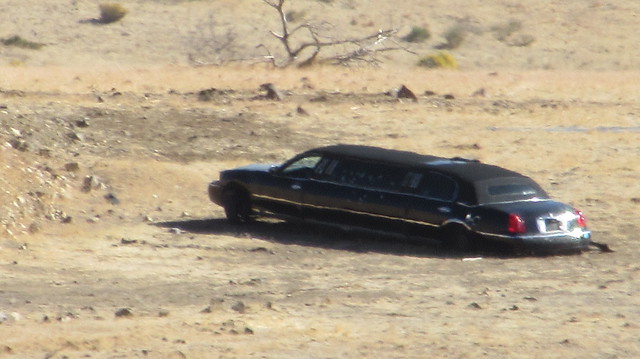 A bullet ridden limo? Nothing to see here, folks! 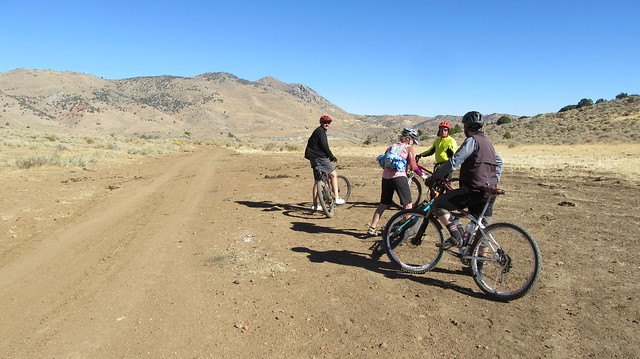 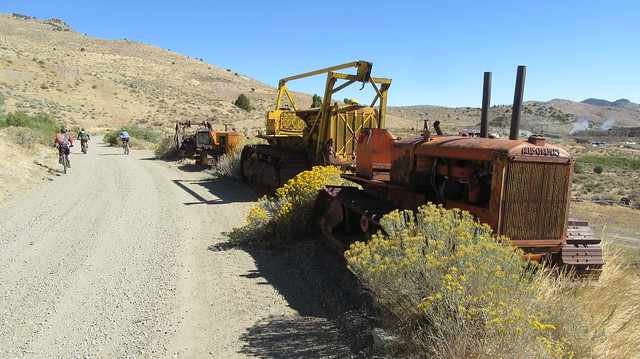 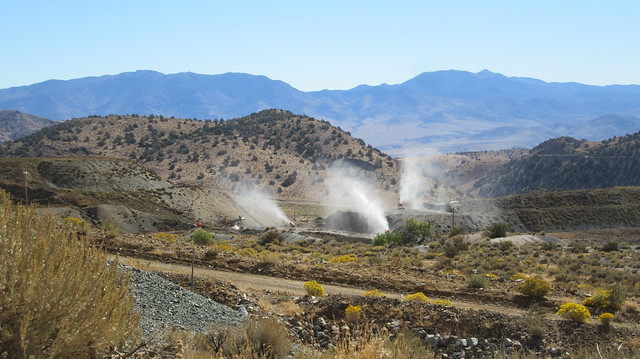 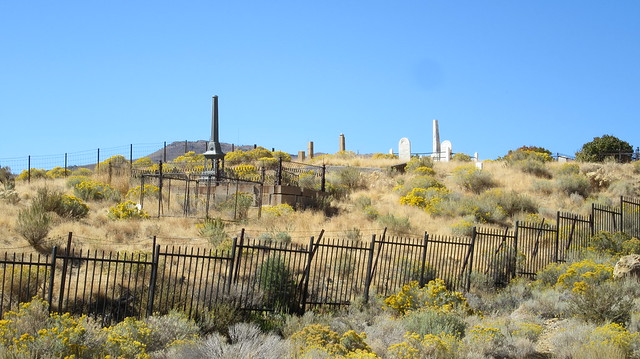 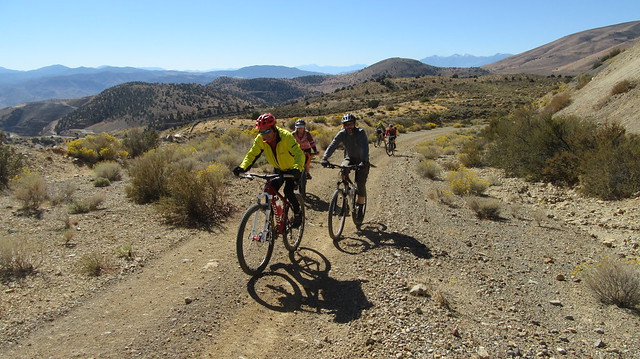 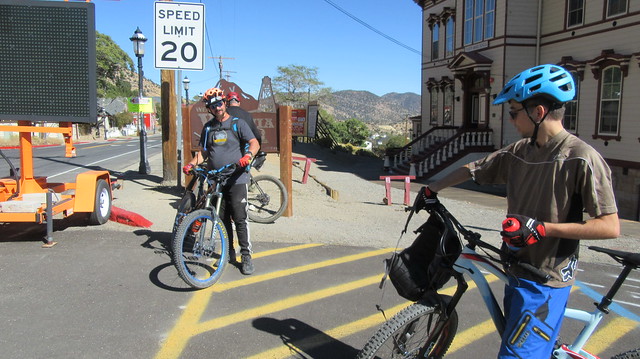 When we got to Virginia City, they were about ready to start the 2018 Redrun. It at first looked like a regular run, but then we started to notice all the costumes. According to the website, it’s a run mixed with puzzle solving while trying to avoid the zombie hordes that chase you along the way. We would’ve loved to see it kick off, but the urge to get to the Red Dog Saloon was even greater. Pizza and brews were calling! We did see some of the event on the way out. On such a warm and sunny day, though, it was hard to take the zombies too seriously. It may have been a different story after dark. 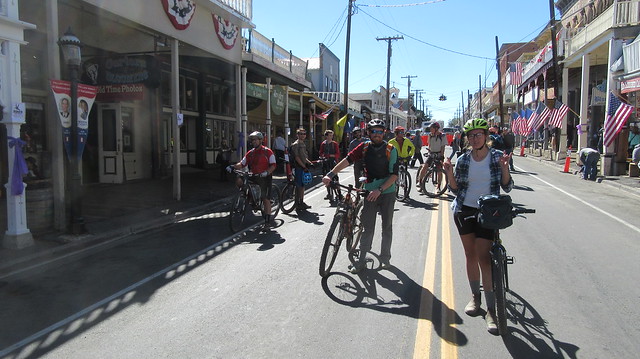 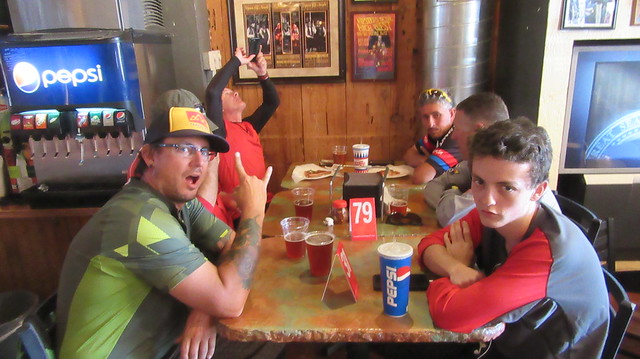 Lunch at the Red Dog Saloon 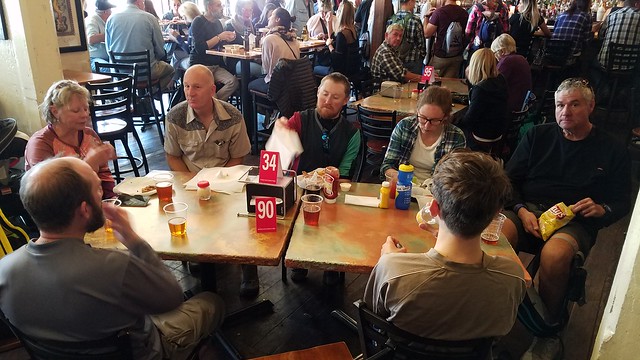 Waiting for lunch at the Red Dog Saloon 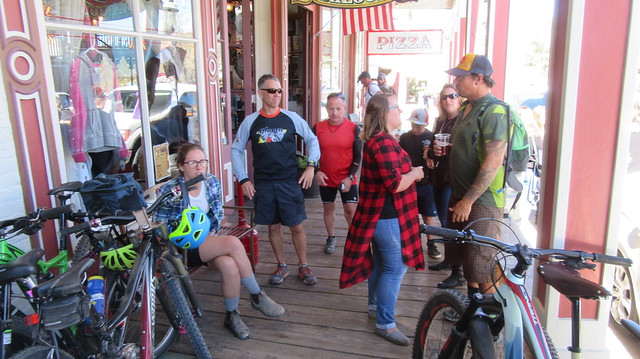 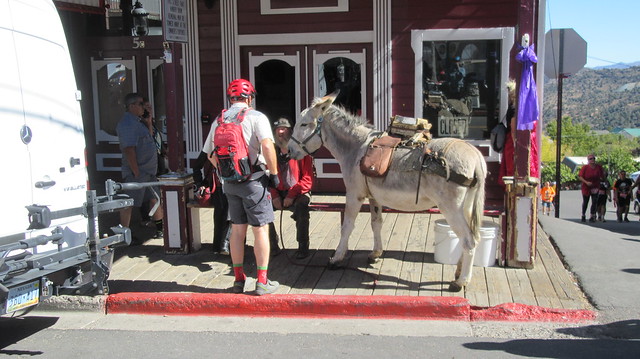 Asking the locals for directions 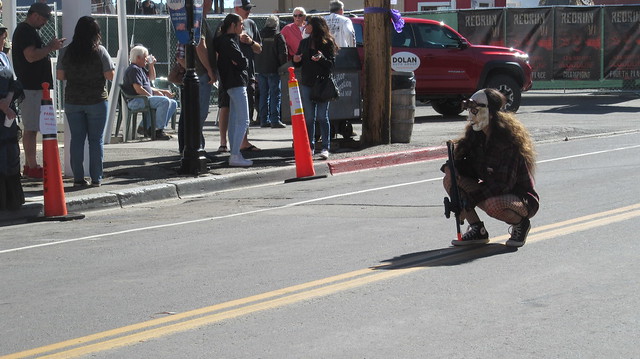 A zombie hunter (or hunting zombie?) at the Redrun 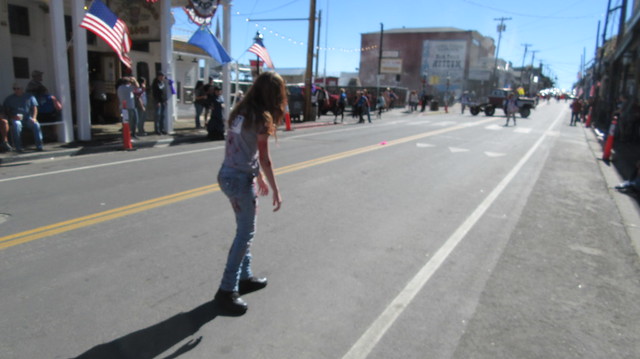 A zombie creeps down main street 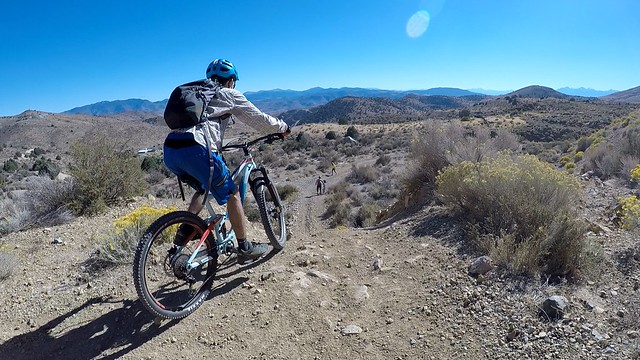 This slippery hill was much easier to ride than walk! 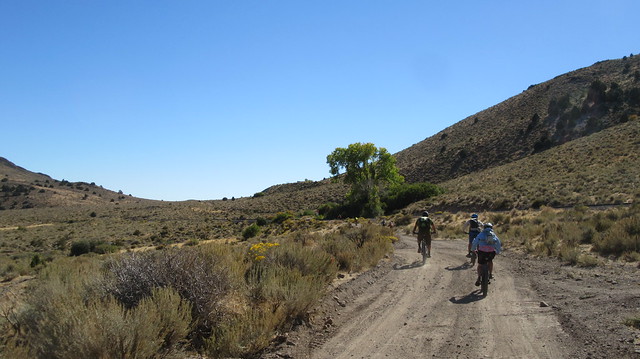 Back across American Flat 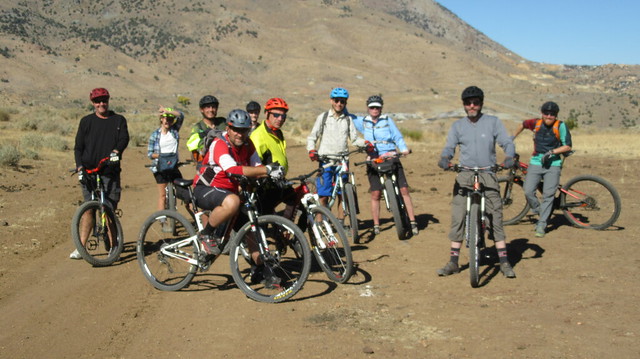 Some of the gang at the south end of American Flat 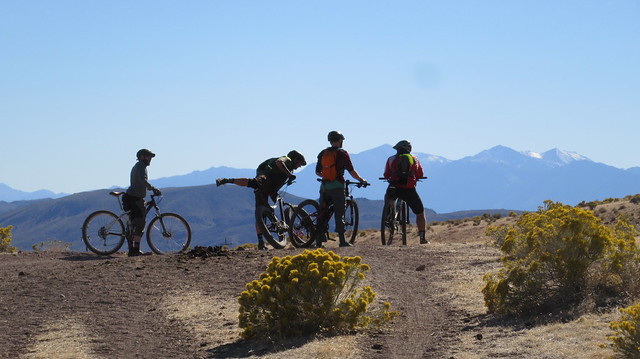 Jobs Peak, Jobs Sister, and Freel Peak (highest mountain in the Tahoe Basin) in the distance

You can pretty much guarantee you’ll see wild horses on this ride, but this year I think I saw more horses than on any previous trip up there. We even had a few walk right up to us while we were stopped. There are plenty of open grassy areas, and the last two winters have left the water sources full even this late in the year.  It’s easy to see why there are so many horses in this particular area. The wild horses are a somewhat controversial topic in Northern Nevada, but I always enjoy seeing them. 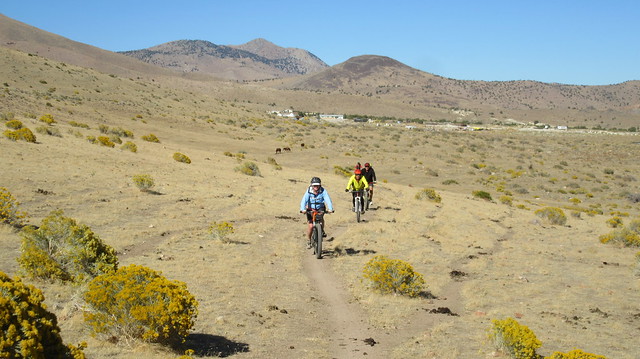 Passing by the wild horses in Mound House 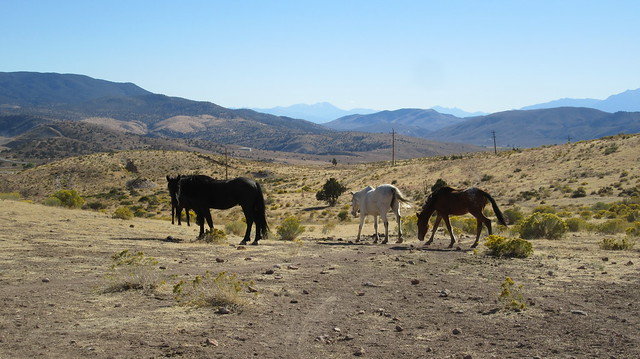 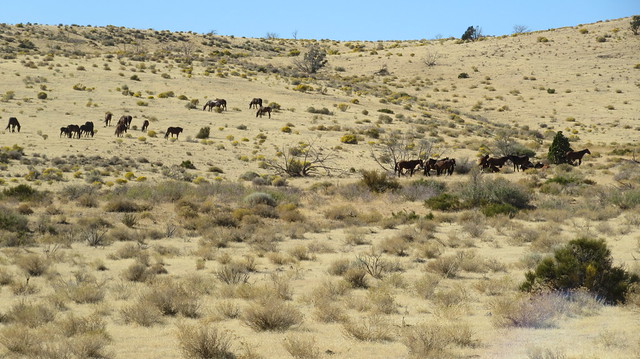 Biggest herd of horses I’ve seen in Mound House! Even more off camera…

Once again, another awesome ride to Virginia City is on the books! Thanks to everyone who showed up to ride. More information about our route can be found on last year’s post here.

One thought on “Mountain Bike Ride to Virginia City 2018”